Who is Liz Truss, the U.K.’s next prime minister? 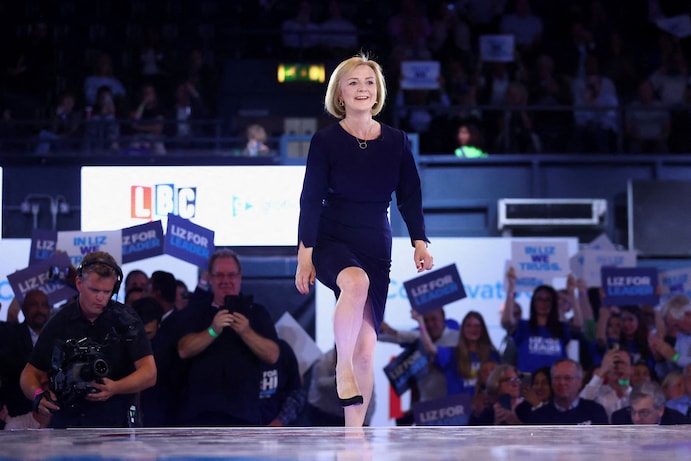 LONDON — The next prime minister of Britain will be Liz Truss, whose political journey began on the left — down with the monarchy! she cried — only to arrive on the right, as a hard-line Brexiteer who has tried to channel the Iron Lady herself, Margaret Thatcher.

Truss has held six ministerial posts under three prime ministers, including 11 months as foreign minister. Yet after her years of public service and a summer making her pitch to Conservative Party activists, many Britons confess they don’t really know Truss. Not the way they knew Boris Johnson — former London mayor, newspaper columnist, colorful orator, serial prevaricator — when he took office just a few years ago.

It’s fair to say Truss is a shapeshifter. She fought for Britain to remain in the European Union before becoming a staunch defender of Brexit. Her supporters say she accepted the outcome of the 2016 referendum and got with the program. Others say she’s a weather vane, pivoting when it suits her advancement.

She’s been called “ambitious” by her critics. Truss responds that’s what they always call women who rise.

Unpopular in Moscow — and Brussels

Truss is a reliable NATO ally and Ukraine supporter, talking tough on Russia and Vladimir Putin. She’s led the charge on sanctioning oligarchs — many who had been living the high life in London.

But she has stumbled. In a BBC interview at the start of the war, she endorsed, “absolutely,” the idea of Britons going to fight in Ukraine — a remark that the British defense establishment vehemently shot down.

Russian Foreign Minister Sergei Lavrov argued that Truss was a prime example of how the West didn’t understand the basic geography of the conflict, after the British foreign secretary appeared confused in a February closed-door meeting about whether two territories — Rostov and Voronezh — were in Russia or Ukraine. British officials said that Truss had misheard Lavrov and that the alleged gaffe was Russian propaganda designed to distract from its aggressions.

While unpopular in Moscow, Truss is also not big in Brussels. She’s seen as an agitator, an anti-Europe opportunist who could make matters even worse in the rocky relationship between Britain and the 27-nation bloc.

“The jury is still out,” Truss said last week, on whether French President Emmanuel Macron was “friend or foe” — a remarkable diss for one the U.K.’s closest trading partners.

Macron responded, “If the French and British are not capable of saying whether we are friends or enemies — the term is not neutral — we are going to have a problem.”

When she became foreign minister a year ago, there was hope in Europe that she might prove a fair partner, said Mujtaba Rahman, managing director for Europe at the Eurasia Group, a political risk research and consulting firm.

Instead, she pushed forward plans for a unilateral rewriting of a key part of the post-Brexit agreement, the Northern Ireland Protocol, outraging European officials.

“The E.U. feels quite burned by Truss,” Rahman said. “She brings a massive trust deficit to the relationship from day one.”

In Washington, at least outside of diplomatic circles, there’s not much of an official take on Truss. She wants a trade deal with the United States — which the Biden administration is in no rush to negotiate. The White House is also wary of her moves on Northern Ireland.

Winning over Tories with tax cuts

The 47-year-old Truss promises to slash taxes and boost borrowing, even as inflation soars past 10 percent and the Bank of England forecasts a protracted recession by year’s end — alongside an energy price spike set to quadruple the heating bills for homeowners and businesses.

No matter. This was not a general election but a selection by 172,437 Conservative Party members — about 0.3 percent of the British population — who are older, wealthier and 95 percent White and more to the right than Britain as a whole.

They were the ones choosing between finalists Truss and Rishi Sunak, whose resignation as chancellor of the Exchequer, or finance secretary, helped launch the revolt against Johnson.

Truss’s brother Francis told BBC in 2017 that his older sister was always confident and opinionated, and hated losing, even at Monopoly.

“She was someone who had to win. She would create some special system to work out how to win,” Francis said.

She has, once again, figured out a path to victory.

“She’s said the kind of things that Conservative Party members like to hear,” said Jonathan Tonge, a politics expert at the University of Liverpool.

It also helped Truss that, unlike her rival, she stayed loyal to Johnson, who remains popular with the grass roots, who already confess they miss him. If Johnson had been on the ballot, he would have had a good chance of winning.

From liberal to conservative, with many strong beliefs along the way

Another point in Truss’s favor: Compared with Sunak, she has more humble origins.

Truss alluded to Sunak’s pricey private education — a sensitive topic in class-conscious Britain — in contrast to her state high school in Leeds, where children were “let down,” she said, with “low expectations, poor educational standards and lack of opportunity.”

It was this experience that she said eventually led her to move right. “It’s the reason I am a Conservative,” she said.

She describes her parents as “left-wing activists,” her father a professor of pure mathematics at the University of Leeds and mother a nurse and local leader of the Campaign for Nuclear Disarmament.

Several former teachers and students have disputed her description of her high school.

Dave Hendry, who was a year behind Truss at Roundhay School, told The Washington Post that he doesn’t recognize her account. “I had the complete opposite experience, with teachers there for me, helping me,” said Hendry, who still lives in the affluent area in northeast Leeds.

He said he’d love for his three young children to get into Roundhay. “If it’s that bad, how come they gave her extra tutoring to get into Oxford? I think she’s just trying to score political points.”

After high school, Truss studied politics, philosophy and economics at Oxford University — like many prime ministers in the making before her.

She was president of the center-left Oxford University Liberal Democrats, and it was at a Lib Dem conference in Brighton in 1994 that she called for abolishing the monarchy. “We do not believe people are born to rule,” she told delegates.

She has since described the royal family as “essential” to Britain.

Neil Fawcett, now a Liberal Democrat councilor, worked with Truss during that time.

He told The Post: “She’s one of the most difficult people I’ve ever worked with. She’s extremely strong-minded and takes fixed positions and won’t be moved from them, even if there’s clear evidence that what she wants won’t work.” He added that it was also “very difficult to tell what she actually believed. She took strong positions to play to whatever audience she was speaking to.”

Marc Stears, Truss’s tutor at Oxford and now director of a policy lab at University College London, offered a similar account in the Times of London. He wrote that in their tutorials, Truss “demonstrated an unnerving ability to surprise” and was “self-consciously unconventional.”

“Truss lacks the media élan of Tony Blair and David Cameron. She lacks the dogged determination of Gordon Brown or the patient, long-term vision of Margaret Thatcher,” he wrote. “Her most noticeable characteristic is a capacity to shift, unblinkingly, from one fiercely held belief to another.”

Truss explains her political positions before joining the Conservative Party in 1996 as youthful indiscretions.

She told the BBC, “When I was in my youth, I was a professional controversialist and I liked exploring ideas and stirring things up.”

Speaking to an audience of Tories last month, she said: “People may know about me that I have a bit of a dubious past … We all make mistakes, we all had teenage misadventures, and that was mine. Some people have sex, drugs and rock-and-roll, I was in the Liberal Democrats. I’m sorry.”

She uses the line often — and it always gets applause from her party members.

What sort of prime minister would she be?

In recent years, British politics could be described, judiciously, as a little crazy. Brexit, lockdown parties, scandal. Three prime ministers in six years. David Cameron, Theresa May, Boris Johnson. Gone, gone, gone. Each one done in by their party. Or as some Conservative Party members themselves describe it: “Tory psychodrama.”

Will Truss steady the ship? The assessments are mixed.

Wallace said, “She stands her ground. She is straight and means what she says.”

Dominic Cummings, Johnson’s former chief adviser, who helped bring down his former boss, has called Truss “a compulsive leaker” and “a mad box of snakes” and “a human hand grenade.”

Cummings told UnHerd, a center-right online outlet, that Truss would be an “even worse” prime minister than Johnson.

Her standing on the continent is such that Politico Europe, a Brussels must-read, recently ran a piece headlined, “Does the whole world hate Liz Truss?”

Probably not. Most of the whole hasn’t even heard of Liz Truss. But when she enters 10 Downing Street on Tuesday — after curtsying to the queen — they soon will be able see where she wants to take the country.