Where Will Erdoğan Strike Next? 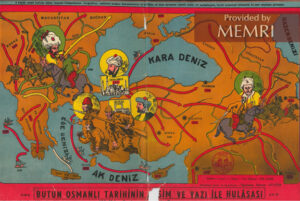 Turkey’s economy, like that of many countries, is in trouble. The decline has been clear even before the coronavirus appeared, but the pandemic and the resulting economic fallout have only made matters worse.[1] The country’s economy will shrink for the first time in a decade and the government will post a record deficit.

Turkey has so far weathered this financial storm thanks to support from Qatar and China. Qatari hard currency has enabled all of the Turkish regime’s military adventures over the past years. Qatar had already offered credit to Turkey in 2018, when U.S. sanctions as a result of the Pastor Brunson affair loomed.[2] In May 2020, Turkey obtained from the Qataris a tripling of a hard currency swap agreement, raising it from five to 15 billion Euros. In June 2020, the Turkish Central Bank accessed Chinese currency for the first time in a similar, but presumably far less lavish, agreement.[3] Qatar’s support for Turkey, across all fields, is as massive as it is essential.[4]

While the Turkish Lira may be floundering, the nearly 20-year regime of President Recep Tayyip Erdoğan is flexing its political and military muscles. The controversial reversion of the ancient Byzantine basilica of Hagia Sophia into a mosque may have been decried in the West, but it has, as expected, proved popular in Turkey, cowing secularists, and received with feverish adulation by Islamists elsewhere.[5] Turkey will no doubt continue with its interventions in Syria, Iraq and Libya. But what might the Ankara regime do next in its ceaseless quest for a greater place in the sun?

The likeliest options are indeed more of the same: expansion of the pro-Turkish GNA-controlled zone in Libya in defiance of efforts to prevent this by Egypt, the UAE and Russia; expanding its border zone in Syria and ethnically cleansing it of Kurds and religious minorities as has happened in Afrin; and creating a more aggressive cross-border military presence in northern Iraq. But Erdoğan has big dreams, befitting a man compared in Turkish propaganda videos as the latest in a line of conquerors stretching back to Sultan Alp Arslan, who seized most of Anatolia from the Byzantines in the 11th century.[6]

Also sure to continue, despite criticism from Turkey’s lively if often assailed political opposition, are efforts to limit dissent, such as the country’s new social media law passed by the Islamist-Nationalist majority in Turkey’s parliament.[7] But this is part of an ongoing repressive trend, that includes being a major jailer of Turkish journalists.

There are three new possible areas for Turkish regime to expand. All three seem, on the surface, rather far-fetched – and yet we know that all three are under open discussion among supporters of the regime near and far.

The first and only domestic item would be: What can the regime do to further advance an Islamist agenda inside Turkey? There are no more hugely symbolic buildings like Hagia Sophia. There is the question of the Caliphate – abolished almost a century ago, in March 1924 by Ataturk. This is an issue that was hugely controversial at the time and remains so both inside and outside Turkey.

On July 26, Abdurrahman Dilipak, an Islamist who writes for the Yeni Akit daily, tweeted the cover of the latest issue of Turkish weekly Gerçek Hayat (“Real Life”). The cover reads: “If not now, then when; if not you, then who? Gather for the Caliphate.” The Ankara Bar Association filed a criminal complaint against Dilipak and those in charge at the weekly for “calling for a rebellion to remove the constitutional order.” An AKP spokesman distanced the party from the controversy.[8] However, the hashtag “#TheCaliphateIsNot[Just]ADream” reached the No. 1 trending spot in Turkish on July 27. 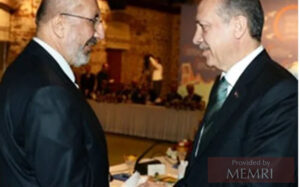 A small protest in favor of restoring a caliphate in Turkey took place on July 27.[9] The protesters used the hand signal of the İslami Büyük Doğu Akıncılar Cephesi (“Islamic Great East Raiders’ Front,” İBDA-C), a Salafi-jihadi group opposed to the secular Turkish state and that has carried out attacks in Turkey for decades, targeting civilian targets such as Jews, Christians, secularists, statues of Ataturk, bars, and tobacco shops. Some Turks have said that while police regularly use pepper spray on, for example, activists protesting violence against women, nothing was done to inhibit this particular protest.

There is no doubt that there is a pro-Caliphate constituency in the Muslim world, but a recent poll showed most Turks opposed to the idea, as are Erdoğan’s Nationalist allies.[10] It is possible that the powerful Religious Affairs Directorate (Diyanet) could be reconfigured to somehow provide guidance to Sunni Muslims worldwide, but this seems unwieldy and unlikely to succeed, and invests someone else with tremendous potential power. Diyanet is the direct descendant of another Ottoman religious role abolished in 1924, that of Sheikh ul-Islam. A safer course would seem to signal openness towards an eventual Caliphate while further enhancing the already considerable role Diyanet plays in Turkish and regional affairs. Diyanet’s budget has already quadrupled over the past five years.[11]

On the international stage, two areas of growing concern are the Christian countries of Greece and Armenia, both of which share a lot of history with Turkey. That small Salafi group of pro-Caliphate demonstrators in Istanbul also called for the abrogation of the 1923 Treaty of Lausanne, which, among other things, delineated the current border between Turkey and Greece (Turkey also gave up claims to places such as Libya and Northern Iraq in this treaty). The Turkish president himself has echoed the call of marginal Salafi groups about tearing up peace treaties and called for Lausanne to be “revised.”[12]

But surely intervention in both those countries would seem to be both unlikely and reckless. Greece is an EU member and also a fellow NATO member. Armenia is protected by Putin’s Russia. Turkish intervention in other places has tended to follow a certain pattern – aggressively pushing against air and sea barriers directly, creating a sense of ambiguity and alarm, while carrying out intervention using proxies, as has been done with Syrian Islamist fighters in Libya.

Under Erdoğan, the regime has been aggressively nurturing a sense of irredentist grievance against Greece, particularly about the Greek islands.[13] Turkish military aircraft have violated Greek air space in the Aegean Sea tens of thousands of times since 2006, and 2019 was the worst year yet, with 4,627 incidents.[14] Islamist and nationalist circles inside Turkey cheer this intervention; one told Al-Jazeera recently that “Turkey has started to act in the Greek Islands. As we speak on this show, Turkish fighter planes are flying over the Greek Islands for the first time. We will see something big happening there. Turkey will reclaim the rights that have been stolen from it everywhere!”[15]

But if Turkey follows the pattern it has established elsewhere, it needs proxies, perhaps in the form of desperate refugees it threatened, and indeed tried, to unleash on Greece earlier this year – perhaps seeking to promote border chaos where Turkey would then intervene for “humanitarian reasons.” Such a plan could well infiltrate unhappy migrant populations on islands such as Lesbos, where migrants now make up a third or more of the population, in order to provide cover for intervention.[16]

If poor and desperate refugees could serve as a Turkish trojan horse against Greece, against Armenia Turkey has Azerbaijan, an entire country to use as a proxy. Locked in conflict with Armenia for decades over ethnic tensions and over the historically Armenian but internationally recognized as Azerbaijan territory of Nagorno-Karabakh (called Artsakh by Armenians), the war recently flared up again, with Turkey’s Defense Minister promising that Armenia would “pay” for the latest incidents.[17]

As tension soared, Turkey now has moved from rhetoric to action, in the guise of weeks-long “giant” war games with Azerbaijan,[18] mobilizing ground troops and aircraft (F-16s and attack helicopters) inside Azerbaijan.[19] Turkey is, easily, militarily dominant in the region, although Russia has aircraft and a local motorized rifle brigade stationed inside Armenia.[20] While Russia would likely react to direct Turkish intervention in this ongoing conflict, an eventual low-scale Azeri-led escalation, coupled with an even deeper Turkish engagement with the Azerbaijan armed forces, is quite possible. Whatever the scale of the Turkish commitment, this is a volatile zone where miscalculation could lead to a wider conflict in which Russia responds to Turkey with tactical nuclear weapons.

In all three of these cases – the Caliphate, Greece, Armenia – Turkey is testing the limits and nature of the regional order that brought about the creation of Kemalist Turkey in the 1920s. Turkey was at war with both Greece and Armenia less than a century ago. The fact that Ataturk won both those conflicts (and then abolished the Caliphate) has somehow, incredibly, been turned into some sort of shameful loss to be avenged by the unholy alliance of AKP Islamist extremists and MHP far-right nationalists in power in Ankara today. These dangerous fantasies involving Islam and infidels may play well among the Qatari-funded Turkish strongman’s core demographic in Anatolia and the Arab world, but could also backfire spectacularly, damaging international peace and stability in a region already soaked with blood.[21]

[2] MEMRI Daily Brief No. 175, Dear Mr. President: You Are Unable To Devastate The Turkish Economy, As You Warned – Because Your Bogus Ally Qatar Will Save Turkey Yet Again From Your Sanctions, January 15, 2019.

[5] MEMRI TV Clip No. 8179, Palestinian Activist Naser Al-Hadmi: The Re-Conversation Of Hagia Sofia Into A Mosque Will Lead The Way To The Liberation Of Mosques In Spain, Elsewhere In Europe, July 25, 2020.

[15] MEMRI TV Clip No. 8166, Turkish Journalist Hamza Tekin On Hagia Sophia Being Turned Into A Mosque: Turkey Can Do As It Pleases; We Are Breaking The Spiritual Shackles That Have Been Binding Us, July 21, 2020.

[20] MEMRI Special Dispatch No. 8875, Russian Military Expert Pavel Felgenhauer: Russia Will Defend Armenia From The Turks; If Necessary, Russia Will Save Armenia With A Nuclear Strike, August 3, 2020.

[21] MEMRI Special Dispatch No. 8864, Kommersant Columnist Yusin: Erdogan Is Pouring Kerosene On The Territorial Dispute Between Armenia And Azerbaijan, July 27, 2020.