Ukraine admits it was behind three explosions in Crimea. Here’s what we know

(CNN)Ukraine was behind three explosions rocked Russian military facilities in the annexed province of Crimea this past week, including an explosion at a Russian air base on the peninsula’s west coast that wrecked several airplanes, according to a Ukrainian government report circulated internally and shared with CNN by a ​Ukrainian official. ​

The official requested anonymity because they were not authorized to share the information with the media.
The report describes the Saki airbase, which was rocked by explosions last Tuesday, as a hard but one time loss for Russian military infrastructure in the peninsula, with subsequent attacks as proof of Ukraine’s systematic military capability in targeting Crimea.
The August 9 incident at Saki airbase, which destroyed at least seven military aircraft, severely damaged the base and killed at least one person​.
Russia claimed it was a result of an accident and Ukrainian officials have so far declined to confirm on the record that they were responsible. What caused the explosions remains unclear.
In a speech following the incident, Ukrainian President Volodymyr Zelensky said the war “began with Crimea and must end with Crimea — its liberation.”​
Another set of explosions were reported in Crimea this week, on August 16, this time at an ammunition depot in Maiske and at an airfield in Gvardeyskoe.
Russian officials said the incident in Maiske had been the result of sabotage​, but they did not specify the kind of sabotage, or whom they believed was responsible.

What do we know about other recent incidents?

On Tuesday, a fire and smoke plume were seen rising from an electrical substation 12 miles away from Maiske’s ammunition depot, according to social media footage. The cause of the fire, and smoke, at the substation remains unclear.
The incidents both took place around the Dzhankoi area, described by the British Ministry of Defence as “a key road and rail junction that plays an important role in supplying Russia’s operations in southern Ukraine.” 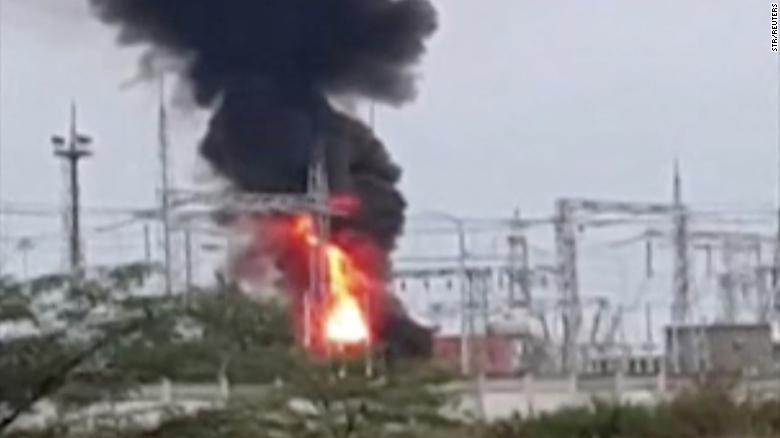 Smoke rises from an electric substation in Crimea on Tuesday.
The attacks come at a time when nascent resistance movement in Russian occupied areas appears to have been carrying out acts of sabotage.
Over the weekend, Ukrainian officials said that a railway bridge near the southeastern Ukrainian city of Melitopol, used by Russians to transport military equipment and weapons from occupied Crimea, was blown up by Ukrainian partisans. Melitopol has for months been a center of underground resistance to Russian occupation.
As analysts speculate that there is a campaign to degrade Russia’s military capability in Crimea, Zelensky warned Ukrainians living in occupied areas on Tuesday to stay clear of Russian forces’ military facilities.

What do the blasts mean for Putin’s ambitions?

The explosions at Saki airbase jolted sunbathers lounging in beach-side cabanas last week, and marked the start of a series of mysterious incidents on the Ukrainian peninsula that threatens the jewel of President Vladimir Putin’s revanchist ambitions.
Western officials and analysts have since offered competing explanations about the cause.
In any event, the Cavell Group said, the “Saki attack was audacious and highly effective in both damaging Russian reinforcements and striking a significant psychological blow to morale amongst the Russian military and civilians.” 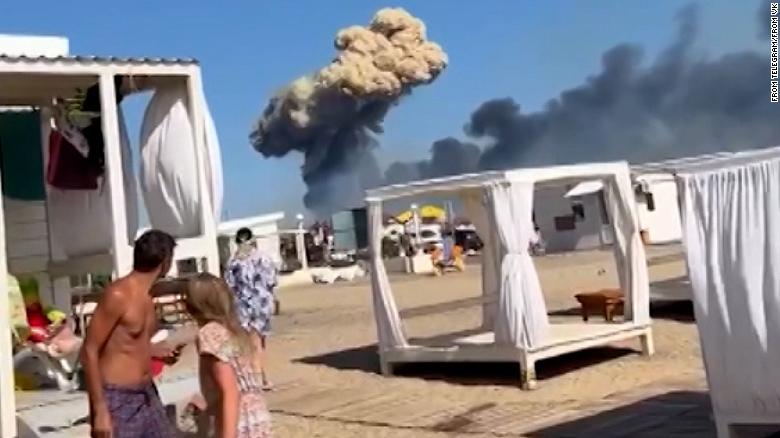 A mushroom cloud of smoke can be seen in the distance, scaring beachgoers in Crimea last week.
Whatever caused the explosions, they could have significant implications for the overall conflict, especially if the attack were to have been carried out with any new long-range weapon system that Ukraine has developed.
The UK Ministry of Defence says that the loss of combat jets represents a minor proportion of the overall fleet of aircraft Russia has available to support the war.
But it noted that Saki is the main base for supporting the Russian navy in the Black Sea. “The fleet’s naval aviation capability is now significantly degraded. The incident will likely prompt the Russian military to revise its threat perception,” it said.
It may also cause a re-evaluation of the threat to Crimea which “has probably been seen as a secure rear-area,” the ministry said.

Why is Crimea so important to Putin?

Crimea is home to Russia’s Black Sea Fleet, which is based at Sevastopol. The peninsula has acted as a launching pad for the February invasion, with Russian troops pouring into Ukraine’s south from the annexed region.
Control of Crimea assures Russia continuing access to the Sevastopol naval base, which it previously operated under a leasing deal with Ukraine that was scrapped after Moscow’s 2014 annexation of Crimea. Surrounded by the Black Sea and the Sea of Azov, ships and submarines based in Crimea are just north of Turkey and can reach the Mediterranean to influence the Middle East and the Balkans.
Crimea was forcibly seized by Russia in 2014 — soon after Ukrainian protesters helped topple pro-Russian President Viktor Yanukovych — when thousands of Russian special-operations troops wearing unmarked uniforms deployed around the peninsula in early March that year.
Two weeks later, Russia completed its annexation of Crimea in a referendum, slammed by Ukraine and most of the world as illegitimate, and at the time considered the biggest land-grab on Europe since World War II.

Since annexation, human-rights observers have described Crimea’s descent into a police state, with local authorities and Russian security services persecuting and arresting those perceived to be loyal to Ukraine, including members of the Crimean Tatar community. A 2020 US State Deparment report described a pattern of “unlawful or arbitrary killings, including extrajudicial killings by Russia or Russia-led “authorities”; forced disappearances by Russia or Russia-led “authorities”; torture and cruel, inhuman, or degrading treatment or punishment” in Crimea.

Even before annexation, nationalist Russian politicians often made claims to the region — with its rich farmland and its access to the Black Sea — part of their populist rhetoric, even though Russia was just one of a number of powers to have dominated Crimea over the centuries. One particular nationalist grievance was the Soviet leadership’s decision to transfer the administration of Crimea to Ukraine in 1954, when both Russia and Ukraine were part of the Soviet Union.
Putin also capitalized on those sentiments.
“In our hearts, we know Crimea has always been an inalienable part of Russia,” Putin told Russian lawmakers as he announced the annexation in 2014.
Crimea has long been a popular spot for Russian vacationers and for the Soviet elite. In 1991, the Soviet Union’s last leader, Mikhail Gorbachev, was vacationing in the region when hardliners launched a coup against him.
The full-scale invasion of Ukraine by Russia has affected tourism in the region. Sergei Aksyonov, the head of the Russian-controlled Crimean administration, acknowledged last month that a 40% decline in the tourism industry was expected over the summer. The Russian Tourism Association made a similar prediction in June.
Despite Moscow’s claims, domestic politics may have played a part in Putin’s decision to annex the region. Despite an economic crisis in Russia, nationalistic rhetoric and Crimea’s invasion saw Putin’s approval ratings climb in 2014

What’s happened in Crimea after the blasts?

The Russian road state agency on Tuesday reported a new traffic record across a Crimean bridge just days after the explosions at Saki airbase.
“During the day on August 15, 38,297 cars drove across the bridge in both directions,” the statement read.
Local officials have downplayed the size of the lines saying they were the result of stricter controls on the bridge for security reasons and not because of an increase in outward traffic.
“From the point of view that they are fleeing Crimea, this is a complete lie, there is no doubt about it,” Aksyonov, the head of the Russian-controlled Crimean administration, told Russian state TV on Tuesday.
On Tuesday, in reference to the miles-long tailbacks of civilian vehicles attempted to leave Crimea for Russia, Zelensky said: “The queue these days to leave Crimea for Russia via the bridge proves that the absolute majority of citizens of the terrorist state already understand or at least feel that Crimea is not a place for them.”