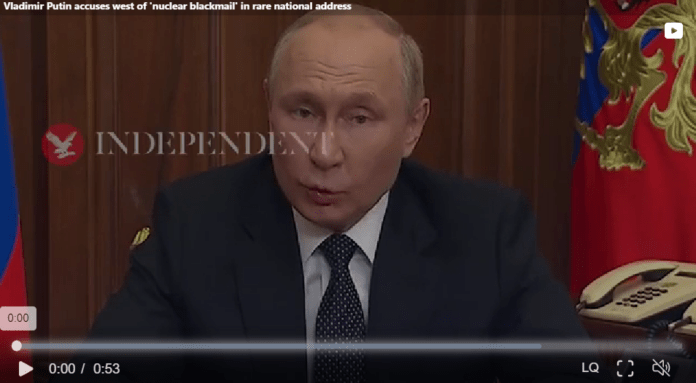 The world has been reminded of a global war threat after Vladimir Putin claimed he isn’t ‘bluffing’ and accused the West of engaging in ‘nuclear blackmail.’

In a rare address to his nation on September 21st, Putin announced a “partial mobilisation” of around 300,000 troops to the war in Ukraine. He added: “If there is a threat to the territorial integrity of our country, and for protecting our people, we will certainly use all the means available to us – and I’m not bluffing.”

With modern technology and nuclear weapons, some wonder what a new World War would look like.

The audio-visual scenario is called “Plan A” and it shows how devastating a nuclear war would be.

In the four-minute-long video, scientists play out a scenario where Russia is attempting to fight off members of NATO. At first, the war is between Western European countries and Russia but once all major cities have been bombed, the war turns between the US and Russia.

The simulation assumes that Russia would target major US cities and there are no bomb threat warnings in those major cities. In reality, civilians would know in advance if a nuclear weapon would be potentially detonated, giving some enough time to seek shelter.

Between Russia and the US alone, scientists concluded a nuclear war would kill 3.1 million people within 45 minutes.

In total, across Europe, Asia, and the US the simulation says a total of 90 million people would be killed within the first few hours of conflict and that number does not include deaths from nuclear fallout or other long-term effects.

But before you freak out and assume this is the world’s fate, the chance of a nuclear global war is fairly unlikely. Even a small-scale nuclear war between two smaller countries would have catastrophic consequences for the rest of the planet. Additionally, there are legally binding contracts between countries, including Russia, that prevent a nuclear war from occurring.

At the end of the day, a war fought with nuclear weapons is not one that can be won. However if every nuclear weapon was detonated at the same time, this is what it’d look like.