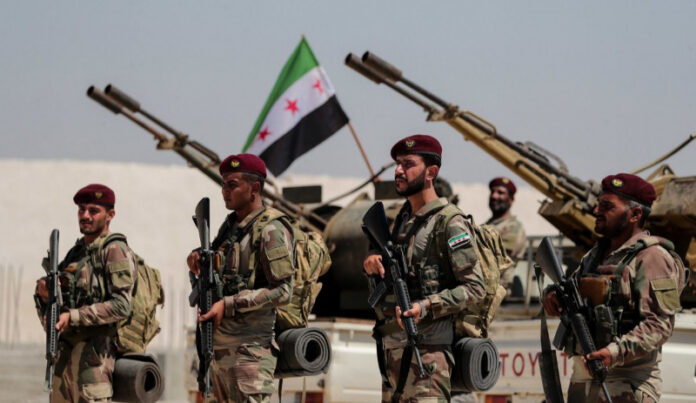 After being stationed in Libya, another front was opened for the Syrian mercenaries when in September 2020, Azerbaijan launched air and ground attacks across Nagorno-Karabakh.

Syrian mercenaries, used by the Turkish military in Northeast Syria against Kurdish-led Syrian Democratic Forces (SDF), have been recruited in thousands by Turkey to serve as foot soldiers in the conflicts in Libya and Caucasus, the National Interest reported.

John Lechner and S. Asher, co-authors of the special report titled “Inside the Bloody Business of Turkey’s Syrian Mercenaries,” point out that the process of dispatching large numbers of mercenaries to Libya sped up after Turkey signed a memorandum of understanding with the Libyan Government of National Accord (GNA) on maritime boundaries in the Mediterranean, which marked an important move in terms of Turkey’s geopolitical interests and led to protests from Egypt, Cyprus and Greece.

The demand for the mercenaries was greater than even expected by the Syrian recruiters of groups like al-Hamzat.

“We had to send as many fighters as we could recruit. The Turks were asking for 2,000 men; our battalion is only 500 strong. So, we started sending kids with zero military experience,” Abo Saied, a recruiter for one of the Turkish-backed militias is cited saying.

Second front in the Caucasus

Another front was opened for the Syrian mercenaries when in September 2020, Azerbaijan launched air and ground attacks across Nagorno-Karabakh, reigniting conflict between Azerbaijani, Armenian, and local Karabakh forces.

Saied was this time recruiting for the war in the Caucasus.

Now, however, according to him, the Turks “paid more attention, and they insisted we send experienced fighters.”

“The vetting process improved. As recruiters understood it, the Turks viewed the Azeris as ‘brothers,’ and their support for Azerbaijan was ideological, unlike their support for the GNA in Libya, which was contractual and based on geopolitical interests,” say the authors.

They make a particular note on the involvement of Turkish private military company SADAT:

“Recruiters we spoke to maintain that their primary contact was with Turkish intelligence, while logistics were outsourced to ‘unknown companies.’ It is likely that those companies are affiliated with SADAT, the Turkish private military company founded by Adnan Tanrıverdi, a former brigadier general and close confidant of Turkish president Recep Tayyip Erdogan.”

A 2020 report by the U.S. Department of Defense, cited by the authors, state that “Sadat maintains supervision and payment of the estimated 5,000 pro-GNA Syrian fighters in Libya, according to USAFRICOM.”

Turkish citizenship promised in the event of a mercenary’s death

“Many Syrians who signed up to fight in Libya and Azerbaijan were promised, in the event of their death, that their family members would receive a path to Turkish citizenship,” the authors add.

It is now likely that the Syrian mercenaries stationed near Libyan capital Tripoli are pulled into a recent conflict between rival factions that began in late August.

“Mercenaries located in Janzur, west Tripoli, may find themselves blocking pro-Bashagha militias from the west. Mahmoud ben Rajab, a Libyan commander and Dbeibah ally with close connections to Turkey, is one of the few who could deploy Syrians. Rajab doesn’t have many armed Libyans under his command, and his ‘existing political image could potentially withstand the use of Syrians,’ according to Harchaoui.”