Lord of the Masses: How Russia’s Fringe Elements Went Mainstream 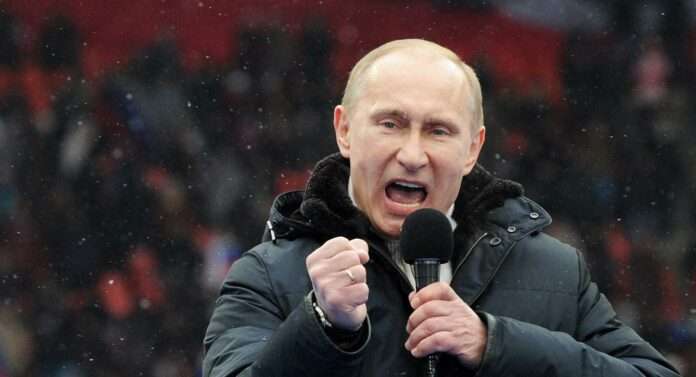 Putin’s immersion in the “masses” is becoming dangerous. His vocabulary and behavior are growing increasingly marginal, and the communication style of other high-ranking officials will in turn inevitably become marginalized too.

Russian President Vladimir Putin has one message that he likes to convey in his public speeches: that he is very much a man of the people, with the blood of simple Russian folk running through his veins. His idea of the people, however, has changed more than once during his lengthy reign, and is changing once again right now.

The people he chooses to meet in public and his own behavior show that for the president, the Russian people are currently embodied by somewhat marginal figures elevated by the war, such as the Donbas separatists, mercenaries, and a certain kind of self-proclaimed war correspondents. All the Russian authorities can do is adapt to the president’s version of reality and adopt his marginal style.

Putin loves to remind people of his humble origins. At the recent Valdai forum, he talked about his father (“a tradesman who went to technical college”) and his mother (“she didn’t even finish high school”). The president is, therefore, very familiar with “what makes ordinary people tick,” he concluded.

Putin constantly underlines his proximity to the common people through the vocabulary he employs. At the same Valdai forum, he used slang and even parts of speech suggestive of expletives.

Officially, he was speaking to the international relations experts assembled at the forum, but judging by his speech and manner of delivery, he was in fact setting out his message to the masses: the parts of society that symbolize the fabled “Putin majority” for him. Right now, that’s the Donbas separatists, some so-called war correspondents, private military contractors and Chechen battalions fighting in Ukraine, and soldiers, including those who were recently mobilized. Putin likes people who have been in the trenches and know what gunpowder smells like—or who at least have been close to the action.

The president’s new idea of ordinary folk stems directly from Russia’s invasion of Ukraine. Putin has waxed lyrical over the Donbas separatists who were “fighting for their homeland on the front line,” and awarded the notorious separatist commanders Arsen “Motorola” Pavlov and Vladimir “Vokha” Zhoga with posthumous Orders of Courage. The former was a classic example of the masses Putin is currently courting: born in Russia’s northwest where he was reportedly wanted by the police, Motorola went to fight in another country for fame and fortune on the pretext of defending the concept of the “Russian world.”

Another group Putin is fond of are self-proclaimed journalists who style themselves as war correspondents, are not afraid to mince their words, and “report” from the front line wearing bulletproof vests. These people also sometimes have a murky past, or even criminal convictions. Their cooperation with the Kremlin and its media managers dates back to before the war, so it’s not difficult now to arrange their presence at events for them to describe the “true horrors” they have seen.

The president is known to have met with these “war correspondents” on at least two occasions: ahead of the announcement of the mobilization in September, and in June. Securing an audience with Putin since the start of the COVID pandemic has been no mean feat, even for very influential representatives of Russian politics and business, yet Russia’s leader apparently can find the time for this motley crew.

Their role is obvious. A propagandist in uniform, even an audacious daredevil type, is not a true soldier, and will not, therefore, harass the president with complaints about the real hardships of war, never mind criticize the president’s decision to start that war. The “war correspondents” will slam the generals, talk about their mistakes, and suggest taking tougher action: broadening the mobilization, and stepping up the bombing campaign against Ukrainian cities. This point of view is close to Putin’s heart: it is not he who is at fault, but the generals, and the war is indeed necessary, it’s just that a few errors must be rectified.

One of these “war correspondents,” Vladlen Tatarsky, recently said: “Everyone we need to rob, we will. Everyone we need to kill, we will.” He should know: he himself has a conviction for bank robbery. Most telling of all was the setting for his comments: a meeting in the Kremlin on September 30 attended by high-profile members of the elite. Now Tatarsky personifies that elite.

Another figure who has taken root in the president’s inner circle is Yevgeny Prigozhin, founder of the infamous private military company Wagner, who also hails from the masses and has a checkered past. It’s difficult to say whether or not he personally has access to Putin, but what is certain is that he can get away with criticizing the Defense Ministry without any consequences.

In recent months, Prigozhin has publicly admitted after years of rumors that he did indeed found Wagner; he makes jokes and uses curse words when commenting for media publications; and he has been openly visiting Russia’s prisons, recruiting convicts for the armed forces.

Likewise, the notorious Chechen leader Ramzan Kadyrov, long known for his controversial statements and actions, has also taken it upon himself to represent the “common people” via his social media channels, including by posting smutty humorous videos.

Such is the new surrogate for the Russian people in Putin’s eyes. The Russian leader has already changed his opinion several times before on what the “majority” looks like: the people he has always considered his audience. And every time, officials in the presidential administration built a new backdrop to correspond to the president’s changing image of the “majority.”

At the beginning of the 2010s, the “people” consisted of the All-Russian People’s Front: an organization made up of state employees and pro-regime activists. This was the Putin majority constructed for the president by Vyacheslav Volodin, who was then head of the Kremlin’s domestic policy bloc.

A few years later, the president’s understanding of his nuclear electorate changed slightly. The aging leader took a shine to the young careerists, such as participants in state competitions for professionals. Events with these “ordinary people” were accordingly set up by Volodin’s successor, Sergei Kiriyenko.

Kiriyenko has proven to be very flexible. He might be more at home organizing competitions for careerists, but he is also capable of building more rugged backdrops, throwing on some fatigues, and becoming just as militant as Kadyrov, Prigozhin, and the “war correspondents.” He demonstrated this during a forum at the end of October when he explained that Russia would win the war in every sense—including the “psychological information war”—but for that to happen, the war must become truly a “people’s war”: every Russian must “feel their involvement.”

The kind of people being invited to the Kremlin these days have long since felt involved, and are actively demonstrating that: both to Putin and to everyone else. And in all likelihood, the president truly believes that the population of these Potemkin villages constructed by those around him are “the people.”

Now the head of state has started borrowing certain traits from those whom he considers to represent the people. In his public speeches, he increasingly imitates the cocky manner of Prigozhin, for example, combining it with cliches about the decaying West. The president’s immersion in the “masses” is becoming dangerous.

His vocabulary and behavior are growing marginalized, and the communication style of other high-ranking officials will inevitably become marginalized too. After all, they had no qualms about repeating Putin’s less-than-intelligible word “denazification” or discussing the fight against fascism. They will have no problem adopting his vulgar tone.

Carnegie does not take institutional positions on public policy issues; the views represented herein are those of the author(s) and do not necessarily reflect the views of Carnegie, its staff, or its trustees.