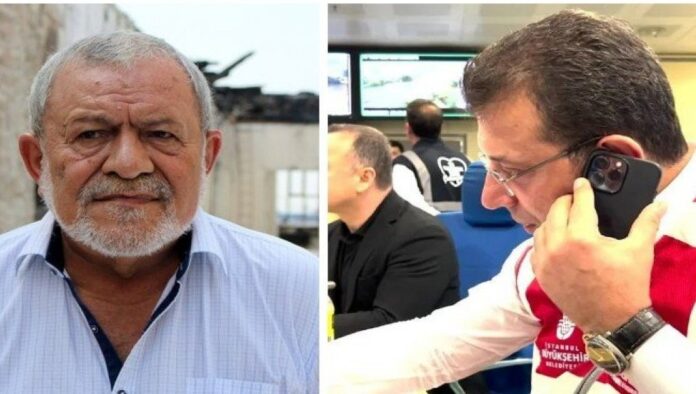 İstanbul Mayor Ekrem İmamoğlu has come under fire for lambasting Konstantin Yuvanidis, president of the Balıklı Greek Hospital Foundation, due to his remarks in an interview regarding a fire that broke out at the historic Greek hospital earlier this month.

No one was injured during the fire on Aug. 4 at the Balıklı Greek Hospital in İstanbul that engulfed the roof of the building, according to the state-run Anadolu news agency, which added that the cause of the fire was still unknown. Eighty patients, mostly elderly, were moved to a nearby health care facility after the fire broke out, Anadolu also said, citing officials from the İstanbul Governor’s Office.

The ANKA news agency on Tuesday said in a report that İmamoğlu had called Yuvanidis, criticizing him due to his remarks in a recent interview with the pro-government Sabah daily in which he thanked President Recep Tayyip Erdoğan and his government for their support following the fire while criticizing İmamoğlu for not showing proper concern.

In his call to Yuvanidis, in a video released by ANKA, İmamoğlu is heard telling him he was disturbed by his remarks in the interview and that Yuvanidis had failed to mention that he sent a team of seven people to help and called him later, too.

Describing the interview as “unfortunate,” İmamoğlu suggested that Yuvanidis demand a correction in Sabah if he thought the newspaper had distorted his words.

Following the mayor’s criticism, journalists and social media users criticized him for coming down on the president of a minority foundation and acting like President Erdoğan, who is frequently slammed by the opposition and government dissidents for showing dictatorial tendencies.

Ergun Babahan, editor-in-chief of +GerçekNews, on Thursday described İmamoğlu as “junior Tayyip” in a tweet regarding the rebuke.

Journalist Tuğba Tekerek also said, “He is powerful enough to [come down on] the president of a minority foundation. Who knows what he would do if he could be more powerful!”

“Yuvanidis … allowed himself to be used as a political tool. He was unfair to İmamoğlu. But İmamoğlu … is creating a new Erdoğan in himself, which is the last thing we need,” a Twitter user said.

İmamoğlu secured a victory for the Turkish opposition in 2019 as the main opposition Republican People’s Party’s (CHP) mayoral candidate for İstanbul, ending 25 years of dominance by Erdoğan’s ruling Justice and Development Party (AKP) and its political predecessors in Turkey’s largest city.