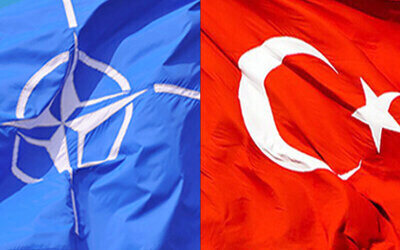 World Geostrategic Insights: Turkey’s President Recep Tayyip Erdoğan stated on Sept. 2 that “A NATO without Turkey is unthinkable. Greece has no value in NATO. If there is Turkey, NATO is strong, if there is no Turkey, NATO is weak.” Is he correct?

Daniel Pipes: No, he is wrong, and for two main reasons. First, while Turkey does bring important assets to the NATO alliance – its large armed forces, formidable military industry, and critical geographic location – those assets are all vitiated by Turkish actions. The forces attack civilians in Syria, the armaments go to Ethiopia, and the location leads to outrageous land and sea claims. Secondly, Greece is a loyal member of NATO, it has built up its military strength, and it works productively with two non-NATO partners, Cyprus and Israel. The reliability of Greece makes it far more valuable to NATO than Turkey.

WGI: Just a day later, on Sept. 3, Erdoğan accused Athens of illegally occupying islands in the Aegean sea and threatened to seize Greek islands: “Your occupying the islands does not bind us. When the time, the hour, comes, we will do what is necessary.” He also reminded the Greeks “not to forget Izmir,” a reference to a Turkish victory over Greek forces exactly a century earlier. What do you make of these statements?

DP: I see them as an extremely dangerous distraction at a moment when NATO is focused on helping Ukraine against Putin’s aggression. Any hostile action by Erdoğan versus Greece would not only be a catastrophe in itself but would severely damage the united front against the Russian invasion. NATO needs to warn Erdoğan loud and clear that it will stand with Greece against Turkey just as it stands with Ukraine against Russia. Also, I wonder if Putin encouraged Erdoğan to threaten Greece; if so, what might the threat or quid pro quo be? 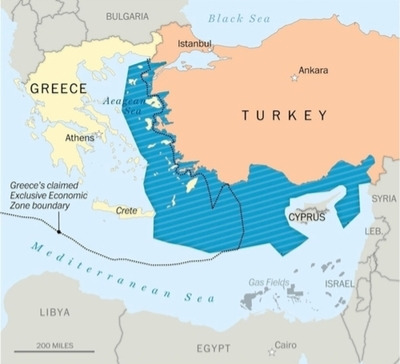 The outrageous “Blue Homeland” plan has attracted a following in Turkey.

DP: Note the jarring contrast of threats against Greece and the quickly warming relations with those Middle Eastern states. Given that Turkey is effectively a dictatorship, the explanation probably lies less in a sophisticated strategy and more in Erdoğan’s biases and inconsistencies. As a bully who often acts illogically, perhaps he sees the Middle Eastern states as a threat to his power while dismissing Greece as insignificant. Not only is Turkey’s population eight times larger than that of Greece but Erdoğan witnessed at close hand the economic decline of Greece following the 2008 global recession. So, he mobilizes public opinion against a perceived weaker opponent and away from what he sees as more threatening ones.

WGI: Do these foreign policy changes signify a tactical or strategic shift?

DP: Nearly everything Erdoğan does is tactical, whether working with the Kurds, promoting economic growth, buying arms from Russia, or turning on the charm internationally. He has only two consistent goals: gathering personal power and forwarding an Islamist agenda.

WGI: Turkey has increasingly become a problem for Western allies by not meeting the alliance’s requirement of democratic governance and working closely with its opponents (Russia, China). Would NATO be better off without Turkey?

Turkey is a liability whenever NATO confronts ISIS, Iran, Russia, or China.

DP: Absolutely. Turkey is a liability whenever NATO confronts ISIS, Iran, Russia, or China. Ankara’s block to Sweden and Finland joining the alliance offers a timely example of it impeding NATO.

WGI: Should the alliance explore ways to expel or marginalize Turkey?

DP: Yes, though I very much doubt this is happening due to a mentality that sees Erdoğan as an aberration and expects a return to the good-old Turkey of 1952-2002. But I have news for NATO; with only one slight exception, all the other Turkish political parties view NATO with more hostility than Erdoğan. By the way, I witnessed NATO’s weakness toward Turkey first hand in 2017, when my organization, the Middle East Forum, hosted a NATO event and 11 country delegations ostentatiously stood by Ankara rather than by NATO’s founding principle “to safeguard the freedom” of its peoples.

WGI: As an easier solution than expelling Turkey, you have suggested the creation of a NATO 2.0 without Turkey. What do you have in mind?

DP: It is theoretically possible to expel Turkey from NATO but difficult and controversial. I propose starting a new organization that includes all the other 29 members but not Turkey. Then, shift all of NATO’s assets to the new organization. This time, clear rules for membership and expulsion need to be included. While we’re being creative, how about deleting the geographic reference and call it something like the Global Alliance of Democracies, GLAD? That then opens to the door to Israel, India, Australia, Japan, South Korea, and others joining. It can become a proto-United Nations of democracies.

WGI: Would Turkey not cause even more problems outside of NATO, aligning more closely with Russia and China?

DP: I think not. First, Turkey needs NATO more than NATO needs Turkey. Turkey joined NATO in 1952 out of fear of Russia. No matter how much Putin and Erdoğan pal around now, the Turks know who’s the boss and who won in the two centuries of warfare. Second, Ankara already aligns closely with Moscow and Beijing in the diplomatic, financial, trade, and military arenas; NATO membership has not held it back.