KYIV/BERLIN, Jan 19 (Reuters) – Western allies pledged billions of dollars in new weapons for Ukraine on Thursday, but the question of whether they would also send German-made tanks remained unanswered, with Berlin yet to signal whether it would lift a veto.

Fearing winter will give Russian forces time to regroup and unleash a major attack, Ukraine is pushing for the Leopard battle tanks, which are held by an array of NATO nations but whose transfer to Ukraine requires Germany’s approval.

A German government source said Berlin would lift its objections if Washington sends its own Abrams tanks.

German Chancellor Olaf Scholz, a Social Democrat, has been reluctant to send weapons that could be seen as provoking Moscow. Many of Berlin’s Western allies say that concern is misplaced, with Russia already fully committed to war.

U.S. Defense Secretary Lloyd Austin and the new German Defence Minister Boris Pistorius met in Berlin, but there was no word on any progress ahead of a meeting of dozens of allies on Friday at Ramstein, Washington’s main European air base.

Poland’s Prime Minister Mateusz Morawiecki said later on Thursday of the possibility of German approval, “I am moderately sceptical, moderately pessimistic because the Germans are defending themselves against this like a devil protects himself against holy water.”

Ukrainian President Volodymyr Zelenskiy made thinly disguised criticism of Germany for its stance.

“‘I am powerful in Europe, I will help if someone else outside of Europe will also help.’ It seems to me that this is not a very correct strategy,” he said.

The Ramstein meeting is billed as a chance for the West to give Ukraine what it needs to defeat Russia in 2023 and a group of 11 NATO countries have already announced armoured vehicles and air defences.

But Kyiv says it needs heavy tanks to fend off Russian assaults and recapture occupied land.

“We have no time, the world does not have this time,” Andriy Yermak, head of the Ukrainian presidential administration, wrote on Telegram on Thursday.

“We are paying for the slowness with the lives of our Ukrainian people. It shouldn’t be like that.”

Dutch Defence Minister Kajsa Ollongren said she was confident a solution would be found for supplying modern battle tanks to Ukraine, but that the Netherlands, which leases Leopard 2 tanks from Germany, would need a green light from Berlin before deciding whether to contribute.

A German government source said Berlin had yet to receive a request from any country for permission to re-export the tanks. The Leopard 2 tanks – workhorse of militaries across Europe and which Germany made in the thousands during the Cold War – are the only suitable option available in big enough numbers according to some Western allies. 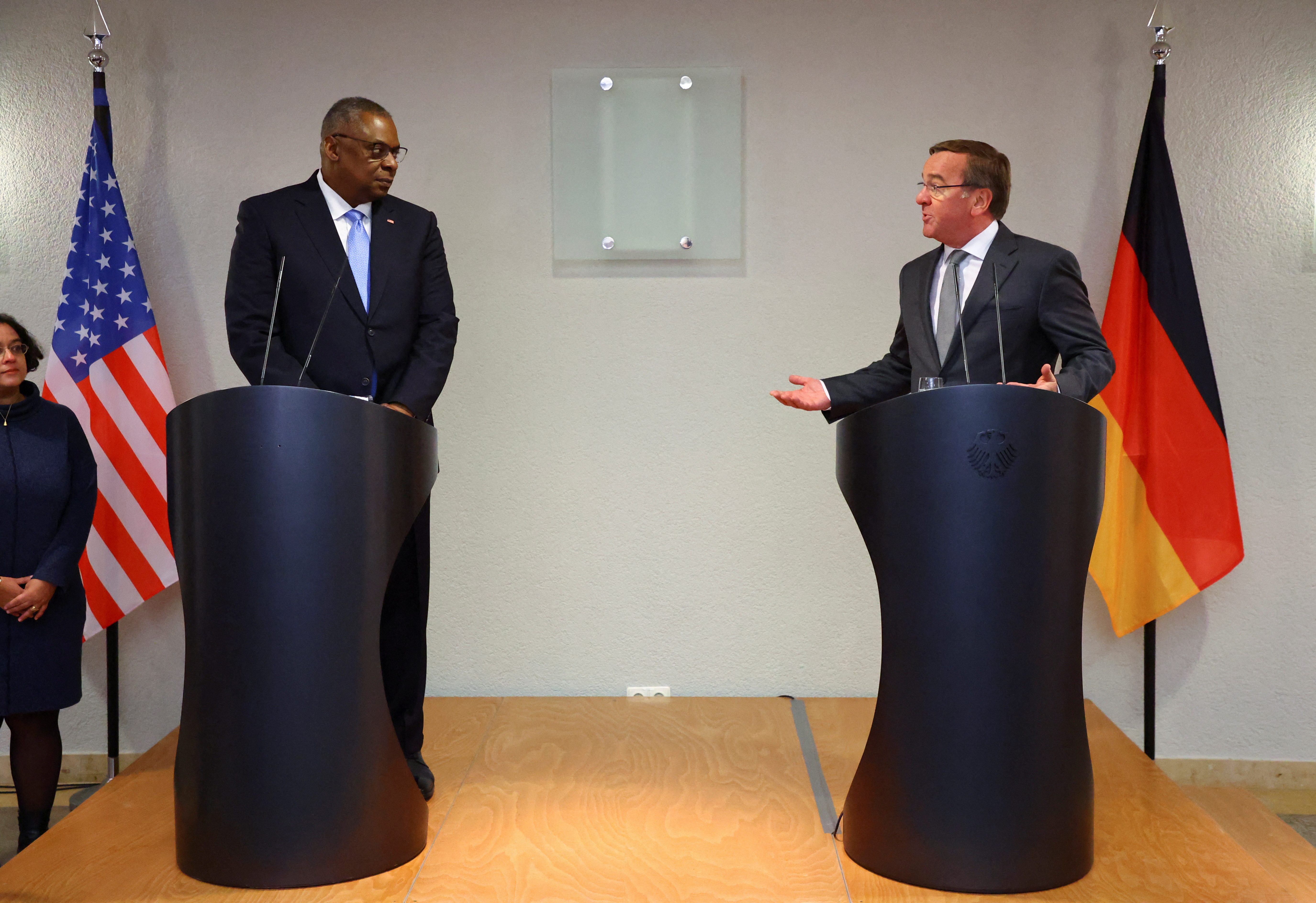 U.S. officials say they have no plans yet to send the Abrams, which is seen as using too much fuel for Kyiv’s strained logistics system to supply at the front.

Pistorius and Austin both spoke about the importance of supporting Ukraine ahead of their meeting, but neither addressed the tank issue directly.

At a ceremony after being sworn in as minister, Pistorius said: “These are not normal times, we have a war raging in Europe. Russia is waging a brutal war of annihilation on a sovereign country, on Ukraine.”

Austin described Germany as one of Washington’s closest allies and thanked it for its support for Ukraine so far.

Poland and Finland have already said they would send Leopards if Germany lifts its veto. In a sign of mounting frustration, Poland suggested it might do so even if Germany tries to block it.

Russia has responded to the prospect of more weapons for Kyiv with threats of escalation. Dmitry Medvedev, an ally of President Vladimir Putin who stood in as president from 2008-2012 when Putin took a hiatus to act as prime minister, made one of Moscow’s clearest threats to use nuclear weapons if it loses in Ukraine.

“The defeat of a nuclear power in a conventional war may trigger a nuclear war,” Medvedev said. “Nuclear powers have never lost major conflicts on which their fate depends.”

There have been signs of friction within Germany’s governing coalition. Scholz’s deputy Robert Habeck, from his coalition partners The Greens, said just last week that Germany would not stand in the way of other countries sending Leopards to Ukraine.

Tying the Leopards to U.S. Abrams tanks could shift the onus onto Washington. Colin Kahl, the Pentagon’s top policy adviser, said on Wednesday Abrams tanks were not likely to be included in Washington’s next massive $2 billion military aid package, to be headlined by Stryker and Bradley armoured vehicles.

“The Abrams tank is a very complicated piece of equipment. It’s expensive. It’s hard to train on. It has a jet engine.”

Ukraine and Russia have both relied primarily on Soviet-era T-72 tanks, which have been destroyed in their hundreds in 11 months of fighting. Kyiv says better armed and protected Western tanks would give its troops the mobile firepower to drive out Russian troops in decisive battles.

After big Ukrainian gains in the second half of 2022, the frontlines have largely been frozen in place over the past two months, with neither side making big gains despite heavy casualties in intense trench warfare.

Yevgeny Prigozhin, leader of the private Russian mercenary force Wagner that has taken a leading role in fighting near the eastern city of Bakhmut, claimed on Thursday his forces had seized the village of Klishchiivka on Bakhmut’s outskirts. Kyiv has previously denied that the settlement has fallen.

Reuters could not confirm the situation there.