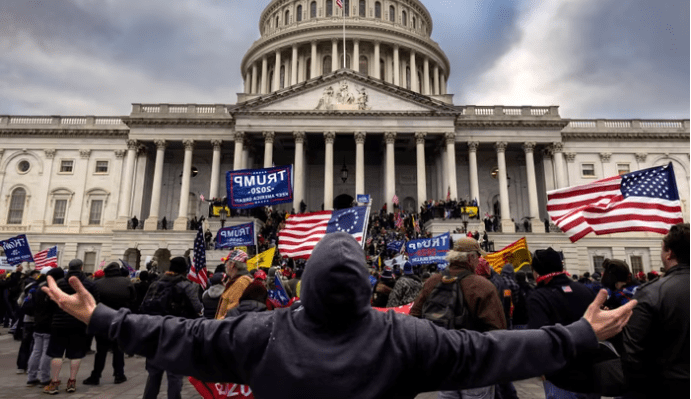 President Joe Biden has been getting a lot of static for referring to the ideology of Donald Trump and his followers as “semi-fascism.” It isn’t surprising that right-wing pundits, such as the Fox News contributor Mollie Hemingway, are practically having to take out loans to buy extra strings of pearls to clutch. But even John Avlon at CNN and Matt Lewis at The Daily Beast are trying to warn Biden off from insulting millions of voters.

It’s risky politics for the president to use words like semi-fascism, much as it was a needless fumble back in 2016 for Hillary Clinton to call people “deplorables.” For the rest of us, even to consider the word fascism feels like failure. It is a Rubicon we fear to cross, because it makes our fellow Americans into our civic enemies and implies that there is no road back for them, or for us.

We cannot, however, let our understandable fear of words such as fascism scare us out of talking about the reality staring us in the face. The GOP itself might not meet the full definition of a “fascist” party—not yet, anyway—but it’s not a normal party, and its base is not an ordinary political movement. It is, instead, a melding of the remnants of a once-great party with an authoritarian, violent, seditionist personality cult bent on capturing and exercising power solely to benefit its own members and punish its imagined enemies among other Americans.

Is that fascism? For most people, it’s close enough. A would-be strongman and a party of followers enveloped in racism, seized with nostalgia for an imagined glorious past, and drunk on mindless blood-and-soil nationalism all stinks of fascism. There’s a reason, however, that I still counsel against rushing toward the F-word: Things are poised to get worse, and we need to know what to watch for.

Fascism is more than a romance with a forceful right-wing leader. (And let’s remember: Trump is not a “strongman” in any way—he is one of the weakest and most cowardly men ever to serve as president.) A fascist takeover relies on a disciplined and organized mass party led by dedicated people who, once they gain the levers of government, will zero in on destroying the mechanisms—laws, courts, competing parties—that could dislodge them from power.

Violent, tiki-torch-wielding nincompoops are dangerous, but a rabble is not a disciplined party. Ivy League Republicans stumbling around and losing to Democrats in a 50–50 Senate are not the iron ladies and men of steel who can build a fascist state. Faux intellectuals such as Steve Bannon blathering about Leninism are not capable of inspiring the masses. And real fascist street fighters do not start blubbering and shedding tears when they’re arrested. (To paraphrase Jimmy Dugan, there’s no crying in fascism.)

This is why it’s a mistake to assume that every group of howling weirdos wearing “Trump 2024” capes and carrying bear spray is composed of  “fascists.” Some of these people are deluded, some are bored, and some are just idiots. If we build them into something more, we’re not only missing the chance to pull some of those people back into American democracy; we’re going to fail to spot the real fascists hiding among them. Glaring drivers jacked up on Fox News and talk radio flying “Fuck Joe Biden” flags on their cars aren’t fascists; they’re the raw material of fascism, the battering rams that actual fascists—cleverer and nimbler than the hapless overgrown adolescents who will end up in front of a judge—will use to knock down our institutions by goading them into violence.

This might seem like a distinction without a difference. And I suppose, like so many people, I am prone to “normalcy bias”—a kind of innate denial that life could ever change dramatically. For those of us who remember the Cold War, it is a special humiliation to think that we defeated the Soviet Union only to find Americans in Budapest cheering on the likes of Viktor Orbán.

But something has changed in American life. Trumpism, which has captured the base of the Republican Party, is authoritarian, antidemocratic, anti-constitutional, and anti-American. For now, Trump and the GOP activists are capable only of igniting scramble-brained jacqueries. But Trump’s most faithful followers are headed for fascism, and they will use the GOP as the vehicle to get there unless the rest of us remain true to a pro-democracy coalition.

It is also important not to be overly distracted by Trump himself. We are in a prefascist interlude, but Trump himself is too incompetent, too lazy and selfish, to lead an actual fascist movement. But avoiding the word won’t prevent it from happening. What should really scare us is realizing that smarter and tougher American fascist leaders are out there, waiting. Trump has paved the way for them by corroding the guardrails of the American system, normalizing the kinds of rhetoric and attacks on opponents used by actual fascists, and convincing ordinary American voters that mass violence is an alternative to the ballot box.

We can prove him wrong and stop this threat in its tracks. But time is growing short.