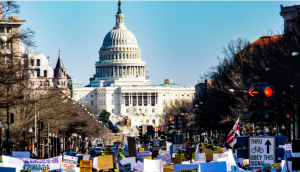 On April 1st and 2nd, the United States Coalition of Muslim Organizations (USCMO) descended on Congress for its fifth annual National Muslim Advocacy Day. USCMO is a national umbrella group for a veritable Who’s Who of Islamist organizationssuch as the Council on American-Islamic Relations (CAIR), the Muslim-American Society (MAS), American Muslims for Palestine (AMP), and the Muslim-Brotherhood think tank International Institute of Islamic Thought (IIIT). USCMO describes its mission as facilitating communication and coordination between all these groups, “to create and sustain an urgent, collective sense of direction.”

USCMO is led by Oussama Jammal, a longtime Islamist who raised money for terror financer Sami al-Arian and has close ties with the Islamist party of Turkish ruler Recep Erdogan, and with the government of Qatar and the Muslim Brotherhood — as do many of the other USCMO leaders. USCMO nevertheless presents itself as the spokesman for the entire American Muslim community (most members of which want nothing to do with the Brotherhood). And it is that message, more than any other, that USCMO wants to convey to our elected representatives: that Islamists speak for all Muslims in America.

During National Muslim Advocacy Day, hundreds of participants from USCMO member organizations across the country converge on Washington DC to visit Congressional offices, predominantly Democrats who are friendly to the new Islamist-Progressive alliance, and lobby for a targeted policy agenda. As its website puts it, the lobbying event “provides American Muslims with an invaluable opportunity to forge lasting relationships with members of Congress and policy makers. Participants will also demonstrate the ability of Muslim delegates to develop good will within Congress for domestic issues that reflect the interests and needs of their community.”

During Jammal’s speech at the beginning of USCMO’s training session yesterday, he stressed the “unity” displayed by the attendees, who came from organizations with very different (he claimed) ideologies and viewpoints. (Though not too different; no Ahmadiyya or Muslim-feminist groups were there.) “This is what USCMO is all about,” Jammal said. “We are about nothing other than our unity, our collective power… It is only when we are together that they will listen to us with respect, with full attention. But they have tried to keep us divided, to make us say ‘This is good, this is bad, this is ugly.’ And we are not going to allow this kind of division among our community.”

Here, Jammal encapsulates everything dangerous about USCMO’s mission. By demanding that all American Muslims present a united front, with Islamists at the head, USCMO and its members seek to create a permissive environment for Islamist extremism. That is why they don’t want people identifying the “bad” and “ugly” within the American Muslim community: so they can use mainstream Muslims as ideological human shields.

But USCMO cannot be underestimated: it has gotten very slick in its methods.

Earlier efforts by Islamists to lobby the American political system often focused on foreign-policy issues, particularly around Israel, and on weakening anti-terrorism laws such as the Anti-Terrorism and Effective Death Penalty Act of 1996 — understandable, given that key activist (and Palestinian Islamic Jihad official) Sami al-Arian turned out to be in violation of those laws! That focus made it easy to see that Islamists were trying to undermine American interests, rather than being sincere participants in our civic life.

Today, on the other hand, Muslim Advocacy Day is focused largely on domestic policy. To be sure, some issues on their agenda clearly affect the Muslim community in particular –such as the effort to repeal the Trump Administration’s“travel ban” and prevent such bans in the future. But other items, such as support for the American Dream and Promise Act and gun-control legislation, are conventionally Progressive — in keeping with the long Islamist campaign to co-opt the progressive movement. And despite the heavy emphasis that organizations like CAIR have placed on pro-BDS legislation on the state level, Israel and the Palestinians are not even mentioned.

Another item, described as “not a primary issue,” is “bank de-risking practices”: i.e. to prevent banks from blocking money transfers or closing the accounts of Islamist organizations they suspect of money laundering or terror financing. To be sure, the status quo has led to some harmful side-effects that should be addressed; but given the history of Islamist advocacy on counter-terrorism issues, lawmakers should look past all the warm friendly feelings their new “friends” are cultivating and pay very, very close attention to the details.

Note as well that despite its ostensible domestic focus, USCMO is ultimately and fundamentally anti-Israel. The virulently anti-Semitic organization AMP is one of the founding members; and in his speech, Oussama Jammal said, “Today and tomorrow is about domestic issues. But next week, it is the week of Palestine.” Noting that AMP was holding its own Palestine Advocacy Day on April 5th, Jammal called on everyone to participate in that event as well: “We have to stand up and we have to be strong, and we have to defend the rights of the Palestinian people.”

In short, USCMO’s focus on (comparatively) domestic issues is purely tactical. The very same people are involved in both sides of the equation, and lawmakers need to recognize that. The particulars of USCMO’s lobbying agenda seem innocuous if you are of a progressive bent, but that very innocuousness is meant to solidify its claim to represent all American Muslims, including those who adamantly disagree with Islamism and its activist networks. Don’t fall for it.

Dr. Oren Litwin is a Research Fellow at Islamist Watch, a project of the Middle East Forum.