The Eastern Mediterranean and the EU Parliamentary Election 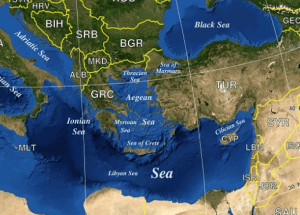 EXECUTIVE SUMMARY: The states of the Eastern Mediterranean should pay close attention to the upcoming European parliamentary election, as its outcome will influence geostrategic and economic developments in that region. Israel, Cyprus, and Greece will have a major role to play in strengthening Western relationships in the region for decades to come.

I recently returned to Thessaloniki after a week of lecturing at the University of Grenoble in France. The mood there was marked by widespread anxiety about the upcoming elections to the European parliament and the future of the EU. The alarming strengthening of Marine Le Pen, the ongoing hostile rallies of the gilets jaunes, the rise of xenophobia, and the more frequent expression of anti-Israelism as a new form of anti-Semitism collectively constitute a stygian socio-political reality for France and for Europe as a whole.

The French middle class, liberal by nature and visionary due to its historical roots, is worried about the rise in populism and extremism that can be seen in the ascent of both ultra-right and extreme left-wing parties. Members of the middle class are also unnerved by the fact that large parts of their own cohort are falling under the spell of populist rhetoric in response to the gradual lowering of living standards – and to the fact that they have absorbed a daily diet of fake news and conspiracy theories.

International politics is gradually being transformed from a Thucydidian venue of smart power to a dystopian arena of sharp power. The upcoming elections will probably be the first time Europeans vote for an EU parliament under a bombardment of fake news and the spillover effect of Russian sharp power. The incessant attack on the western narrative as false is designed to promote a mental dissociation among western citizens from their political center of gravity: liberal democracy.

In a few weeks, Europeans will exercise their democratic right to choose their representatives in the next European parliament. Yet for the first time since the formation of the Union, millions of those Europeans will cast their votes for political elements and parties that promote Euroscepticism. They will turn against the globalized liberal economy and support the invalid view that the Fourth Industrial Revolution does not include them and their children in the structuring of new moral, ideological, institutional, and corporate regulations that constitute the opening of a new chapter of human history.

This is a critical parameter for the future of Europe and the stability of the Union itself. If radical political elements impose themselves in European states, the European narrative will be weakened, and the results will be exceedingly negative on many levels of European politics and economy.

First, a serious security gap will emerge. The defeat of ISIS’s jihadists, together with the retreat of fighters of the Hay’at Tahrir ash-Sham (ex al-Nursa) from their positions in Syria, means Europe will be under considerable pressure from returning jihadists who hold European passports, or from organized infiltration efforts by jihadists who want to reach western Europe in order to create new terrorist cells there. At a time when Europe needs political unity and close cooperation among governments in order to enhance its security networks, the EU is entering a new phase in which walls constructed by European forces that openly question the Schengen Treaty – i.e., the Visegrad group – are considered the new mechanism of defense against the tsunami of militant Islam. The EU has to work harder to apply a common security agenda that will be able to stop the rise of jihadism inside its borders and deter violence against western targets.

In order for the second of these to occur at an efficient level, it is useful to consider the deterrence apparatus in the Eastern Mediterranean; i.e. Greece, Cyprus, and Israel. If Europe is to acquire a high operational mechanism with which to face post-Syrian Civil War spillover effects, it will have to blend Europeanism with Transatlantic elements.

Soon enough, the Union will have to decide whether or not to evolve into a true political and economic entity in the international system with the potential to play a pivotal role in the future of the Transatlantic prospect or to follow the same course to oblivion that other currency unions, such as the Hanseatic League, took in the past. The coming years are likely to add to economic volatility in the EU.

Europe has considerably delayed its transition from service economy to Artificial Intelligence economy. The Union has fallen behind the US, Japan, India, China, and Israel, thanks mainly to the methods the European Central Bank elected to use to face down the economic crisis within EU ranks. Developments such as Brexit, the asymmetric interdependency on Russia in the energy sector, and the swift aging of the continent will affect the European welfare system in a highly negative way and create a grim economic future.

Moreover, Europe continues to face geostrategic challenges in its east, where Turkey’s ambivalence toward the western world combined with the antagonism between pan-Islamism and pan-Arabism in the MENA region will continue to produce new refugees eager to reach the more advanced and less volatile side of the Mediterranean. The EU seems to be without any persuasive central idea regarding issues like these that might have rallied its citizens around the flag. On the contrary: the nation-states within the Union are formulating different policies and chasing different diplomatic goals.

Israel has enjoyed unprecedented political stability due to the long presence of Benjamin Netanyahu in power. Greece will likely soon reenter the path of stability and accelerating growth due to imminent political developments. In the autumn, or perhaps even during the summer, national elections will be held, and every opinion poll yet published expects the government to be defeated by Nea Dimokratia, the center-right party.

The leader of Nea Dimokratia, Kyriakos Mitsotakis, is a liberal politician and a believer in the free market economy. If his party is in fact victorious, Greece will have the chance to reconstruct its economy by reentering the international economic scene. It will be seeking expedient foreign investments free of the current government’s ideological burdens, which include statism, overtaxing of the middle class, and excessive austerity.

Cyprus, which has discovered a large quantity of natural gas in the Glafkos target within the Cypriot Exclusive Economic Zone, has the potential to greatly increase its clout in the region and thereby apply considerable pressure to the finding of a viable and just solution in the Cypriot Conundrum.

But things are not bright for the rest of Europe. If the Union fails to reshape itself, it will enter an irreversible period of political and economic deterioration, starting from May’s Euro-elections. In both cases, Greece, Cyprus and Israel will have a more advanced strategic role for the future of the Eastern Mediterranean and also for the western presence in the region.

Dr. Spyridon N. Litsas is Associate Professor of International Relations at the University of Macedonia & Visiting Professor at the Sciences Po of the University of Grenoble and at the Supreme Joint College of War of the Hellenic Armed Forces. Follow him on Twitter: @Spyros_Litsas