Stories of agony ad absurdum: The Judge, the Painter and the News Ombudsman

‘‘My friend Güray Öz – You lived in Germany for many years. You have lived to learn democracy and freedom. In Turkey, one learns about those only by reading the books! In Turkey, a new breed of people emerged; those who don’t even understand what they read. Democracy and freedom have remained trampled on. A free individual wants also the entire society to be free. You know that during medieval ages a lot of people were subjected to inhuman treatment, torture, persecution because of their philosophical, political views and creed. Today your freedom is taken away, but never your honour…”

‘My dear fellow Güray – So many sins must have been committed on this soil that there are always people in prisons here. Tyrants who have forcefully seized the ‘land title’ of this country, have never been done with us at home or abroad; it doesn’t seem to end. No matter how many years we are in this struggle, there have always been greetings sent to those ‘inside’. Today I send you those…”

These two published letters – first by Cezmi Doğaner, the second by Rahmi Yıldırım – have been sent to a peculiar ‘political’ prisoner. 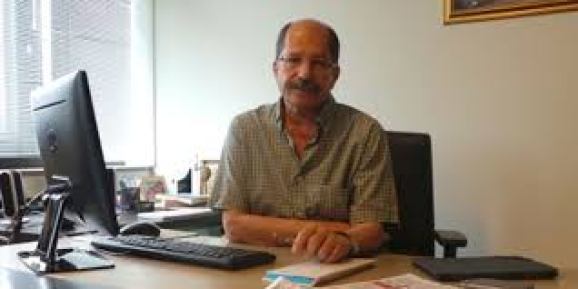 Our colleague Güray Öz, is one of the 13 top figures of Cumhuriyet daily held behind bears for 230 days – nearly 8 months – and he is the newspaper’s ‘ombudsman’.

He was serving for years in this noble role as ‘readers’ editor’ – taking in complaints about the content of the daiy and conducting independent inquries, writing a free column every week. ‘News ombudsman’ post has been a rarity in Turkish context – a tough job.

I remember it more than well, since I was the first ever readers’ editor in Turkey, serving as such for 15 years from 1999 until I was fired during Gezi protests. I met Güray, many years later, during a conference organized by Ebert Stiftung in Istanbul. It was early 2015; and we somehow knew that the calamity that would turn Turkey upside down was on the march. Although we disagreed in certain issues, I knew that I was talking to a gentle soul, open to listen to all sorts of ideas.

I am writing this because it should be noted that what makes Öz’s peculiar case is that he will go down in history as the first news ombudsman in the world to be jailed as part of a witch hunt.

This means that Turkish authorities have indicted a colleague with charges between 9 – 29 years of prison, alleging absurdly, ‘aiding a terror organisation without being its member’ – now along with the top editors of Cumhuriyet, also its conscience is behind bars; uncertain when he will be free. Irony upon irony: Öz and his friends’ first trial is set for July 24, which is celebrated by Turkish journalists as the anniversary ‘lifting of censorship’ – dating back to 1908.

No wonder that the deeper oppressive measures in Turkey become, the more absurd the tyrannic mindset exposes itself. It’s a well known pattern of history; but in current Turkish case, it simply boggles the minds.

Have you heard about the recent case of (Ms) Zehra Doğan?

Let me tell you. Zehra is both a painter and a journalist who served as reporter and editor with the now-closed Kurdish Jin Haber Agency until she was arrested on June 12 and put on jail. She was sentenced to two years, nine months, and 22 days in prison.

”For her paintings, for reporting about a Kurdish kid during the curfew, and for some social media notes” according to her lawyer.

Zehra had stayed in Kurdish town of Nusaybin during the security operations between 2015 and 2016 and was very intense in painting about the ‘siege’ of town. A week after the coup attempt she was arrested, and during her time in prison she continued to paint more, which she later displayed in an exhibition.

According to artnet.com website, the court handed down the sentence because she drew Turkish flags on buildings destroyed by Turkish force and it was Doğan’s sharing of the image of her work was the cause for her prison sentence.

“I was given two years and 10 months [jail time] because I painted Turkish flags on destroyed buildings. However, [the Turkish government] caused this. I only painted it,” Doğan posted in a now-deleted tweet.

“Art and paintings can never be used in such a way,” said Doğan’s lawyer, Asli Pasinli, according to an international organization committed to freedom of expression and creative activism.

“This is an attack on art and artistic expression.”

It is arguments like this coming from the defence of the accused that make the least impression or impact in today’s Turkey.

How could it, even when the most representative body in today’s world, the UN, begs to no avail to release a Turkish judge serving at the Hague-based UN Mechanism for the International Criminal Tribunals (MICT)?

His story is among thousands in the twilight zone called Turkey.

Let me tell you more.

Akay is a 66-year-old judge who is member of a five-member UN panel assigned in July to review the judgment of former Rwandan planning minister Augustin Ngirabatware. He was appointed to the position due to his impeccable credentials, until the nightmare began in late September last year when he was arrested for having a messaging application on his phone that was allegedly used by many of the plotters in the coup.

”Manslaughter”, ”membership of the Gülenist Terror Organisation (FETO)” and ‘attempt to overthrow the constitutional order” are the charges he was jailed for.

As a member of the MICT, Akay was granted full diplomatic immunity. In January, MICT gave Turkey a deadline till mid February to release Akay and halt legal proceedings; because he had the immunity.

Ankara claims the arrest has nothing to do with his official position, thus no immunity. He is still in prison, probably indefinitely.

Meanwhile, MICT is paralysed, unable to proceed in Rwandan case. All Theodor Meron, MICT’s President, can do is to complain that Ankara ignores his requests. The United Nations even referred Turkey to the Security Council for its continued incarceration, but as with many other instances in the world about Turkey, it equals to talking to a thick wall.

The grand irony is – there is an irony in almost every case in the pile of tragic purges in Turkey – that Akay is a man of the so-called ‘white elite’ in his homeland. Staunchly republican, his family is resident in one of Istanbul’s hardcore secular districts.

Outspoken as he is, he had made clear two points when he was arrested. He had downloaded the messaging app (‘bylock’) out of the blue, from Google Play Store, he said; he had no idea that many Gülenists were accused of being part of the coup plot because of it. ‘Not every one who uses it can be a FETO member. I am definitely not one. I did not even put a password on it’ he said.

His second point was, to say the least, profound.

Akay made it clear that, if any organisation, he was a member of the ‘Grand Lodge of Free and Accepted Masons of Turkey’. (This was repeated by his wife, in a lengthy interview done later with a western publication.)

Had there been any hint of an insight, memory or intelligence left among his interrogators, they should have known.

A ‘Gülenist’ being at the same time a ‘Mason’ is exactly like a Likud member being part of Hamas.

When I was finishing this blog, news ticker told me that Akay was found ‘guilty’ of FETO membership, because he had the app. He was sentenced to 7 and half years of prison. On waiting for appeals decision Akay was released, but he will remain banned from travelling abroad. So Meron and IMCT unfortunately will have to wait more to oversee Rwandan genocide case.

Reminiscent of the Rod Stewart album title, ‘every portrait in Turkish twilight zone tells a story’ these days.

I could tell you more. I will. It is only through those human stories this despicable Turkish nightmare will vividly be remembered years later.

Stories of agony ad absurdum: The Judge, the Painter and the News Ombudsman