BRUSSELS — An escalating dispute between Greece and Turkey over energy resources in the eastern Mediterranean is fast becoming militarized, raising the risks of a clash among NATO allies.

Foreign Minister Heiko Maas of Germany, who visited Greece and Turkey this week urging dialogue, warned both governments against further military escalation. “Fire is being played with and any small spark could lead to catastrophe,” he said on Tuesday.

As Germany tries to mediate, four of its fellow E.U. members, France, Greece, Cyprus and Italy, are engaged in military exercises involving ships and planes off the Cypriot coast. Their purpose, they say, is to deter Turkey from further energy exploration in disputed waters, something it has been doing for several weeks with vessels guarded by warships and jet fighters.

France has sided with Greece, sending ships and planes to the region last week. French officials have also criticized Turkey, a member of NATO but not of the European Union, for its support of the United Nations-backed government in Libya, which it has provided with troops in return for a controversial maritime energy deal that would extend Turkish drilling rights in the eastern Mediterranean.

The French defense minister, Florence Parly, while insisting that dialogue was her priority, announced the two-day military exercises Wednesday, insisting that “respect for international law must be the rule and not the exception.”

But the European Union is split on how to tackle the crisis. France, Greece and Cyprus want a tough line, while Germany, Spain and Italy favor a more conciliatory approach.

Those tensions will be discussed as European Union defense and foreign ministers meet this week in Berlin. The bloc has already objected to most of Turkey’s claims, including its Libya deal, which Washington also refuses to recognize.

Led by Greece, Cyprus and France, some E.U. members want sweeping new sanctions, and the bloc’s foreign-policy chief, Josep Borrell Fontelles, will present options for discussion in Berlin. But Germany, which holds the European Union’s rotating presidency, is eager to present some incentive to Turkey in return for de-escalation. 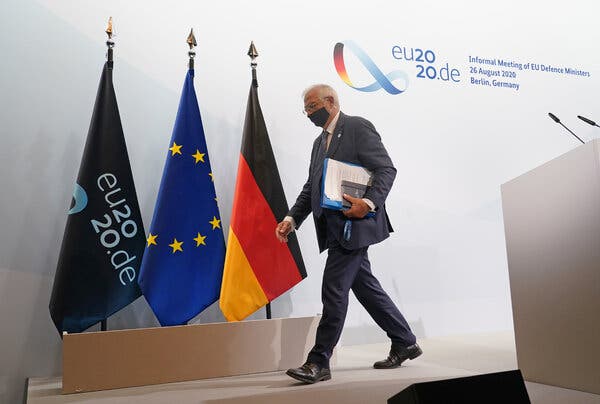 While Greece and Turkey have agreed to exploratory talks, Mr. Maas said, “it is clear that such talks can only take place and be successful in a constructive environment, and for that, all destructive activities must be ended.”

Turkey’s foreign minister, Mevlut Cavusoglu, said Tuesday that Ankara was “open to talks without preconditions, but when one side starts imposing preconditions, then there are many things we will put forth, too.” He warned Greece to “stop being bratty” and drawing red lines that could lead to conflict.

But Greece wants to limit talks to delineating the continental shelf and consequent energy rights in the eastern Mediterranean, and not to provide a blank slate for other Turkish grievances, like the status of Greek-inhabited islands in the Aegean.

The foreign ministers are not expected to make decisions on sanctions or incentives in Berlin, with the European Council president, Charles Michel, saying that the issues would be discussed at a summit of leaders on Sept. 24.

Tensions between Greece and Turkey go back, at least recently, to the Turkish invasion of Cyprus in 1974 and the island’s division. The two countries nearly went to war in 1996 over an uninhabited island, a crisis defused by U.S. diplomacy.

Although Washington has backed Greece and Cyprus with quiet diplomacy and some military support, including sending an aircraft carrier into the eastern Mediterranean, it is now letting Germany take the lead in managing the crisis.

Turkey has become more nationalist and assertive since the failed 2016 coup against the government of President Recep Tayyip Erdogan, who has pressed Turkish interests as far afield as Syria and Libya. Germany is also cognizant that Turkey houses up to four million refugees and migrants who might otherwise try to come to Europe.

Turkey appears to be pursuing what it calls “Blue Homeland,” an expansionist strategy to claim waters and resources in the eastern Mediterranean and Aegean controlled by Greece and other countries. The plan envisions Turkey taking over several Greek islands where hundreds of thousands of Greek citizens live.

While Greece may agree to take disputes regarding claims in the southeastern Mediterranean to international arbitration in The Hague, it will not negotiate about the Aegean.

The root of the current crisis was the discovery 10 years ago of massive natural-gas fields in the eastern Mediterranean. As more gas has been discovered and exploited, countries have asserted their rights to often-overlapping offshore areas known as exclusive economic zones. Some countries normally at odds — like Israel, Greece, Cyprus and Egypt — have cooperated on gas projects.

But the various consortiums have excluded Turkey, and Greece’s ownership of islands close to the Turkish coast gives Athens claims of exclusivity that rankle Ankara.

“Their aim was to imprison our country, which has the longest coastline in the Mediterranean, into a coastal strip from which you can only catch fish with a rod,” Mr. Erdogan has complained.

For example, Israel, Cyprus, Greece and Italy are planning a pipeline called EastMed to carry gas to European consumers, but Turkey’s more recent maritime claims cross its route, and Mr. Erdogan has vowed to block it.

Ankara argues that Cyprus has no right to exploit its gas resources until it reaches a deal to share them with Turkish Cypriots in the island’s north. Turkey, which is not a signatory to the U.N. Convention on the Law of the Sea, under which exclusive economic zones are set, contests those claimed by Greece and Cyprus and wants a larger one for itself.

Mr. Erdogan sent survey and drilling ships to explore off Cyprus this year, prompting mild European sanctions in February, and has done the same near the island of Rhodes. Greece said it would defend its territory, and Turkey overflew Greek islands with fighter jets and put naval vessels into the area. This month, a Greek frigate collided with a Turkish one protecting the survey ship, prompting the French decision to aid Greece.

The standoff has been the most serious confrontation between NATO allies since Turkey and Greece faced off in 1996.

Germany wants both sides to stop the chest-beating and talk. But shortly after Mr. Erdogan agreed to remove his research vessel in late July, the Greek prime minister, Kyriakos Mitsotakis, signed an energy deal with Egypt that would demarcate their exclusive economic zones. Mr. Erdogan responded angrily, saying that the countries had no mutual sea border and that the deal infringed on Libya’s zone. As Greece moved to ratify the deal, he sent his ships back again.

Mr. Mitsotakis wants to show firmness at home without unduly provoking Ankara, Greek officials say. But on Wednesday he announced that Greece would extend its territorial waters in the Ionian Sea to the west from six to 12 nautical miles, an entitlement under the U.N. convention, and that it reserved the right to do so elsewhere.

But he is unlikely to try in the Aegean, since Turkey has said that such a move would be grounds for war. 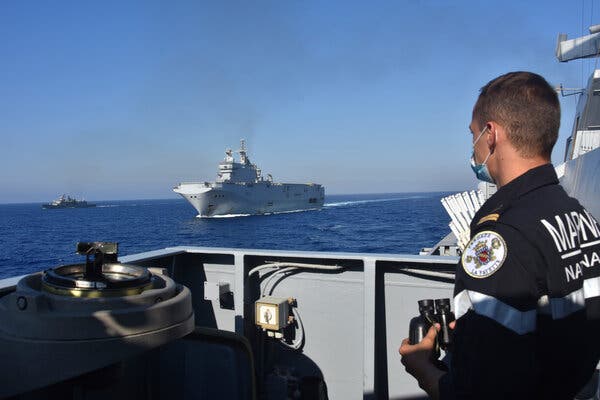 Mr. Erdogan said that Turkey “will take whatever it is entitled to” in the region, vowing that “we will never make concessions on what belongs to us.”

Given Turkey’s more aggressive and nationalist posture, many believe that the European Union must think through a different relationship with a country that remains a crucial NATO ally, trading partner and bridge to the Muslim world.

Stefano Stefanini, a former Italian ambassador to NATO, says Europe should stop “going through the motions” on the prospect that Turkey could become a member, a 21-year saga with negotiations stalled since 2016, and “discuss what could be a forward-looking, inclusive relationship with the E.U.”

That might include visa-free travel and a reform of the existing customs union, he said, “a generous relationship but short of membership.”

But that would presume a negotiated solution or acceptable arbitration to share the resources of the eastern Mediterranean.

A Standoff in the Mediterranean
Tiny Islands Make for Big Tensions Between Greece and Turkey
April 21, 2018 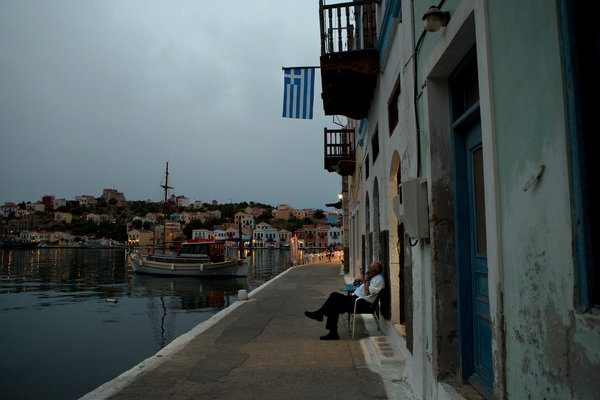 Taking Hard Line, Greece Turns Back Migrants by Abandoning Them at Sea
Aug. 14, 2020 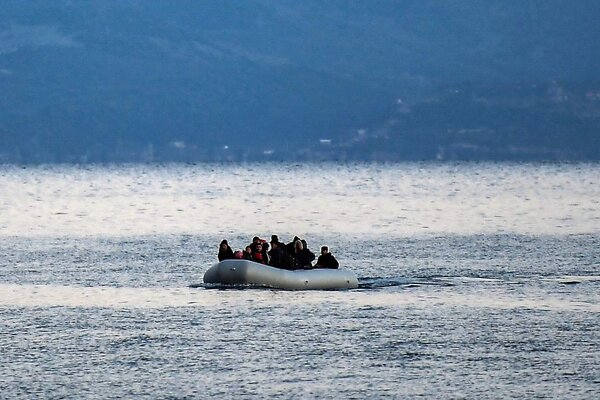 Turkey Steps Back From Confrontation at Greek Border
March 13, 2020 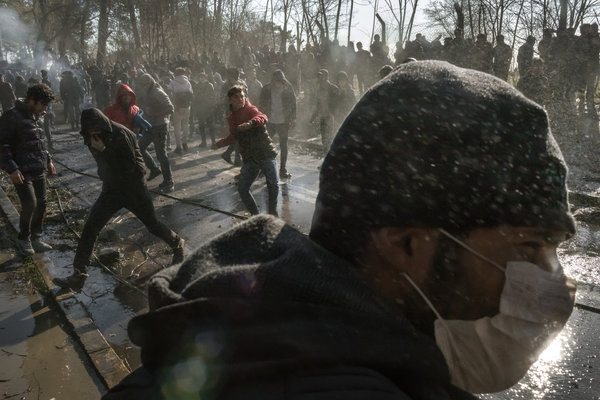 *Steven Erlanger is the chief diplomatic correspondent in Europe, based in Brussels. He previously reported from London, Paris, Jerusalem, Berlin, Prague, Moscow and Bangkok. @StevenErlanger