Can Israel, Greece, and Turkey Cooperate? 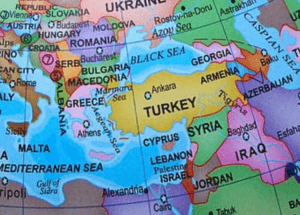 EXECUTIVE SUMMARY: The recent visit of Greek PM Kyriakos Mitsotakis to Israel was highly symbolic. This year marks the 30th anniversary of the establishment of full diplomatic relations between the two countries. It may well be possible for Jerusalem and Athens to cooperate with Turkey, though doing so will require all parties to be realistic about what is possible right now in view of the current state of relations with Ankara.

The father of Greek PM Kyriakos Mitsotakis, former PM Konstantinos Mitsotakis, made the far-sighted decision in 1990 to recognize the Jewish state de jure at the beginning of his term as Greece’s premier. Kyriakos Mitsotakis recently traveled to Jerusalem not only to honor his father’s wisdom but to further cement a burgeoning relationship. It is his first visit to a foreign country since the outbreak of the coronavirus pandemic. (His last stop outside his home country was Berlin at the beginning of March.)

In recent years, Athens and Jerusalem have greatly enriched their collaboration both bilaterally and trilaterally, with the participation of Cyprus. Trust is the key to success, and the more the countries talk to each other at the political level and beyond, the deeper their trust in one another becomes. This is what the Israel-Hellenic Forum, which was founded by B’nai B’rith and which the author co-convenes, seeks to facilitate.

The current situation in the Eastern Mediterranean is worrying. Although Israeli-Greek relations function as a pillar of stability, contradictory interests among bigger regional players are causing great uncertainty. Turkey in particular believes it is being treated unfairly and resents what it perceives as its exclusion from talks on energy discoveries.

Turkey is welcome to take part in the East Med Gas Forum (EMGF), though the terms of dialogue are set by the majority, not the minority. Israel, Greece, Cyprus, Egypt, Italy, Jordan, and the Palestinian Authority are already members of this forum and they all accede to its general principles. Turkey would have to do the same.

The question of inclusivity is complicated. Changes do not happen overnight, especially when issues like the Cyprus question have the potential to instantly derail mediation efforts. Other parameters, such as the problematic status of relations between Egypt and Turkey, need similarly to be taken into account.

The participation of the Palestinian Authority in the EMGF, however, shows that difficulties can be overcome. Also, new attempts by Jerusalem and Ankara to normalize their ties suggest that cooperation on some issues is possible despite disagreements on others.

To be fair, however, ongoing tensions in the Eastern Mediterranean do not allow for much optimism that a major breakthrough will occur.

A realistic objective—one that would leave room for further progress—would be the creation of a cooperative platform on themes that are not very sensitive. It is here where it would be worthwhile for Israel and Greece to explore synergies with Turkey. Other interested countries of the Mediterranean would be eligible to participate.

There are four fields of joint interest where they can begin.

First, the fight against COVID-19 requires better coordination. While the public health crisis is far from over, lessons from Israel and Greece in containing the virus and relaunching their national economies would certainly be useful for Turkey, which has been less successful in its own battle.

Second, the necessity to combat antisemitism could bring the three countries together. Progress on this issue has been significant in Greece and Turkey, but there is room for deeper action. The 2019 Report on International Religious Freedom, published recently by the US Department of State, concentrates on Greek and Turkish cases of antisemitism that outline existing hatred of Jews in societies.

Third, energy transition in the post-coronavirus era is another area of shared concern. Jerusalem and Ankara have already made impressive steps toward the production or usage of renewables, and Athens under its current government would like to catch up. The fall in oil and natural gas prices due to COVID-19 and the dangers of global warming make the common emphasis on green energy an obvious priority for all three nations.

And fourth, Israel, Greece, and Turkey are experiencing a similar type of Chinese investment, for example in the ports of Haifa, Piraeus, and Ambarli. Without overlooking American geopolitical calculations, they have the chance to focus on trade connectivity and maximize much-needed benefits through the implementation of Beijing’s Belt and Road Initiative.

Thirty years after the establishment of full diplomatic relations, Israel and Greece can turn a new page in their friendship and expand their partnership. By thinking outside the box, they can take the initiative of offering Turkey an opportunity to look beyond polarization and provocative or illegal policies. If there is enough political will, the dialogue will have a spillover effect.

This is a revised version of an article that appeared in the Jerusalem Post on June 28, 2020.

Dr. George N. Tzogopoulos is a BESA Research Associate and Lecturer at the European Institute of Nice and the Democritus University of Thrace.