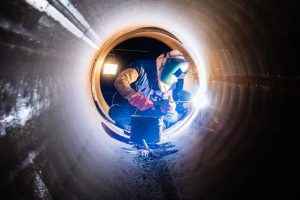 A consortium led by Saudi Arabia’s Arkad Engineering will build a pipeline from Bulgaria’s border with Turkey to its frontier with Serbia. (Shutterstock)
AFP

SOFIA: Bulgaria’s state gas network operator Bulgartransgaz on Wednesday chose a Saudi-led consortium to build a new pipeline through the country intended to hook up to Gazprom’s TurkStream project.
The consortium between Saudi Arabia’s Arkad Engineering and a joint venture including Switzerland’s ABB “had offered the most economically advantageous tender” for the 474 km (294-mile) pipeline to run from Bulgaria’s southeastern border with Turkey to its western border with Serbia, Bulgartransgaz said in a statement.
The group offered to complete the pipeline within 20 months for €1.1 billion ($1.2 billion), which Bulgartransgaz said was the lowest bid in the public tender.
The other bidder — a consortium of Italy’s Bonatti, Germany’s Max Streicher and Luxembourg-based Completions Development — offered a price more than the
€1.4 billion the government was ready to spend on the project.
Last November Bulgartransgaz announced plans to build the link in the hope of persuading Russian gas giant Gazprom to consider a link to its TurkStream pipeline through Bulgarian territory.
Bulgaria, which is heavily dependent on Russian gas for its domestic needs, will lose hefty transit fees when TurkStream becomes operational at the end of this year and Gazprom stops its gas deliveries to Turkey, Greece and Macedonia via Bulgaria in 2020.