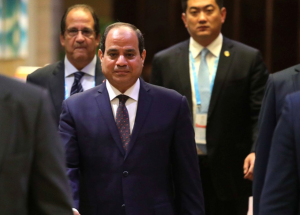 Egyptian President Abdel Fattah el-Sisi, photo via Office of the President of Russia

EXECUTIVE SUMMARY: Egypt’s withdrawal from the formation of an “Arab NATO” against Iran is a warning that both Israel and the US need to urgently rethink their strategy regarding the Middle East. Putting all its Arab World eggs in the Saudi basket could prove to be one of the more unsound decisions in the annals of American diplomatic history, and one that could profoundly affect Israel if it backfires.

Several weeks ago, Cairo discreetly notified Riyadh and Washington that it was suspending its participation in MESA (Middle East Strategic Alliance), the US-Saudi initiative to establish an Arab NATO to counter Iran. This means the idea of an Arab NATO has died in the very early stages of its gestation, since Egypt has by far the biggest, and one of the best equipped, armies in the Arab world – the only once with any capability of being an effective counterweight to Iran.

Although neither Cairo nor Riyadh nor Washington has officially confirmed the reports about this that have appeared in the Egyptian and western media, they provide an insight into current Egyptian thinking. The reports and commentaries in the Egyptian press are particularly illuminating, as they would never have seen the light of day without approval at the highest levels.

Articles published by various Egyptian columnists provide differing explanations as to why President Sisi has taken this decision.

One is that Sisi wanted to make clear his displeasure with what he believes the American peace initiative will contain. While this may be a contributing factor, it is at most a marginal reason.

There are three more likely reasons why Sisi has chosen to bail out of MESA.

One is his lack of confidence in both Crown Prince Muhammad bin Salman (MBS) and President Trump. Various reports quote Egyptian sources as having doubts about Trump’s chances of being reelected. Concerns are being voiced that a new Democratic administration would scrap the project and return to the Obama era’s policy of appeasing Iran. Egypt is also uneasy about MBS, the kingdom’s de facto ruler, whom Sisi and his advisors seem to regard as a loose cannon. They are also put off by Trump’s unpredictability, a trait most Arab leaders abhor. Sisi and the Egyptian defense establishment regard both men as prone to unsound, even reckless decisions. Sisi mistrusts Trump, who talks like an adventurist interventionist but acts like an isolationist. The bottom line is that Sisi and the senior Egyptian leadership fear that remaining in MESA is more risk than reward for Egypt.

The second reason is that Egypt, unlike the Saudis and their UAE allies, does not regard Iran as an existential threat. The High Command sees no reason to risk totally alienating Tehran for a nebulous initiative whose fate is irretrievably linked to leaders of whom Egypt is wary. They fear that Trump and MBS might make rash decisions that could lead to war, in which case Egypt would end up paying the highest price.

Egypt regards Ethiopia and Sudan, which control the upper parts of the Nile, as its prime national security concerns. Both countries harbor ambitious plans to build large hydroelectric stations on their parts of the river. Egypt regards anything to do with the Nile as of vital national interest, which, given its dependence on the Nile and its annual seasonal flooding, is hardly surprising. Cairo has repeatedly made clear that any such construction done without its approval would be a casus belli. Egypt needs to ensure its army can project sufficient deterrence to prevent its having to fight a war to prevent either country from embarking on a unilateral dam construction on the Nile. Incurring major losses in an unplanned and unnecessary war with Iran does not serve this purpose.

The third reason is Gaza, which is ruled by Hamas, defined by its covenant as “one of the wings of the Muslim Brotherhood in Palestine.” Sisi has ruthlessly persecuted the Brotherhood in Egypt, and in a perfect world would probably love to eject it from its Gaza fief. Sisi knows, however, that he does not live in such a world. Egypt, despite its dependence on Saudi largesse, has continued to maintain its ties with Qatar, which is under Saudi blockade over its unwillingness to toe the Saudi line regarding Iran. Qatar’s leader, Sheikh Tamim bin Hamad at-Thani, opposes Riyadh’s bellicosity toward Tehran, with which he has maintained diplomatic and trade relations. Under his leadership, Qatar is also supportive of the Muslim Brotherhood. He maintains close ties with Turkish President Erdoğan and its Islamist AK Party, and of course Hamas.

Sheikh Tamim is one of the key “go-to guys” when the situation in Gaza gets out of hand. Qatar has provided the cash that keeps Hamas solvent, and therefore at least somewhat restrained, ever since the PA imposed sanctions on what it regards as the rogue government of a breakaway territory. In return, Hamas listens to Qatar, which does not want it to help the ISIS-affiliated factions involved in an armed insurrection against Egyptian forces in northern Sinai.

Egypt’s military is having a hard enough time coping with the insurgency as it is. The last thing it needs is for Hamas to be given a green light to cooperate with ISIS forces in Sinai. Staying in MESA could strain Egypt’s relations with Qatar, which would not be in its interest as Cairo prefers to adopt a more balanced, less partisan position. It will remain a Saudi ally, but within limits.

Over the past decade, ever since Benjamin Netanyahu returned to power, Israel has also been gradually placing more and more chips on its still covert but growing alliance with Saudi Arabia. Egypt’s decision to pull out of MESA should give it cause to reconsider. Without Egypt, MESA has zero viability unless it is to include either US forces or Israeli ones. Given the constraints any Arab government, even one as autocratic as Saudi Arabia, faces regarding overt cooperation with Israel so long as there is not even a hint of some kind of deal with the Palestinians, the chances of winning the lottery seem infinitely higher than those of MESA’s including the IDF in advance of such a deal.

Given that Egypt, the Arab world’s biggest and militarily most powerful state and its traditional leader, has clearly indicated its lack of confidence in the Saudi leadership, Israel should urgently reexamine its strategy in this regard. It may be sound domestic politics but could prove to be a very risky strategy, especially if the White House has a new Democratic resident as of January 2021.

Jonathan Ariel is a South African native who served as an intelligence officer with the ANC and subsequently worked with Mandela. In Israel he was News Editor of Makor Rishon, Editor-in-Chief of Ma’ariv International, and Editor-in-Chief of Jerusalem Online’s English-language website Channel 2 News.