Soner Cagaptay on Erdoğan’s Turkey: A “Democratic Comeback” Is Possible 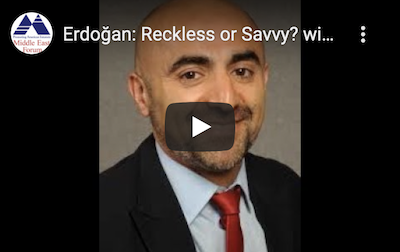 Soner Cagaptay, Beyer Family Fellow and director of the Turkish Research Program at the Washington Institute for Near East Policy and author of A Sultan in Autumn: Erdoğan Faces Turkey’s Uncontainable Forces (2021), spoke to an August 20 Middle East Forum Webinar (video) about what lies ahead for Turkey and its president, Recep Tayyip Erdoğan.

Cagaptay considers Erdoğan “one of the most consequential leaders” of modern Turkey because of his impact on its political trajectory and place in the world. Within his first decade of taking power, according to Cagaptay, Erdoğan “tore down” the secular political system founded by Mustafa Kemal Ataturk a century ago as the Ottoman Empire transitioned into the secular Republic of Turkey.

From 2003 to 2013, Erdoğan consolidated his rise to power through economic policies that built the country’s prosperity, successfully transforming its growth through foreign investment. As his popularity soared, Erdoğan moved against the secularist Turkish military, which saw itself as the “guardian of Ataturk’s legacy” and had taken steps to suppress Islamist political parties for years.

Erdoğan allied with Fethullah Gülen, an imam and influential opinion-leader who had fled into exile in the U.S. in 1991 under pressure from military opponents. Gülenists who had widely infiltrated the police assisted Erdoğan by building a court case in 2008 against Ergenekon, an alleged “deep state” secularist clandestine organization supposedly plotting to launch a coup against him. Hundreds of high-ranking military officers, journalists, university professors, and others opposed to Erdoğan were arrested. In building a case against Ergenekon, Gülen was “complicit in undermining checks and balances” in Turkey and helping Erdoğan “create a republic of fear in which opposing Erdoğan through ideas was criminalized.”

In 2010, Erdoğan enlisted the support of Gülen-owned media to help him win a “constitutional reform” referendum enabling him to “appoint a majority of judges to the high courts without a confirmation process, eliminating judicial independence.” The following year, Erdoğan’s secular opponents in the Turkish military threw in the towel, noted Cagaptay, resulting in the resignation of the “military’s top brass … en masse.”

Once their adversaries were defeated, the Erdoğan-Gülen alliance soon ruptured, setting off a power struggle culminating in a failed 2016 “coup attempt” by “Gülen-aligned officers.” The failed coup attempt and the massive crackdown on Gülenists that followed interrupted a decade of economic growth and left Erdoğan shaken.

The fallout from the Erdoğan’s crushing of domestic opposition had repercussions on Turkey’s foreign policy. As Turkey’s difficult European Union (EU) accession bid stalled, Erdoğan launched “foreign policy initiatives” in the Middle East that broke with the policies of Washington and the EU. Turkey’s meddling in Syria to oust the Assad regime came as Western governments were turning their attention from Assad to ISIS. The U.S. allied with the Syrian Kurdish YPG (People’s Protection Forces), an offshoot of the PKK (Kurdistan Worker’s Party), a U.S.-designated foreign terrorist group fighting a separatist war against the Turkish government. Erdoğan rejected working with the YPG and later directed its Syrian proxies to fight it, straining U.S.-Turkish ties.

Erdoğan’s involvement in Syria initially ran afoul of Russia, which deployed troops there in 2015 to protect the Assad regime. The potential for clashes between Ankara and Moscow called to mind the history of some 17 Russian-Turkish wars prior to the collapse of Czarist Russia, overwhelmingly with Russia the victor. Russian president Putin made a “strategic decision” to reach out to Erdoğan in the wake of the failed 2016 coup attempt, inviting him to Konstantinovsky Palace in Russia’s imperial capital of St. Petersburg for talks. Putin staged this symbolic gesture at the site where past Russian czars had led hostilities against Turkey to signify a new era of rapprochement between the historic rivals.

Putin offered Erdoğan a “soft power-sharing deal” in Syria that protected the interests of both governments there in hopes of “peeling Turkey away from the U.S.” orbit. While Erdoğan was allowed to target the YPG, Putin exacted a commitment that there be no threat against Assad. Similar arrangements were later reached in Libya and the south Caucasus, where Turkey and Russia also backed opposing sides. Putin also required Erdoğan purchase Russia’s S-400 missile defense system, triggering U.S. sanctions against Turkey.

Cagaptay said the “tenuous” arrangements between Putin and Erdoğan place Erdoğan’s image at home as a nativist “strongman” in a vulnerable position should he choose to act independently in any of the theatres where Russia has a presence, i.e., Syria, Libya, the south Caucasus, the eastern Mediterranean, Cyprus, Crimea, eastern Ukraine and the Black Sea.

Erdoğan also faces challenges domestically as a result of the population displacement from the Syrian civil war. Turkey’s weakened economy is further strained by the presence of four million Syrians, the “largest refugee population in the world” and comprising 5% of the population. The welcome for the refugees “is wearing thin.”

Slow economic growth and the zeal with which Erdoğan has “demonized and brutalized” his opponents could pose a political challenge for him ahead of the next round of Turkish national elections in 2023 (or possibly earlier). Opinion polls show waning popularity for Erdoğan and his candidates. “Numerically, right now opposition parties seem to be in the lead,” Cagapty said, though much depends on “whether the opposition maintains a unified bloc.” To be reasonably sure of prevailing, Erdoğan “needs really strong [economic] growth … strong meaning nearing double digits.”

The need to revive Turkey’s failing economy may temper Erdoğan’s anti-Western impulses. Notwithstanding Erdoğan’s efforts to “recast Turkey’s identity” away from the West, “resource-poor …Turkey’s economy is completely integrated to that of Europe.” It is also heavily dependent upon global investment, making the maintenance of good relations with the U.S. and the EU a necessity. Erdoğan is also dependent upon good relations with China for “mega-construction projects,” and beholden to Russia to avoid “trade and tourism sanctions” that would damage the economy. He is also trying to repair relations with the Arab states and Israel to facilitate economic recovery.

Although some Turkey analysts are dismissive of the prospect that electoral defeat will bring down Erdoğan (“If he cannot [maintain power] legitimately, he will do so illegitimately,” writes Middle East Forum President Daniel Pipes), Cagaptay does not rule out a “democratic comeback” for Turkey given that the country “has a very strong democratic opposition, civil society and democratic resilience.” If the lesson of Afghanistan is that it takes a long time to build democracy, Turkey will show that it “takes a really long time to kill a democracy,” he added. “So I have a lot of hope in a future democratic Turkey.”

Marilyn Stern is communications coordinator at the Middle East Forum.