Russia-Ukraine war: How Moscow’s tactics are evolving in Ukraine 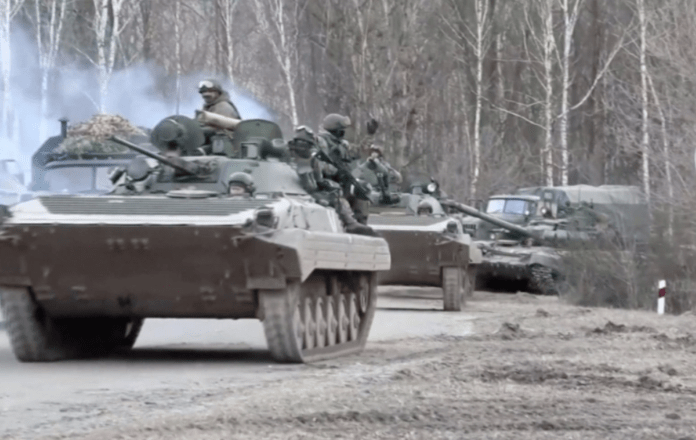 The last week has seen a marked change in tactics from the Russian military as the scope of the war in Ukraine has widened.

Advanced weapons, especially man-portable anti-tank and air defence systems, as well as small arms and ammunition, have been pouring into Ukraine.

These have made a significant impact on the battlefield as Russian tanks, armoured vehicles, supply trucks and helicopters have repeatedly been targeted and destroyed.

These attacks have helped slow Russia’s advance as it continues its drive into the country from three directions – from the north towards the capital Kyiv; from the east with a focus on besieging Kharkiv and Mariupol; and from the south, where Russian units, having taken Kherson, have crossed the Dnieper River in two places and are now advancing along both sides of it, as well as pressuring the city of Mykolaiv and the Ukrainian defences near the city of Zaporizhzhia.

Russian units have consolidated their grip on Mariupol, taking surrounding towns and widening the corridor that links Crimea to Donetsk. Only a small strip of coastline, centred around the port city of Odesa, is now under Ukrainian control.

It is not just weapons that are flooding into Ukraine. Volunteers are streaming into the country by any means they can in order to fight.

More than 60,000 Ukrainians from its diaspora have returned to the country and are now engaged in fighting Russia, according to Ukraine’s defence minister, Oleksii Reznikov.

Foreign fighters are all also making their way, driven by a variety of ideologies and reasons, with Ukraine saying that 20,000 people have applied to join the international legion created in response to the Russian invasion.

Russia has announced that it, too, will receive foreign fighters, mainly Syrians with experience of urban combat, in an effort to shore up its armed forces, which have so far performed poorly.

This is one of the big surprises of the war so far: that Russia’s military with its “new” professional army has barely achieved any of its strategic objectives and, in terms of applied combat power, logistics, command and control and general morale and focus, has underperformed across the board.

Russia has finally cottoned onto the fact that this vast influx of weaponry and manpower is having an effect on its military and has now taken steps to halt the flow.

Ukrainian airbases at Ivano-Frankivsk and Lutsk in the west of the country were attacked and severely damaged in an effort to degrade Ukraine’s Air Force, a move that might have been expected in the opening hours of the invasion but which came nearly three weeks late.

A Ukrainian base in Yavoriv, near the Polish border, which is used to train foreign fighters, was obliterated by missile attacks as Russia tried to interdict the stream of men and materiél pouring over the border.

Russia has clearly turned its sights from the immediate battlefields in the east to the relatively unscathed west of Ukraine.

After the Kremlin threatened to target Western arms shipments to Ukraine, NATO had warned that they would be defended if they were attacked beyond Ukraine’s borders.

This is now a potential flashpoint that could draw NATO into a wider conflict as Russia is desperate to stop arms flowing east to Ukraine’s military.

A general war in the region, involving nuclear powers is what all sides are trying to avoid as the results would be catastrophic for Ukraine, Russia, Eastern Europe and beyond.

Russia’s tactics have toughened as hospitals and other civilian infrastructure has repeatedly been hit by air raids and artillery shells.

The coordinates of these hospitals are known to Russian military planners, the buildings are large and easily identified from the air. One or two attacks might be a mistake, one of the dreadful realities of war, but any more than that shows a deliberate strategy to make life unbearable for the local civilians who will then flee to unoccupied areas, quickly overwhelming the meagre resources of the towns and cities near the front lines.

These tactics have been seen in Mariupol, Kharkiv and are likely to be applied to the capital Kyiv and to Odesa as Russia focuses on the next stage of the conflict.

The north – Kyiv and the convoy

The Ukrainian capital has been a Russian strategic goal from the beginning of the war. A huge convoy, comprising hundreds of vehicles, tanks, artillery, armoured personnel carriers and supply trucks advanced towards Kyiv, only to stop some 25km (15 miles) from the city, well within Ukrainian artillery range.

There it stayed, a potential target some 64km (40 miles) long, immobile on a single road for 10 days.

It is one of the big mysteries of the war so far. Why did the Russians advance so close then stop? And why did the convoy not at least spread out to protect itself?

There have been reports that the head of the convoy was attacked so its advance stalled; that the Russians ran out of fuel, or less likely, that cheap Chinese tyres used by the Russians could not handle the rough roads and burst.

But there is a second part to this mystery: Why didn’t Ukrainian long-range artillery destroy at least part of the convoy?

At the start of the war, the Ukrainian military had 354 multiple rocket launchers (MRLs), including over 80 of the locally made Alder precision-guided MRLs which, with a range of 70km, could easily target the whole of the convoy.

But it did not.

That Ukraine did not attack such an obvious virtually stationary target has baffled outside observers but the most common explanation among Ukrainians is that they didn’t want to escalate the conflict by inflicting large numbers of Russian casualties.

The opportunity to destroy the convoy has passed, as it has dispersed and is now part of the Russian effort to take the city. The outlying towns have been heavily shelled and Kyiv itself has been hit multiple times, the frequency of attacks increasing by the day as the capital readies itself for a ground assault by Russian troops and armour.

The south – Mariupol and Odesa

As Russia focuses on besieging cities, the southern front is where it has been more successful. Most of the coastline is now in Russian hands.

The city of Mariupol is the only hindrance to Russia linking up the Crimean Peninsula with Donetsk. Witness to some of the worst fighting, the city has been extensively damaged with whole neighbourhoods levelled by Russian artillery and air raids.

While the Ukrainians are holding on, supply is becoming an issue and the humanitarian situation is getting worse despite successive attempts to open up humanitarian corridors for civilians to leave the city. Towns to the north of Mariupol have been taken by Russia as the cordon around the besieged city widens.

Odesa, Ukraine’s biggest port, is bracing itself for a Russian attack. A former Russian tourist destination, its 40km (25-mile) stretch of beach and coastline has now been mined, strong points have been built all through the city as the Ukrainian military and volunteers prepare for the urban battle they fear is coming soon.

There are reports a large Russian amphibious fleet is now approaching Odesa from the Crimean Peninsula. The Russians had cautiously set up a distant blockade of the port, so far avoiding a direct assault on the city.

If Odesa falls into Russian hands, it will be a serious blow to Ukraine’s war effort, as the port handles two-thirds of all cargo arriving by sea.

Russian mechanised infantry units are now slowly advancing north along both sides of the Dnieper. The strategic cities of Zaporizhzhia and Dnipro have turned themselves into fortresses as they are inundated with refugees fleeing the fighting, further straining already overstretched resources. Situated at the bend of the Dnieper River which bisects Ukraine from north to south, their possession is vital to both sides as Russian forces slowly push their way north.

Much has been said about the slow Russian advance but despite Ukraine’s vigorous efforts, they are advancing. The siege of Ukraine’s western cities is continuing. The whole area around Kherson is now under Russian control and a successful assault on Odesa would seal Ukraine off from the sea, turning it into a landlocked country, blocking the majority of the country’s much-needed imports.

With so much at stake for both sides, the conflict does not look like it will end any time soon. Casualties are set to rise sharply, Ukraine’s neighbours are already close to saturation point as refugees continue to pour over the border. The danger of escalation is ever-present as Russia struggles to maintain both its military offensive in Ukraine and also its grip on public opinion back at home. Vladimir Putin’s political survival is increasingly linked to a successful outcome for Russia in this war, the rising death toll and slow speed of its prosecution backing him steadily into a corner, and cornered presidents are dangerous.