“No One Is Wearing Ties in Kyiv These Days” 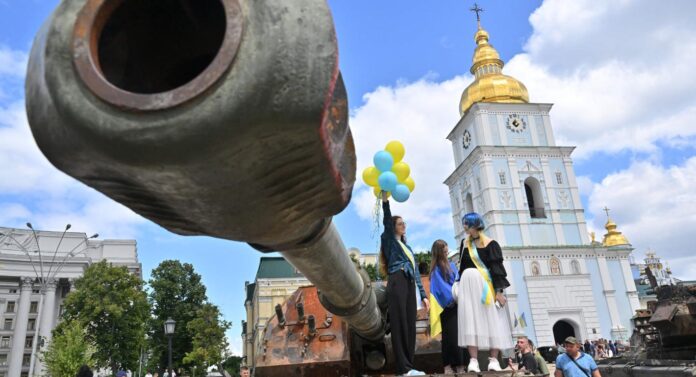 Source: Getty
Summary:  The Ukrainian capital embraces a new normal against the backdrop of war.
Related Media and Tools

As summer arrives in Kyiv, the city’s inhabitants seem to breathe in unison: an inhale of quiet defiance and an exhale of grief laced with worry. The city’s sculptures suffocate under sandbags meant to protect them from air strikes. Czech hedgehogs—the tank traps that look like giant playing jacks—are still gathered at the ready in the Maidan. The city appears peaceful, but many of its residents are pulled tight like the strings of an instrument, living with the triple anxiety of what has happened, what is happening, and what might happen next.

After failing to capture the capital in the first weeks of its brutal war against Ukraine, Russia pulled its troops back from the city’s suburbs, leaving schools, hospitals, and apartment blocks in rubble and the broken bodies of hundreds of civilians subjected to ghoulish crimes: torture, rape, and executions. Today it is haunting to walk through the square in front of the 1,000-year-old St. Sophia Cathedral—the expanse and the beautiful buildings that frame it are eerily quiet but unscathed. And yet, just 20 miles to the northwest, lies the moral and physical wreckage of Bucha, the suburb that has become emblematic of the most stomach-turning horrors.

Russian forces have refocused their efforts on the Donbas, Ukraine’s eastern region, where they have been making painful gains in recent weeks. But Ukraine’s other cities are still sporadically hit by missile strikes. Kharkiv, Ukraine’s second-largest city, is under renewed persistent bombardment. Several rockets landed on and near a Kyiv railroad depot in early June. Inhabitants say they know that “he”—Russian President Vladimir Putin—might renew attacks at any time. Air raid sirens still go off periodically—there were two within a few hours when four European leaders visited Kyiv last week—and polite signs in the city center direct visitors toward bomb shelters. But I didn’t see anyone take cover. Instead, when the air raid begins, everyone looks at their smartphones—when you’re living through a twentieth-century war taking place in the twenty-first century, there’s an app for air raids—and then resumes their activity. A friend told me that he and his daughter used to go to the shelter in their apartment building, but not anymore. The sirens have undeniably become part of “normal” life in the city. But people don’t seem dismissive of the threat; rather, they acknowledge it, take a beat, and move on, because when everyone is already on edge, the added stress of running to a shelter twice a day might break you. They aren’t desensitized—they’re prioritizing.

There are signs of the war everywhere in the city: in the presence of uniformed military, in the makeshift barricades draped in homemade camouflage outside government buildings, in the street art. I showed up to a meeting with a senior Ukrainian diplomat wearing a tie and blazer, and seeing that he wasn’t wearing one, I took off my tie. “No one is wearing ties in Kyiv these days,” he said—perhaps the only welcome casualty of the war. The next day, at a meeting with the prosecutor general and her team, the men were wearing polo shirts. On the street, many pedestrians are wearing blue-and-yellow patriotic T-shirts, some announcing simply “I am Ukrainian.” Kyiv shows off in June. The early summer is warm but not hot. The chestnut tree flowers have disappeared, leaving a city bedecked by lush green canopies. Archways give way to leafy courtyards, and the central part of the city is laced with charming streets boasting an array of hipster coffee shops, most of which have reopened. Kyiv has a feeling that is all its own, though recognizably and undeniably European.

Some who fled for safety in the early weeks of the war are beginning to return. (My train from Poland had a number of returnees, many accompanied by pets.) The city is still subdued—the Bessarabian market hall was quiet on a recent weekday morning, but many of its vendors were back at their stalls selling strawberries and cherries, spices, fresh meat, fish, and caviar. The nightly curfew has been moved back to 11 p.m.—restaurants close around 9 to allow their employees to get home—so the city goes to bed as the last rays of sunlight fade into night.

Kyiv is not buzzing, but it is humming. It is unmistakably alive, even if war hangs heavy in the air. The normal scenes are paradoxically the strangest part of being there. When the war is a backdrop for everything, pedestrian interactions—ordering oatmeal and cappuccino at a café, taking an Uber, an evening walk with a friend—all feel surreal.

Trash is still getting picked up. The city is clean. “Banks are open. We go to work. State services continue,” one young Ukrainian marveled, more to herself than to me and a colleague. The persistence of the ordinary is inspiring. “We are so resilient!” she said, almost gushing.

Dan Baer is acting director of the Europe Program at the Carnegie Endowment for International Peace.
End of document

Carnegie does not take institutional positions on public policy issues; the views represented herein are those of the author(s) and do not necessarily reflect the views of Carnegie, its staff, or its trustees.