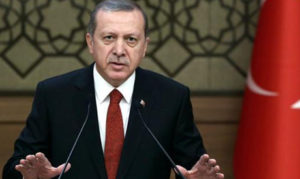 In his speech Saturday, at the 28th Consultation and Evaluation Meeting of the Justice and Development Party (AKP) in Ankara, President of Turkey Recep Tayyip Erdogan discussed the “events of 1915 and the Armenians’ claims” of being subjected to “genocide” during World War I, explaining that “the deportation of the Armenians was not genocide, nor a major disaster, but was a painful incident that occurred due to the harsh circumstances in which the process of deportation took place.”“If Armenian claims were true, we would not be speaking today of millions of Armenians living in large areas of Europe, America, North Africa and the Caucasus,” Erdogan added.

“I am afraid that this argument is a Turkish way to have the genocide trivialised and ultimately denied,” Greek genocide scholar Vasileios Meichanetsidis told Al-Ahram Weekly in interview. “The fact that there were Armenian, Assyrian/Aramean and Greek genocide survivors does not mean that there was no genocide; it rather means that the Turkish-perpetrated campaign for total extermination of these nations partly failed, thank God.”

Meichanetsidis recalled that there were also Jewish survivors of the Nazi-perpetrated genocide. “This does not mean that the genocide did not take place. In most genocides, there are a certain number of survivors.”

In his speech at the AKP gathering Erdogan stressed that the place to look for truth about these events is not the headquarters of parliaments and governments, but the archives of different countries, including Turkey and Armenia, and those authorised to do so are historians and scientists from both countries, as well as international experts, adding that his country cannot be accused with the term “genocide” because his nation was in the place of the slain and not the killer during that period.

Washington based Turkish analyst Uzay Bulut argues that the Turkish state does not have just one policy or rhetoric concerning the 1915 Armenian Genocide. “There are four main narratives in Turkey.” The first one is “we did not slaughter Armenians; Armenians slaughtered us. This narrative is what is taught to Turkish schoolchildren in middle and high schools. Accusing Armenians of being the actual perpetrators of genocide is a popular myth in Turkey,” Bulut told the Weekly.

According to Bulut, another narrative is “a tragedy happened during World War I. Armenians slaughtered us, and we slaughtered them. It was civil war. Let’s forget about it.” This is the one Turkey uses for international observers. In essence, what this message declares is this: “What happened in 1915 was never genocide. People kill each other in all wars, so let’s leave it all behind and move on.” “So, this narrative, which is more ‘moderate’, is intended for the outside world, and particularly for the West, to improve Turkey’s image in the international arena,” said Bulut.

Erdogan’s remarks came in response to French President Emmanuel Macron’s decision to commemorate the Armenian Genocide for the first time as a “national day” on 24 April in France, as promised in February.

Directing his words to the French president at the gathering of his ruling party in Ankara, Erdogan said: “Delivering a message to 700,000 Armenians who live in France will not save you, Monsieur Macron.”

“Learn first to be honest in politics — if you are not, you cannot win,” said Erdogan, adding he had told Macron his views several times face to face. Turkish officials stressed that France should look first at its own record, notably in Algeria and its role in the 1994 Rwanda Genocide.

Some 30 countries and a number of historians inside and outside Turkey recognise the 1915 massacre of 1.5 million Armenians as genocide.

Another narrative is, “yes, Turkey committed genocide. This rhetoric is never directly stated by the Turkish government, but it is, at times, tolerated when presented by some intellectuals in the country,” Bulut told the Weekly.

On the same day of the commemoration, 24 April, Turkish President Erdogan also sent a letter to acting patriarch of the Armenians of Turkey, Reverend Aram Atesyan, offering his condolences to the “grandchildren of Ottoman Armenians who lost their lives in the harsh conditions of World War I”.

In his letter, the Turkish leader praised the Armenian community of his country “who provided great contributions by bringing up esteemed citizens both during the Ottoman Empire and throughout the history of the republic,” adding: “It is our common objective for these two peoples, who have shared their grief and joy throughout history, to heal the wounds of the past and further strengthen their ties.”

Erdogan concluded his letter by warning Armenians of Turkey against circles who want to poison this shared past by sowing hatred and hostility. “I kindly request you to avoid helping those who seek to create hatred, grudge and hostility by distorting our common history.”

Bulut sees that another narrative could be “yes, we did slaughter Armenians. If they do not behave, we will slaughter them again.” “This narrative expresses pride in the genocide, and additional threats to the Armenian community in Turkey.” According to Bulut, this sentiment is also openly and frequently expressed across Turkey.

Meanwhile, and for the third year, US President Donald Trump failed to properly condemn as genocide the Ottoman Turkish government’s annihilation of millions of Armenians, Greeks, Assyrians and other Christians in his annual 24 April commemorative statement.

“For far too long, Democratic and Republican administrations have sold US policy on the Armenian Genocide to Turkey, as if it were a political commodity. Armenian Genocide denial is a policy set in Ankara, exported to America and enforced by US officials. American enforcement of Turkey’s gag-rule represents a national disgrace,” Executive Director of the Armenian National Committee of America (ANCA) Aram Hamparian told the Weekly.

According to Greek scholar Meichanetsidis, the American stance is immoral and shameful. “It is not based on essential reasons pertaining to the historical facts involved, but rather based on political, strategic and economic expediency.”

On the other hand, the vast majority of US states have already recognised the Armenian Genocide, while a growing number of states have initiated the process of recognising the Greek and Assyrian/Aramean genocides as well. “This parallel process constitutes valuable recognition from the part of the United States, in anticipation and preparation for recognition of the genocides by US Congress as well. I am confident that this recognition is simply a matter of time,” Meichanetsidis told the Weekly.

While on the issue of Turkey’s membership to the European Union, Erdogan claimed that the only reason why Turkey did not get full membership is the inconsistent policies of the Union and the obstacles placed by its institutions, especially the European Parliament, which is baselessly criticising Turkey. “The European Union must stop the policy of procrastination and decide whether it wants to develop relations with Turkey and accept its membership or else everybody should find its way,” Erdogan warned in his speech.

There are several reasons Turkey is unfit for EU membership, from political and legal to economic considerations. “One of the most important reasons making Turkey unfit is its obstinate denial of the genocides it has perpetrated against its native Christian peoples of Armenians, Assyrians/Arameans and Greeks,” said Meichanetsidis, adding that continuous Turkish denial and ensuing revisionism of well documented historical facts is a source of wider European and international concern. “Recognition is a matter of principle for the European Union and its values, cohesion and process of further integration and unification.”

“The example to be followed in such matters has been set by post-war Germany. In other words, without Germany’s regret for World War II and the crimes perpetrated during the war (the Jewish genocide, the war crimes and crimes against humanity in the occupied countries), the process of reconciliation and cooperation between Germany and European nations which suffered from German occupation would not have been possible at all. The entire history of Turkey shows that it is not only unregretful of past crimes committed in its name, but also permanently recidivist in terms of human rights abuses.”

“The grave human rights violations committed in the period between the collapse of the Ottoman Empire and the genesis of the Turkish state, and throughout the Republican period to nowadays, are the dark legacy the Kemalist Turkish Republic has been built upon and which the Turkish state perpetuates,” Meichanetsidis told the Weekly. He believes that genocide revisionism helps explain the prevailing mindset in Turkey that the state is allowed to break the law and to mistreat the citizens without regard. “Such an aggressive and recidivist state has no place in the European Union. Turkey cannot be a member of the European family, for values constitute one of the main pillars upon which the European project is built,” Meichanetsidis concluded.

*This story was first published by Al-Ahram Weekly.