Brzezinski, ex-aide to former US President Carter, dies at 89

His death was announced on social media Friday night by his daughter, MSNBC host Mika Brzezinski. She called him “the most inspiring, loving and devoted father any girl could ever have.”

In a statement, Carter called Brzezinski “a superb public servant” as well as “brilliant, dedicated and loyal.”

Born in Warsaw and educated in Canada and the United States, Brzezinski was an acknowledged expert in Communism when he attracted the attention of US policymakers. In the 1960s he was an adviser to John F. Kennedy and served in the Johnson administration.

In December 1976, Carter offered Brzezinski the position of national security adviser. He had not wanted to be secretary of state because he felt he could be more effective working at Carter’s side in the White House.

In this Feb. 14, 1979 photo, President Jimmy Carter, flanked by Secretary of State Cyrus, right, and his adviser on foreign policy, Zbigniew Brzezinski, left, walk toward a waiting helicopter to fly to the nearby Andrews Air Force Base, Md. (AP Photo/Bob Daugherty, File)

Brzezinski often found himself in clashes with colleagues like Secretary of State Cyrus Vance. For the White House, the differences between Vance and Brzezinski became a major headache, confusing the American public about the administration’s policy course and fueling a decline in confidence that Carter could keep his foreign policy team working in tandem.

The Iranian hostage crisis, which began in 1979, came to dramatize America’s waning global power and influence and to symbolize the failures and frustrations of the Carter administration. Brzezinski, during the early months of 1980, became convinced that negotiations to free the kidnapped Americans were going nowhere. Supported by the Pentagon, he began to push for military action.

Carter was desperate to end the standoff and, over Vance’s objections, agreed to a long-shot plan to rescue the hostages. The mission, dubbed Desert One, was a complete military and political humiliation and precipitated Vance’s resignation. Carter lost his re-election bid against Ronald Reagan that November.

Brzezinski went on to ruffle the feathers of Washington’s power elite with his 1983 book, “Power and Principle,” which was hailed and reviled as a kiss-and-tell memoir.

“I have never believed in flattery or lying as a way of making it,” he told The Washington Post that year. “I have made it on my own terms.”

The oldest son of Polish diplomat Tadeus Brzezinski, Zbigniew was born on March 28, 1928, and attended Catholic schools during the time his father was posted in France and Germany.

The family went to Montreal in 1938 when the elder Brzezinski was appointed Polish consul general. When Communists took power in Poland six years later, he retired and moved his family to a farm in the Canadian countryside. 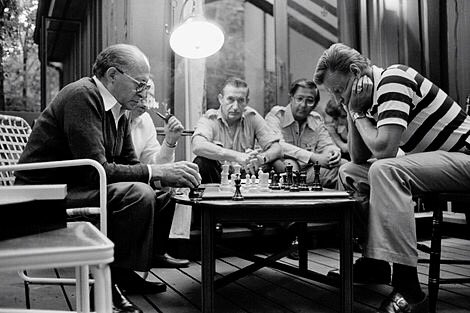 This is one of my favorite photos of Dr. Brzezinski playing chess with PM Begin at Camp David. It captures him well. @zbig

At his new home, the young Brzezinski began learning Russian from a nearby farmer and was soon bitten by the foreign policy bug.

Brzezinski’s climb to the top of the foreign policy community began at Canada’s McGill University, where he earned degrees in economics and political science. Later at Harvard, he received a doctorate in government, a fellowship and a publishing contract — for his thesis on Soviet purges as a permanent feature of totalitarianism.

Frequent trips to Eastern Europe and several books and articles in the 1950s established Brzezinski as an expert on Communism, and by the 1960s he’d begun to attract the interest of policymakers. Throughout his career, he would be affiliated with moderate-to-liberal groups, including the Rand Corp., the Council on Foreign Relations, Amnesty International and the NAACP.