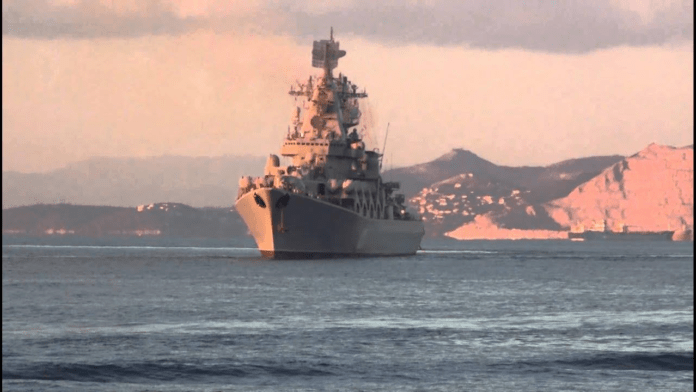 Analysis. By GIS/Defense & Foreign Affairs Staff, with input from our Kyiv correspondent.

I he ongoing Russia-Ukraine war — even as part of a much larger strategic conflict — has already begun to yield significant lessons for statecraft and military operations. [I]

The conflict was far from resolved during April 2022.But regardless of the completion of that military phase, profound and durable changes had been caused to the global architecture.

US Pres. Joe Biden, while ramping up support for Ukraine, said that the US would not in­terfere with a Russian attempt to militarily resolve its problems with Kyiv. Then Washing­ton kept insisting that Russia was in the process of a “full-scale invasion”. The war had not, even by mid-April 2022, reached the level of a “full-scale invasion”, as dramatic as the imagery of this (or any other) war may be.1

The result was that when Moscow took the bait, Washington was able to irrevocably di­vide the world once again into two camps, with Russia forced into an alliance with the People’s Republic of China (PRC) and Iran. This will have long-term negative conse­quences for Russia, as well as for the West (including the US), but has saved the Com­munist Party of China (CPC), which now has long-term stability in food and energy sup­ply from Russia.“

For those who still cannot comprehend why Vladimir Putin took the bait, the important question should be asked as to why, strategically, Joe Biden offered it. So, even if motive cannot be immediately understood, the best course of action is to reject such tempta­tions.

Russia by mid-April 2022 was close to achieving its goals of securing the defense of Cri­mea, consolidating and expanding the territorial control of the entire once-Russian area of Donbas (Luhansk and Donetsk), and possibly acquiring a coastal land corridor be­tween the Donbas and Crimea (therefore securing total domination of the Sea of Azov and the surrounding resource regions), while ensuring that post-conflict Ukraine would not be a partner in NATO. The grand strategic cost of the campaign however proved that Moscow may achieve a pyrhhic victory.

What was clear was, however, the reality that the capabilities of unmanned aerial vehicles in an offensive role had still far from peaked, and that — as Ukraine demonstrated on April 13, 2022 — shore-based anti-shipping missiles, coupled with reconnaissance and electronic warfare assistance from UAVs (Turldsh-built Bayraktar TB-2) were difficult to detect and deter. This is a key lesson for those contemplating operations in, say, the Red Sea, Persian Gulf/Arabian Sea (Strait of Hormuz), and South and East China seas regions. Significantly, Iran has Ukrainian- sourced anti-shipping cruise missile batteries on its coastline; Vietnam and the Philippines have acquired Indo-Russian superson­ic BrahMos anti-shipping batteries.

Significantly, although the Moskva was extensively modernized since its initial delivery in 1979, and was operated by an experienced crew, it clearly was functioning too close to the Ukraine coastline, possibly to avoid being in international waters with the possibility of contact with foreign warships, and was insufficiently prepared for a mass EW assault on its sensors. Ironically, the ship had been presented with what was purported to be a frag­ment of the Cross of Jesus Christ, and this holy relic was kept aboard as a blessing and a token of good luck. It had cost the donor a reported $40-million. There was no immedi­ate news as to whether the relic had been saved.

All 510 crew aboard Moskva were, however, saved, but the loss of the Russian Black Sea Fleet flagship — the largest warship to be lost in combat since World War II (the other capital ship loss was the Argentine Navy light cruiser, Belgrano, 12,242 tons (full load disp.), lost in 1982 — was a severe political blow for Russia.

This report noted, among other lessons, that “Russia demonstrated that strategic nuclear doctrine could be updated in a way which permitted a very large spectrum of conventional warfare beneath a nuclear threshold. Instead of the First Cold War doctrine that conventional direct military contact between nu­clear powers would act as a tripwire guaranteeing escalation to nuclear contact, the Russians used the threat of nuclear escalation to enable a high degree of conventional military warfare with the denial of access to that war by foreign forces supporting Ukraine. This was a reversal of First Cold War practice, and showed new utility in the deterrent and prestige realities of nuclear weapons.”

[I]  Anything your adversary (a) wants you to do, (b) goads you to do, (c) offers to you as a gift, or (c) says you will do is almost certainly something you do not want to do.

Russian Pres. Vladimir Putin took the bait on ail four counts in deciding to attack Ukraine. The US Government had, since late 2021, insisted that Russia was about to in­vade Ukraine, at a time when Moscow had no plans to do so (even though it had increas­ingly used the threat of force to keep Ukraine out of NATO). Then, on January 25, 2022,