The escalating crisis between Turkey and the Netherlands is a startling example of how this year’s crucial election campaigns can flare into international incidents. The Dutch go to the polls this Wednesday for a parliamentary election seen as a bellwether for Europe’s political future, and all eyes are focused on far-right, Euroskeptic, anti-Islam populist Geert Wilders. Meanwhile, Turkey will hold a referendum next month on constitutional revisions that would scrap the country’s parliamentary system in favor of an executive presidency under the  powerful President Recep Tayyip Erdogan. In their electoral bids, Erdogan and Wilders have found useful bogeymen in one another’s nations.

“The explanation for the Dutch-Turkish ‘crisis’ this weekend is pretty straightforward,” wrote Dutch political scientist Cas Mudde in a message to Today’s WorldView. “Both countries are currently engulfed in electoral campaigns that are dominated by authoritarian nativism.”

The drama started after two Turkish ministers were blocked from attending rallies in the Netherlands. The votes of the sizable Turkish diaspora in northern Europe may be key for Erdogan’s cause, and his loyalists were scheduled to hit the campaign trail in various European cities. Concerned about such rallies taking place so close to their own election day, the Dutch government barred Turkish Foreign Minister Mevlut Cavusoglu from landing in the Netherlands on Saturday.

When Betul Sayan Kaya, the Turkish minister for families, traveled by car from Germany to the Dutch city of Rotterdam, she was stopped by police outside the city’s Turkish consulate and barred from entering the building as crowds of Dutch Turks began to rally around the area. She was eventually given a police escort to the German border and flew back to Turkey in a private jet.

We’re not allowed to enter into our Consulate which is part of our homeland.Is this really the heart of Europe ot the cradle of civilization

The scenes in Rotterdam fanned anger in both countries. Wilders, who anchors his politics in a rejection of Islam and Muslim immigration, mocked the protesters as anti-Dutch. “The Netherlands can see that these people are Turks, not Dutch. They have Dutch passports, but they don’t belong here,” he tweeted. He also jeered Kaya:

Go away and never come back @drbetulsayan and take all your Turkish fans from The Netherlands with you please. #byebyehttps://twitter.com/drbetulsayan/status/840693227242045440 …

Turkish officials condemned the Dutch government’s actions as “fascism” and argued that Dutch Prime Minister Mark Rutte, a center-right politician who is seeking to head off the challenge posed by Wilders, was pandering to bigotry.

Tensions between Turkey and the European Union have been simmering for the past couple of years, with the two sides clashing over  the Syrian refugee crisis and Europe’s supposed coddling of Kurdish separatists. In his polemics, Erdogan routinely nurtures a sense of grievance over Western hypocrisy and meddling.

“The West has thrown off its mask in the past days,” Erdogan said at a Sunday rally in Istanbul. “What we have seen is a clear manifestation of Islamophobia. I have said that I had thought Nazism was over, but that I was wrong. Nazism is alive in the West.” Erdogan had also hurled such accusations at Germany when its authorities decided to block certain Turkish rallies.

1/Shame on the Dutch government for succumbing to anti-Islam racists and fascists, and damaging long-standing Turkey-NL relations.

2/National elections in the Netherlands are in a few days. Last night we found out that Geert Wilders was already in power.

3/ The decision by the Dutch Govt to ban Turkish ministers and use force against peaceful citizens mark a dark day for democracy in Europe.

The spat may spiral even further: Turkish officials have promised retribution and may block the Dutch ambassador in Ankara, currently on leave, from returning. “Our Dutch counterparts have been told that this grave decision taken against Turkey and the Turkish community in the Netherlands will bear serious consequences in the diplomatic, political, economic and other fields of our relations,” read an emailed statement from Turkey’s Foreign Ministry.

Some pro-Erdogan protesters even gathered together and squeezed oranges — a reference to the Dutch — in symbolic fury and drank the juice.

“We’ve ended up in a bad movie,” Rutte complained. “The Turks have ramped this up themselves.”

Ahead of the elections, the Dutch prime minister has toed a tougher line on immigration, arguing that some Dutch Muslims have to work harder to integrate into Dutch society. He even published a full-page newspaper ad that warned migrants to “be normal or be gone.” Such rhetoric has seen Rutte claw ahead of Wilders and his far-right Party for Freedom in opinion polls, which had Wilders in the lead. (Wilders’s extremist politics and the fragmentation of the Dutch vote mean he’ll likely stay in the opposition even if his party wins first place.)

Ironically, although Turkish authorities comment angrily about the suppression of peaceful, democratic Turkish assemblies, critics contend that Erdogan’s referendum is a method for entrenching his authoritarian rule. After a failed coup attempt against Erdogan last summer, the Turkish government embarked on a widespread purge of the country’s bureaucracy and civil society. The dismembering of Turkey’s parliamentary system is seen as another dangerous step in the unraveling of democracy under Erdogan’s watch.

Still, there’s no guarantee that Erdogan’s “yes” camp will win — Turkish opinion polls, such as they are, suggest a neck-and-neck contest, with the country’s embittered and oft-divided opposition rallying against the president. So Erdogan, a moderate Islamist, is drawing from his time-tested nationalist playbook to win votes. One Turkish dissident tweeted a cartoon summing it all up: 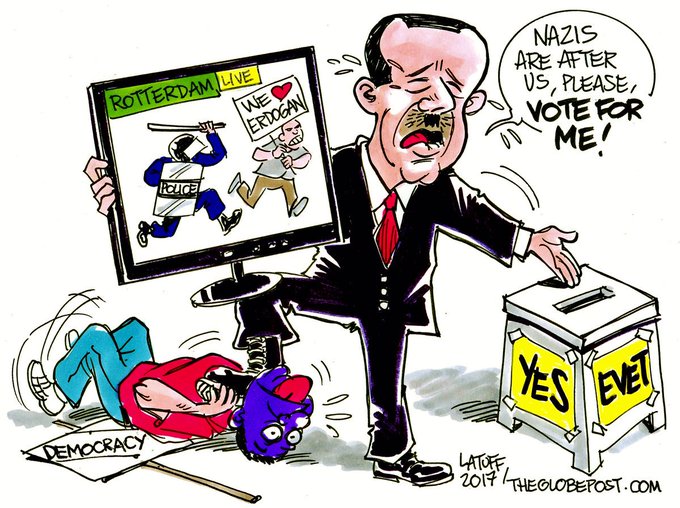 I have been trying to explain how the row with the Dutch gives a boost to Erdogan, but this @TGlobePost cartoon says it all.

The irony, of course, is that Wilders can point to the same incidents over the weekend and also hope for an electoral boost. The far-right politician has long inveighed against Erdogan — whom he calls a “dictator” — and the European leaders who supposedly appease him. Last week, Wilders staged a brief demonstration outside the Turkish embassy in The Hague, campaigning against the Turkish foreign minister’s visit. He stood in front of a banner that read: “Stay Away! This is our country.”

“When society is prompted to hate Muslims with xenophobic arguments, eventually they start to hate all ‘others,’ want more restrictions, more walls and more protectionism,” a Turkish columnist said in the Daily Sabah, a staunchly pro-Erdogan newspaper. “And that will bring the end of the union the Europeans spent decades building and establishing.”

That conclusion happens to be music to the ears of Wilders and his far-right supporters.