Russia to Install and Man Air Defenses Inside Turkey, Close to NATO Bases 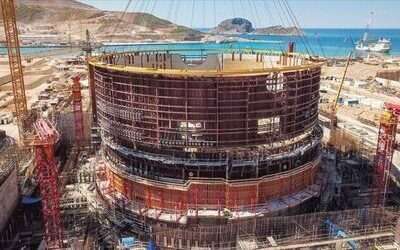 This is an abbreviated version of an article published originally under the title “Russia to Install Radar and Missile Systems Close to Critical NATO facilities in Turkey, Prompting Security Concerns.”

Documents referenced in this article are available in the original Nordic Monitor version.

Russian plans to install radar and missile systems in a Turkish town located some 280 miles from a critical NATO radar base as part of an agreement to build a 4,500-MW capacity nuclear power plant in Turkey has prompted an outcry and security concerns from the opposition.

“The installation of a radar system also means the establishment of an air defense system. In other words, have you given permission for the construction of a nuclear power plant that we can’t protect ourselves? How and on what basis will the software for this system, which will be left entirely to the Russians, distinguish between friend and foe?” asked opposition lawmaker Zeki Hakan Sıdalı during a debate in parliament on October 26.

The agreement was originally signed as an intergovernmental deal between the two countries in May 2010, but numerous concessions to Russia were made by Turkish President Recep Tayyip Erdoğan, who issued hastily drafted decrees and rushed laws through parliament to please the Kremlin.

As the terms of the agreement became clearer with the construction of the plant, it turned out that Russia would be installing a radar system near the plant and possibly deploying long-range missiles such as S-400s on the pretext of providing security for the nuclear installation.

There is no explicit reference in either the bilateral agreement or the regulations adopted in Turkey since 2010 to permission granted for such systems other than general provisions on establishing Central Alarm Systems (MAI) for security in and around the power plant.

The detailed regulations issued by Turkey’s Nuclear Regulatory Authority (Nükleer Düzenleme Kurumu, NDK) on August 8, 2020 on the security of the nuclear installation and materials made no mention of radar or missile systems, either.

The issue has been hotly debated in the Turkish parliament, and a legal challenge was filed in a Turkish court to stop the Russian-controlled Turkish company from proceeding with the construction as planned.

“You are bringing an atomic bomb to Akkuyu and handing the button to Putin and the Kremlin,” said opposition lawmaker Serkan Topal.

“You are bringing an atomic bomb to Akkuyu [the town where the power plant is being built] and handing the button to Putin and the Kremlin,” said opposition lawmaker Serkan Topal.

Akkuyu lies on the eastern Mediterranean coast, not far from a sophisticated radar base in Malatya’s Kürecik district, part of NATO’s missile defense system, which works with missile interceptors in Romania and Poland to counter a missile threat. What kind of radar and air defense systems the Russians plan to bring to Akkuyu and whether they would compromise the security of Turkey and its NATO allies is an open question.

The government of President Recep Tayyip Erdoğan has not been forthcoming with details of the plant construction, which is estimated to cost some $20-$22 billion. The entire process has lacked transparency and is shrouded in secrecy. The government has also been unresponsive to opposition criticism on a range of issues from national security concerns to further dependence to Russia for energy supplies, from flawed environmental impact study reports to overpriced electricity purchase guarantees that many suspect are designed to enrich the cronies of President Erdoğan.

The Russians appear to be making up their own rules as they move forward with their plans with respect to the power plant construction. Akkuyu NGS Nuclear Santral A.Ş, the company set up in Turkey by Russia to manage the plant and oversee the construction, was sued in a Turkish court by the sole Turkish board member, Hasan Cüneyt Zapsu, who claimed that the Russian-dominated board left him in the dark and did not include him in the decision-making process.

Zapsu, a long-time ally of President Erdoğan, stated that the radar installation could possibly pose a national security risk to Turkey and may not be aligned with Turkish foreign policy. He told the board that the company needed to talk to Turkish authorities before awarding a contract to a Russian firm, but he was ignored and the Russians on the board simply made a decision on June 6, 2021 and asked him to rubber-stamp it, something that has been going on for some time.

The Erdoğan government has been doing everything in its power to suppress criticism and hide from the public the details of the problems in the construction of the plant.

Compounding matters further, the Erdoğan government has been doing everything in its power to suppress criticism and hide from the public the details of the problems in the construction of the plant.

A parliamentary motion filed by the main opposition Republican People’s Party (CHP) on October 24, 2022 asked the legislature to establish an investigation commission to probe security issues for the radar system to be built by Russia in Akkuyu.

Despite warnings by the opposition that a radar base could compromise Turkey’s national security and violate its sovereignty, the motion was defeated in the General Assembly on October 26 by a majority of votes from Erdoğan’s ruling Justice and Development Party (AKP) and its far-right backers from the Nationalist Movement Party (MHP).

However, the debate provided further details on some of the disputes over the Akkuyu project. According to Zapsu’s lawsuit, filed at the Ankara 9th Court of Commerce under case file No.2022/655, he was sidelined from the decision making process of Akkuyu NGS, which is building the power plant and will be operating it when it goes on line.

For this project, the Russians established a special Turkish firm in Ankara under the name of Akkuyu NGS Elektrik Üretim A.Ş. on December 13, 2010 with an initial capital of 150 million Turkish lira. All five founding members and shareholders were Russian companies, listed as Atomstroyexport, Inter Rao Ues, Konzern Rosenergoatom, Atomtechenergo and Atomenergoremont. All the board members were Russian nationals. In November 2013 Erdoğan’s confidant Zapsu was brought on as a member of the board.

With the last changes reported to the Trade Registry at the end of 2021, the board of directors is composed of Anastasia Zoteeva (president), Anton Dedusenko (deputy president), Ekaterina Lyakhova, Hemi Edouard Proglio, Gennady Sakharov, Alexey Zhukov, Zapsu and Sergey Zvegintsev.

Russia reportedly extracted major concessions from Erdoğan on a number issues such as using Turkey to circumvent Western sanctions and provide sanctuary for oligarchs hunted by the West. More importantly, the Russians secured the commitment of Erdoğan to not challenge changes approved by the board of directors of Akkuyu NGS at a board meeting on March 12, 2019. The changes, which were not part of the original deal that was approved by the Turkish parliament, paved the way for Russia to expand its footprint in the port of Mersin and its maritime facilities in the Mediterranean.

Russia acquired rights to build commercial ports that can be used as a forwarding base to meet the logistical needs of Russian naval vessels in the Mediterranean.

According to the original deal, Akkuyu NGS has the right to build, manage and use port facilities for transport, storage and loading and offloading of materials needed for the power plant. However, with the new changes introduced by the board, Russia also acquired rights to build commercial ports that can be used as a forwarding base to meet the logistical needs of Russian naval vessels in the Mediterranean. Erdoğan reportedly pledged not to challenge these plans even though they were not approved by parliament.

To sweeten the deal, Putin reportedly promised Erdoğan help in the elections next year that will put Erdoğan’s 20-year rule to the test amid growing the economic hardship Turkish voters are suffering. Proposals ranging from Russian influence operations to promote Erdoğan during the election campaign to offering discounts on the price of energy Turkey purchases from Russia were brought to table during the talks.

In any case, the fallout from problems with Turkey’s first nuclear power plant continue to trigger political debate in Turkey, and Russia’s deep involvement in the project may very well have repercussions in terms of security concerns among Turkey’s NATO allies.