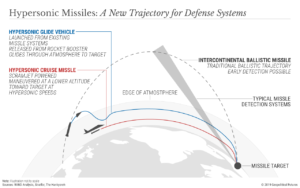 Hypersonics could introduce a radically new type of war.

The media has been filled with stories recently about Chinese and Russian hypersonic missiles and how these weapons are changing the military balance of power. The U.S. Department of Defense has said it is struggling to keep up with the Chinese and Russian programs. The United States, however, has been working on developing hypersonic missiles since the 1990s; I even wrote an entire chapter in my 1996 book “The Future of War” on the U.S. hypersonics program. In the time since, it’s hard to believe that the U.S. has made little progress on this program, while the Chinese and Russians have surged ahead. Nonetheless, it’s possible that the U.S. has dropped the ball here. It’s also possible that the Defense Department is using this issue to leverage more money out of Congress while obscuring the progress it has made. The Chinese and Russians, meanwhile, are looking for any means to appear powerful and intimidating. But regardless of whether the U.S. has actually fallen behind on this matter, the real question is why hypersonic missiles are an important evolution in the first place.
How Do Hypersonics Work?

First, we need to begin by defining hypersonics. Hypersonic weapons are missiles that are able to travel more than five times the speed of sound and penetrate anti-missile defenses. There are two types of hypersonic weapons. The first is a two-stage system in which a group of hypersonic missiles are launched in what is called a glidecraft to extremely high altitude or into space. The craft then releases the projectiles to strike at predetermined targets moving at very high speeds. Recently developed glide systems involve hypersonic missiles that, once released, can execute dramatic maneuvers to evade anti-missile defenses. They are designed for a global strike capability and are usually conceived of as nuclear missiles.

The second type of hypersonic weapon has a much shorter range, is launched from more conventional platforms (such as planes, ships and land-based launchers) and was designed to render conventional defenses impractical. The Chinese, for example, have developed hypersonic missiles that can strike U.S. ships or fleets in or near the South China Sea.

These two types of weapons have to be treated separately. The Russians, for example, have thousands of nuclear intercontinental ballistic missiles, which are classified as hypersonic simply because of their speed, that are able to strike the United States in less than 30 minutes. But Russia is afraid that evolving U.S. ICBM defenses will render these missiles obsolete. It’s therefore developing a nuclear-capable hypersonic missile able to get through these defenses because of their speed and maneuverability. In doing so, the Russians are trying to preserve their nuclear capability. It’s not impossible that the U.S. could build an anti-missile system able to block an attack by thousands of Russian ICBMs, but it’s doubtful that it could block all of them. And even a tiny fraction of the missiles penetrating U.S. defenses would devastate the United States. I doubt that the Russians are really afraid of losing their deterrence capability with ICBMs. Rather they are on their way to developing other weapons, while hoping to force U.S. defense planning in a different direction.

China’s anti-ship hypersonic missiles have a more significant purpose. China regards the seas to its east as essential to its national security, and the presence of the U.S. Navy in those waters is a threat the Chinese can’t ignore. But China can’t drive the U.S. farther east with conventional weapons, since U.S. defensive systems would be able to withstand any Chinese attack and a U.S. retaliation would be harsh. But the mere existence of hypersonic weapons that U.S. defenses could not block would force the fleet to go farther east and out of range.

But the Chinese missiles have a crucial weakens. That weakness is knowing the rough location of the targeted vessel. Even if the missile had a terminal guidance system and could maneuver at extremely high speeds and temperatures, it would need detailed information on location. Conventional Chinese reconnaissance aircraft would have difficulty surviving inside the U.S. air defense envelope. Unmanned aerial vehicles would also have difficulty surviving and would be subject to electronic warfare interfering with its transmissions to the missile’s base or spoofing its signal. In such an attack, the probability of success must be much higher than UAVs can likely provide.

The attacker, therefore, must rely on satellite surveillance, and this means that at first indication of war, the U.S. would have to attack Chinese satellites. The Chinese would have to accompany their first strike with a simultaneous attack on U.S. satellites to clear the way for a sustained assault on the U.S. fleet or its defenses. In other words, the existence of the hypersonic missile by itself is not the real threat; space-based reconnaissance is.
A New Type of War

Hypersonics, then, represent much more than a minor evolution in the basic paradigm of naval warfare. Rather, they introduce a radically new type of war in which control of low Earth orbit would determine the outcome of the conflict by enabling missiles. It’s hard to imagine how a war threat from hypersonics able to penetrate the U.S. fleet wouldn’t result in either a U.S. concession or an unprecedented space war. Another issue is detecting the location of launch pads that boost satellites into orbit. After assaulting reconnaissance satellites, the next step is to assure that no replacements are launched. The key to that is to disable the launch facility through a missile attack, assuming that all launch pads are identified and that mobile satellite launchers don’t exist.

There’s another problem with hypersonic cruise missiles. The number of explosives they can carry is limited. A U.S. Tomahawk missile can carry a warhead weighing just over 1,000 pounds. Most data I’ve seen on hypersonics indicates they carry warheads of a similar size. That can cause a lot of damage, but its ability to sink a large vessel is limited. A large number of cruise missiles would be needed to at least render a ship inoperative, and that would decrease the possibility of a surprise attack.

As currently configured, cruise missiles have a very high potential of entering a war at a nuclear level or of creating such uncertainty of the impact that it forces extreme measures. And in moving to that level, the initiator can’t assume they will be the winner.

In the 1990s, I saw cruise missiles as alternatives to deploying platforms like tanks and artillery thousands of miles away. As we saw in Operation Desert Storm or Operation Iraqi Freedom, it can take the U.S. six months to deploy in Eurasia, during which time an enemy could reshape the region. Sending 50-ton tanks 5,000 miles to hurl a projectile two miles away seemed to me irrational. Hypersonics would allow U.S. missiles to reach a target in the Eastern Hemisphere within 15 minutes; the U.S. could engage tactically within hours or days, rather than months, and avoid logistical problems.

There were many problems in the 1990s to overcome. There were no materials that could withstand the heat. There was no engine that could provide the speed and the range. The limited power of explosives made each mission of limited value. And the cost would be astronomical. But since then, I assume the U.S. has had a revolution in material science, perfected its scramjet capability, which drives a hypersonic missile, and developed a new generation of explosives. In my view, a U.S. capability of this sort would have reduced the threat of conflict. In the form that it has evolved, it has reduced the threat by increasing the consequence, continuing the trend that has been in place since World War I.