How the European Union is betraying the Western Balkans 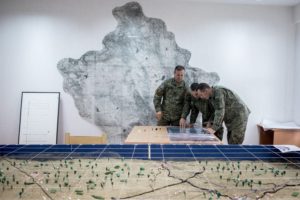 The Washington Post
Officers from the Kosovo Security Force take part in an advance mapping class in Ferizaj, Kosovo, on May 6. A recent EU-backed summit failed to restart negotiations between leaders from Kosovo and Serbia over a final resolution of Kosovo’s sovereignty. (Chris McGrath/Getty Images)
By Jasmin Mujanovic

Jasmin Mujanovic, a political scientist specializing in the politics of southeastern Europe, is the author of “Hunger and Fury: The Crisis of Democracy in the Balkans.”

The European Union is on the precipice of a major crisis, one rooted as much in the incompetence of the Brussels establishment as in the cynicism and provincialism of the member states. It is a story of hubris and betrayal, of broken promises and cowardice, a story about the “triumph of the lack of will.”

For the past 16 years, Brussels has been promising the states of the Western Balkans, the continent’s most vulnerable and volatile region, that “the future of the Balkans is in the European Union.” Over the past year, however, Brussels has pivoted sharply and all but completely snuffed outthe idea of further enlargement.

As member states embark on the European Parliament elections, enlargement has disappeared from the agenda. In 2018, the European Commission grudgingly floated the idea of 2025 as the next earliest possible date for a new round of enlargement. But in Paris, Emmanuel Macron is explicit: There will be no enlargement, at least not in the foreseeable future. Even in Berlin, long the most outspoken European champion of the Western Balkans, the idea of further E.U. expansion has become politically toxic.

To be clear, no one claimed the remaining non-E.U. states of the region — Bosnia, Montenegro, Serbia, Kosovo, North Macedonia and Albania — were likely candidates for membership in the near future. But the promise of a “European perspective” was an integral part of Brussels’s strategy for keeping the Western Balkans on the path of political and economic reform, and keeping its geopolitical rivals — Russia, China, Turkey and the Persian Gulf monarchies — at bay.

This jarring turn could not come at a worse moment. It was only in January that Skopje and Athens finalized their nearly three-decade-old dispute over the “Macedonian name issue.” That breakthrough came on the back of a dramatic civil-society-led revolution in what is now North Macedonia that toppled a hard-line nationalist-authoritarian regime and nearly plunged the country into renewed civil war.

The Macedonians were led to believe by European diplomats that swallowing this bitter pill — changing the name of their country — would mean an accelerated path to E.U. and NATO membership. The latter appears secured, but even the idea of E.U. membership — the big prize for most ordinary people in the region — is increasingly unlikely.

More simply, the E.U. lied, and governments and peoples across the region are livid.

Member states such as France stress that the region is just not ready for membership in the premier political and economic bloc in the world. But this is not new information. And it is not a plan for countering the growing din of rage and indignation reverberating down the spine of the Balkans.

The apparent success of E.U. integration in the former Warsaw Pact countries offers a tantalizing precedent. Yet the Western Balkans are not the same as Eastern Europe. While Eastern Europe lived through decades of authoritarianism, the continent’s southeast saw both decades of one-party rule and then a series of regional and internal conflicts that resulted in the deaths of approximately 150,000 people between 1991 and 2001.

In short, the kind of state-building and democracy promotion the Western Balkans needed was granular, patient and sustained. What the region received instead was the E.U.’s accession model: a technically rigorous but politically ineffectual program. This approach allowed post-communist elites from the Baltic to the Adriatic to make cosmetic legislative changes without ever actually dismantling their vast patronage networks, severing their ties to organized crime or tackling corruption in any meaningful sense.

The result has been the worst of all worlds. The old guard in Western Europe says it is disturbed by the alarming democratic backsliding in the continent’s (south)east. But mostly its members fear the rise of a homegrown far right that points to the Balkans as precisely the kind of alien other — thanks to its large indigenous Muslim populations — that must be kept away.

In the region itself, one portion of the illiberal elite establishment is seizing the opportunity to shift allegiances toward new, autocratic patrons in Moscow, Beijing and Ankara. Another set, like Bosnia’s secessionist Serb nationalist strongman Milorad Dodik, is rebooting ’90s-style political adventurism or peddling megalomaniacal partition schemes.

If the Western Balkans genuinely slips away from the Euro-Atlantic community, European leaders will have only themselves to blame. Fully severed from the promise of integration, Balkan politics will quickly become desperate and dangerous — especially for the E.U. itself.

The E.U. can still reverse course. It must formally begin membership negotiations with North Macedonia and Albania and at least grant Bosnia candidate status. That will momentarily stabilize the ship. The big task, however, is creating a sustainable, long-term plan for the region that will entail not only a credible commitment to liberal-democratic norms and practices but also a hard-power deterrent against the likes of Russia.

Simply saying “no” to the Western Balkans might play well with segments of the Europe’s increasingly nativist electorate, but it’s not a strategy. It’s merely a crisis delayed.