“2023 is the beginning of the Century of Türkiye” 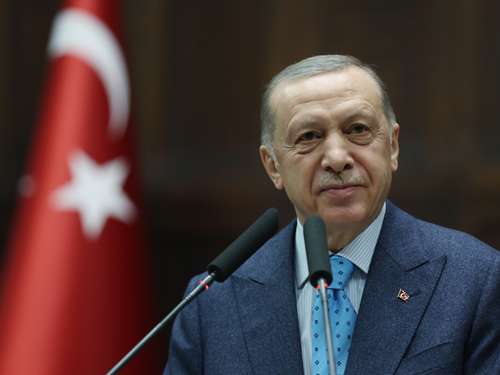 Addressing AK Party’s parliamentary group meeting, President Erdoğan said: “To us, 2023 is both the symbol of our 20-year-long politics of projects and services, and the beginning of the Century of Türkiye, our new vision.”

President and Justice and Development (AK) Party Chairman Recep Tayyip Erdoğan made a speech at the party’s parliamentary group meeting.

“THE NUMBER OF PROJECTS IN DEFENSE INDUSTRY HAS INCREASED TO 750”

“Thanks be to Allah, we have achieved to a great extent the goals we want to introduce in our country and make our nation enjoy in the centenary of our Republic,” President Erdoğan stated, and said: “Although global crises as well as the grave attacks our country has been exposed to over the past decade are causing a delay in some of the areas, these are not the kind of issues that would undermine the magnitude of our achievements. To us, 2023 is both the symbol of our 20-year-long politics of projects and services, and the beginning of the Century of Türkiye, our new vision.”

Drawing attention to Türkiye’s moves in defense industry, President Erdoğan said: “Over the past two decades, we have increased the number of projects in defense industry from 62 to 750, and the budget of those projects from 5.5 billion dollars to 75 billion dollars, including the ones that are still in the tender process.” President Erdoğan also pointed out that the number of the firms in the sector, which was once 56, had increased to over 2,700.

“WE HAVE GRADUALLY STRENGTHENED OUR DEFENSE INDUSTRY”

Stating that the goods exports, which had been under 250 million dollars previously, had now increased to some 4.5 billion dollars, with the domestic production rate increasing from 20 per cent to some 80 per cent, President Erdoğan said that they were proud of achieving this. “Despite numerous attempts of sabotage, negligence and betray both from outside and inside, we have gradually grown bigger and strengthened our defense industry.”

Touching upon the defense industry products of Baykar, President Erdoğan said Bayraktar TB2s had achieved successes in many parts of the world, form Syria to Karabakh, from Libya to Ukraine, and that songs had been composed for Bayraktar TB2 in many countries.

Pointing to the 2023 elections in Türkiye, President Erdoğan said: “The late Menderes had said, ‘Enough! The people will have a say from now on,’ on May 14, 1950, and won both the hearts of the nation and a landslide victory in the elections. In the similar vein, the late Özal, with his promise ‘to enable Türkiye to make a leap forward’, won an important victory in the elections held in the shadow of the coup. And we, by saying, ‘Nothing will remain the same anymore’, had taken office with the great support of our nation. And today, we ask for our nation’s support in 2023 by saying, ‘Enough! It is the nation’s say, decision and future.’ Despite those tutelage clappers who do not want to leave the say, the decision and the right to determine their future to the nation, we will launch the Century of Türkiye. Our nation will say, ‘Enough!’ once again after 73 years on the very same day to those coup clappers, those incompetent greedy people, those colonialism applauders who have emerged as the table of six.”