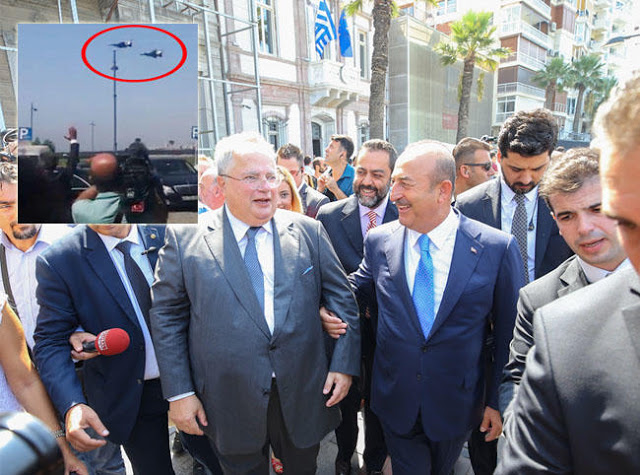 The meeting between the foreign ministers of Turkey and Greece was briefly interrupted on Sept. 4 when low flying Turkish acrobatic jets surprised the Greek minister, who was calmed down by his Turkish counterpart. During the press conference, noise from the low flying Solo Türk acrobatic jets filled the room at one moment. When the Greek minister anxiously pointed to the sky, Çavuşoğlu calmed him down with a smile, telling him there was nothing to worry about. Solo Türk jets were in a test flight ahead of their upcoming show for the 96th anniversary of İzmir’s liberation from the Greek invasion in the aftermath of World War I.

Τurkey and Greece have pledged to develop bilateral ties through dialogue and cooperation despite disputes that need to be resolved, the foreign ministries of the two countries have said.

Turkish Foreign Minister Mevlüt Çavuşoğlu and his Greek counterpart Nikos Kotzias inaugurated the renovated Greek Consulate General in the western province of İzmir on Sept. 4.
The consulate in İzmir was closed in 2003 for restoration works, but the process never finished due to the Greek economic crisis in the last decade.
“Turkey and Greece represent two big civilizations rich in history and geography. We carry the richness and traces of these two big civilizations together. Both our countries are home to scores of cultural heritages,” Çavuşoğlu said.
Cooperation and dialogue are regarded as the fundamental constituent in Turkey’s relations with Greece, he stressed.
“As Nikos said, there are issues we disagree on. We have sometimes experienced stormy weather. But at the end of the day commonsense prevails as the two sides regard cooperation and dialogue as the fundamental constituent of our ties,” the Turkish minister said.
Citing growing economic and trade ties between the two neighbors, Çavuşoğlu offered his counterpart to accelerate works to launch a ferry line between İzmir and the Greek city of Thessaloniki.
Referring to Greece’s decision to provide legal protection to eight Turkish troops who fled to Greece after taking part in the July 2016 coup attempt, Çavuşoğlu said: “Turkey never harbors traitors of Greece on its soil. It is home only to the friends of Greece.”
Consulate symbol of a new beginning
For his part, the Greek foreign minister described the inauguration of the new building of the consulate general as the symbol of a new beginning in ties despite some bilateral problems.
“We are working with Mr. Çavuşoğlu to better our relations. We are also working on Turkey’s EU orientation. Two big leaders are in power in our countries. They are capable of resolving current problems based on international law,” he said.
Greece stood against coup plotters
The Greek top diplomat recalled that Greece has always stood by Turkey against coup plotters, saying Greece never “harbored terrorists.”
“We do not host them. What is always the case in our country is the implementation of the legal processes and international legal process. I believe our relations, our friendship and European vocation are also based on it,” he said.
https://twitter.com/HDNER/status/1036954532813594626
Share
Facebook
Twitter
Pinterest
WhatsApp
Linkedin
Viber