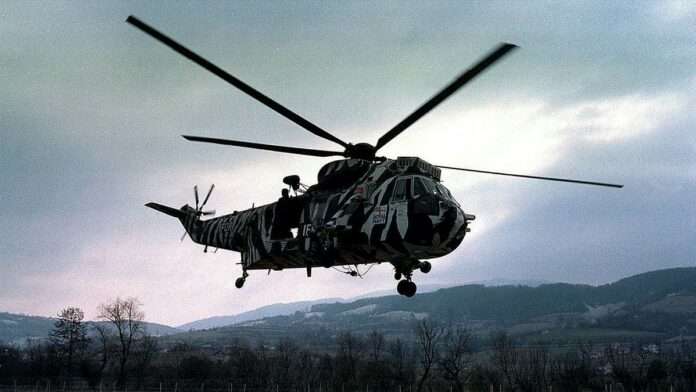 BELFAST — The UK today announced plans to send an additional 10,000 artillery rounds to Ukraine, while also announcing it has delivered a first second-hand search and rescue helicopter to its Eastern European partner

The decision to provide the ammunition was made by Ben Wallace, UK Secretary of Defense, during a visit to Norway where he is scheduled to host a meeting of the Northern Group of defense ministers, according to a Nov. 23 UK Ministry of Defense (MoD) statement.

Russia’s invasion, European security, and Sweden and Finland’s NATO membership applications are all due to be discussed during the multinational Northern Group meeting.

Alongside today’s SH-3 Sea King helicopter delivery, another two rotorcraft from London are expected to be transferred to Ukraine, reported the BBC. The UK’s Royal Navy conducted a six-week Sea King training course for 10 crews of the Ukrainian armed forces and engineers, added the MoD.

“The UK is also supplying winter kit to Ukraine’s troops as they continue to battle to liberate their country from Russian forces as winter rapidly approaches — when temperatures are known to sink to minus 20 degrees C [minus 4 degrees Fahrenheit] and below in parts of the country,” it explained.

Writing on Twitter on Nov. 22, Ukrainian President Volodymyr Zelensky said he had also received “another tranche” of financial aid from the European Union worth €2.5 billion ($3 billion) and awaits approval of a further €18 billion from the bloc in 2023.

Ukraine has recently been subjected to a devastating Russian missile campaign which has ripped through critical infrastructure and left approximately 10 million civilians without power. Such an offensive arrives while Russian stocks of 9K720 Iskander short range missiles said to be excessively low with just 119 left from an arsenal of 900 when the invasion started, according to figures shared on social media by Oleksii Reznikov, Ukraine’s minister of defense.

Boeing is embracing speed, agility and affordability to deliver the most digitally advanced, simply and efficiently produced, and intelligently supported products and capabilities to outpace the unprecedented threats and challenges of a fast-moving future battlespace.

In a new intelligence update, the UK MoD said on Nov. 23 that Russia “has likely” launched hundreds of Iranian UAV’s against Ukraine since September. “These have been a mixture of one way attack (OWA) UAVs and more traditional reusable armed systems,” said the MoD. Besides the targeting of military assets and electricity grids, London also estimated that Russian commanders “likely” prioritized Iranian UAV’s for medical facility strikes.