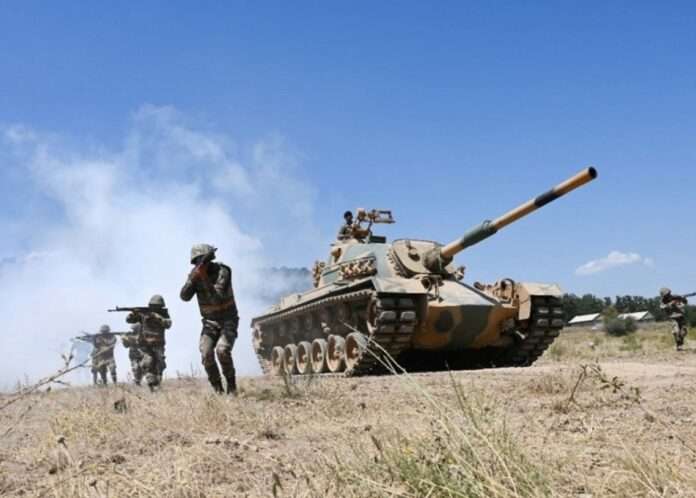 Turkish army tank and troops seen in a military exercise in August 2022.

The Turkish military’s main combat arm, the Land Forces (Kara Kuvvetleri), will have a hard time finding combat-ready troops to deploy in the event of a war and lacks much-needed military hardware to accomplish  its mission.

A confidential Turkish military report obtained by Nordic Monitor revealed that military commanders are concerned about the deteriorating capabilities of the Land Forces, proposing remedies to address the problems that hamper the forces’ operational and logistical capabilities.

“We are having a hard time finding a combat-ready armored/mechanized brigade that we can send into battle. So our top priority as the Land Forces should be to find a solution to our need for combat troops,” the report warned.

The report anticipated that the Land Forces may be called on to deploy, albeit in a limited engagement, and project power along the border with Greece as well as during a conflict between Azerbaijan and Armenia. It predicted that instability in Syria and Iraq would continue and that some troops may be committed to creating a buffer zone there.

It also noted that NATO may further weigh in on Russia and demand that Turkey commit forces at various levels against the Russian threat, while the army may be asked to provide training programs for more foreign countries.

Considering that the demand to use land troops would likely increase in the future in the projected security outlook, the Land Forces must be able to modernize itself quickly to address shortages and solve problems to be able to accomplish such tasks, the report underlined.

According to the report, the Land Forces is dealt a further blow with a lack of adequate manpower.

Turkish military report that details problems within the Land Forces:

“There is one fact that we can’t change. Conscripted soldiers do not meet the military needs of the Land Forces. It does not seem possible for this situation to change in the near, medium and long term,” the report said, adding, “On the contrary, the societal trends in the last twenty years, the shortening of the [obligatory] military service, which was done with political motives outside the involvement of the TAF [Turkish Armed Forces], and [introduction of] practices such as paid military service have worsened this outlook further.”

A significant part of the Land Forces is already committed to war-like engagements stemming from guarding the borders and the fight against terrorist groups, it noted. This hampers the army’s plans for restructuring and ties a significant number of troops to border patrol and counterterrorism operations.

It suggested that such tasks can be shifted to border police and law enforcement agencies such as the gendarmerie to free up troops for the Land Forces. Yet it warned that if such a shift were approved, the existing troops that were already committed to the fight against terrorism of deployed for border duty would most likely stay in their new units, thereby depriving the Land Forces of the manpower it needs.

The report admitted to the failure to complete the restructuring of troops in the Land Forces that was launched a decade ago, resulting in uncertainty among units and preventing needed investment in personnel and equipment. Small problems became huge issues when units that were the subject of debate for dissolution or restructuring hesitated to invest further to avoid waste.

The report proposed the overhaul of the 35 brigades the Land Forces has in addition to one stationed in the north of Cyprus. According to the proposal, 15 of these brigades – five commando brigades, four light armored brigades and six armored mechanized brigades — would be designed to be combat-ready at the highest level. They would be composed entirely of professional soldiers.

The commando brigades stationed in Bolu, Kayseri, Tunceli, Siirt and Hakkari were selected as targets in the report.

Another group of 15 brigades – four motorized and 11 armored mechanized units – would have the capability to be war-ready within one to three months. They would be manned by conscripts led by professional soldiers.

The rest of the brigades – five units — would be restructured to be mobilization brigades set to be ready for combat within three to six months. They would also be manned by conscripts.

The mobilization brigades would also serve as training hubs for foreign military personnel and help establish or restructure armies for countries such as Somalia and Libya that have requested assistance from Turkey. The report estimated that more countries would seek similar help from Turkey in the future, putting more strain on the Land Forces.

According to the report, the idea of downsizing in the army with enhanced effectiveness and professional capabilities did not really work out the way the planners anticipated. Instead, manpower was reduced without boosting the effectiveness of Land Forces units.

There is no date on the report, but it is believed to be from around 2015 since it mentions that some of the proposed changes would be submitted to the Supreme Military Council meeting in the summer of 2015. It was drafted at the Land Forces Command level.

It is not clear how many changes have been made to the Land Forces since then, but the report provided a close look at the thinking in the Land Forces, which launched reforms with the idea of converting itself into a professional army in the 1990s.

Some of the projections for the security outlook in the report were realized. The Turkish army was deployed in Syria to create a buffer zone and expanded its presence in Iraq, while a limited military engagement in Libya during the civil war and the Caucasus during the Azerbaijani-Armenia conflict took place.