The United States Looks to Build “Enduring Strength” in Ukraine 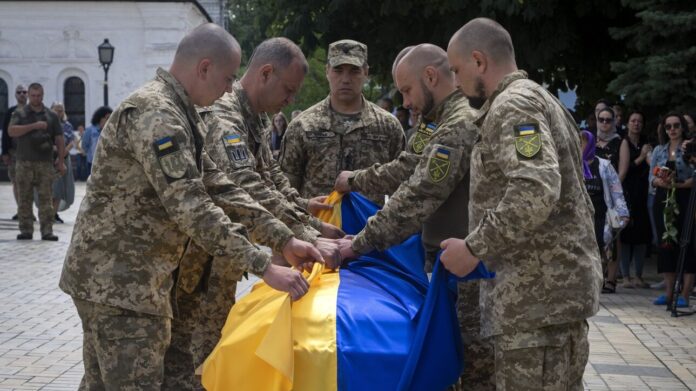 If the record-breaking $3 billion military aid package announced by the Biden administration on Wednesday to mark Ukraine’s Independence Day is any indication, U.S. support for Kyiv against Russia’s six-month-old full-scale invasion has entered a new phase: long-term planning.

In fact, the weapons deliveries—which will include six Norwegian-made air defense systems, nearly 250,000 rounds of 155mm artillery ammunition, and novel so-called Vampire systems that can shoot down Russian drones—will have to be contracted and provided from U.S. and international defense companies, meaning that they won’t be ready for months.

“This package is about building enduring strength for Ukraine as it continues to defend its sovereignty in the face of Russian aggression,” Colin Kahl, U.S. undersecretary of defense for policy, told reporters at a Defense Department briefing on Thursday. “[Russian President] Vladimir Putin seems to believe that Russia can win the long game—outlasting the Ukrainians in their will to fight and the international community’s will to continue to support Ukraine.”

Wednesday’s announced aid, Kahl said, “is a tangible demonstration that this is yet another Russian miscalculation.”

The U.S. Defense Department has already begun to spin up new groups to work on the long-term fight, as U.S. officials have indicated that they’re looking at upgrading Ukraine to more NATO-level systems, including artillery and fighter jets, as stocks of Soviet-era supplies in the West have run short. U.S. Defense Secretary Lloyd Austin has tasked his office to work with the Joint Chiefs of Staff and U.S. European Command to outline Ukraine’s future military forces. British Prime Minister Boris Johnson, who traveled to Kyiv, Ukraine’s capital, for the country’s Independence Day despite warnings of missile strikes, announced that Britain would provide around $64 million in new weapons, including surveillance drones and missile systems.

But Russia is also making moves to try to expand its military forces for the fight, with Putin on Thursday signing a decree to increase Russia’s armed forces from 1.9 million to 2.04 million people, expanding the Kremlin’s military footprint by 137,000 troops by early next year without engaging in a politically costly mobilization. On Wednesday, Russia’s military struck a railway station at the eastern Donbas city of Chaplyne, saying they were trying to cut off supplies to Ukrainian forces. (Ukrainian officials said 25 civilians died in the strike, including at least two children.)

Yet to play the long game, U.S. President Joe Biden’s team will have to learn to play a shorter political game on Capitol Hill. The money from Biden’s $20 billion arms package signed in May is dwindling, and the U.S. administration will soon have to go back to Congress to ask for more.