The Governmental Vacuum in Lebanon 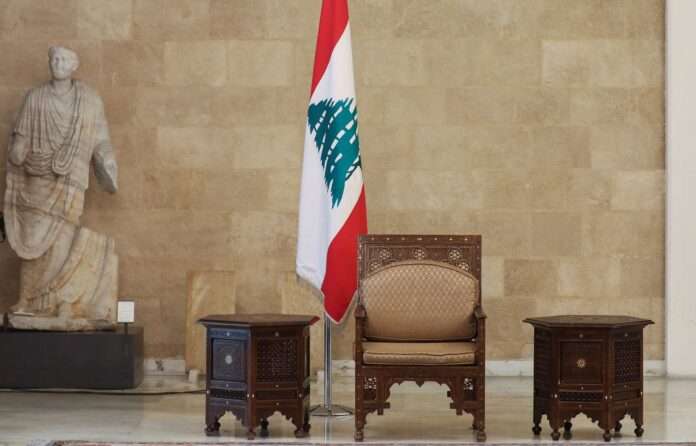 Since October 31, when the term of the Lebanese President ended, no successor has been chosen – which paralyzes the decision making processes in this already failed state. The divided Parliament will be hard-pressed to agree on a new president, primarily due to Hezbollah’s efforts to choose a candidate of its liking. What does the current political map in Lebanon look like, and how might this political chaos affect Israel?

Michel Aoun ended his term as Lebanon’s President before any replacement was selected. Once again, this led to a governmental vacuum, which is more serious now than in the past because the present government is a transitional government. The current composition of Parliament, which is responsible for choosing the president, and the internal disputes among its members make it difficult to agree on and select a candidate. Hezbollah is trying to promote Suleiman Frangieh as a candidate on its behalf and at the same time obstruct the selection of others. This situation, if it continues, will worsen the crisis in the failed state of Lebanon. For Israel, no change is expected in the balance of deterrence vis-à-vis Hezbollah or in the implementation of the maritime agreement with Lebanon in the short term, but in the long term chaos in Lebanon is likely to have negative implications for Israel.

On October 31, 2022, Michel Aoun, who was president of Lebanon for the previous six years, officially stepped down from office. His successor has not yet been chosen, due to a lack of agreement in the political system about who should replace him. This is not the first time that Lebanon has lacked a president; the most notable such incident was the gap of over two years between the end of Michel Suleiman’s term in May 2014 and the beginning of Aoun’s term in October 2016. However, the lack of a president now creates more serious difficulties, for two reasons: the severe economic crisis facing Lebanon, which is the worst in its history; and the fact that the current government, in place since the elections on May 15, 2022, is a transitional government, given the inability of the leading political elements to agree over how to form a new government.

From Aoun’s speech on the day his term ended, it was clear that he aspires to define his legacy as constructive; he emphasized the achievement of the maritime border demarcation agreement with Israel, and placed responsibility for the Lebanon’s current plight on his political rivals. He attacked the leaders of the justice system for acting only based on their personal interests and not for the benefit of the Lebanese people; called to wipe out corruption; and claimed that he is leaving behind a state that was plundered. However, Aoun’s efforts will likely not help in repairing his public image in Lebanon: he is seen as someone who contributed to the collapse of the state and who was ineffective in advancing solutions, as well as one who failed to bring to justice those responsible for the explosion in the Beirut port in August 2020. The Lebanese public also do not look kindly on the legitimacy that Aoun granted Hezbollah, which gained military and political strength during his term and became a central element in the Lebanese system.

A caricature published in the newspaper “Al-Arabi Al-Jadid”

The Lebanese constitution dictates that in the absence of a president, his authority is delegated to the government, but to a limited extent. Until now, it was customary that if there was no president, government decisions would be made unanimously. However, there is a dispute about whether the current transitional government headed by Najib Mikati, which was not approved by the President and the parliament, can fill this role. The outgoing President also contributed to the political chaos by signing – on the day before his term ended – an order approving the resignation of the transitional government: this reflected his personal interest and the interest of his party to weaken Mikati’s status, after failing to reach an agreement with him about the make-up of the new government. Mikati himself rejected this move by Aoun and continued in his role and in this won the support of most parties, excluding the Christian Free Patriotic Movement (FPM), affiliated with Aoun and his son-in-law Gebran Bassil. Even Hezbollah conveyed a message regarding its lack of desire to boycott the temporary government, but emphasized that this government cannot make important or unilateral decisions and must only convene in extreme cases. Regarding the criticism, on November 10, Mikati called for Parliament to act quickly to appoint a new president, and claimed that the government is fulfilling its duties under law and has no intention of taking unmandated authorities, while stating that there are elements attempting to prevent the appointment of a new president.

The selection of a new president is the responsibility of Parliament, but its present composition makes it especially difficult to achieve any agreement. The camp that supports Hezbollah (the so-called March 8 Alliance), which was weakened in the last elections, lacks the majority needed to choose a candidate on its behalf. This camp has only 60 Parliament members, while a two-thirds majority – 86 out of 128 MPs – are needed to choose a president in the first round of voting, followed by a 65-member simple majority in the second round if these rounds are held in the same session. On the other hand, the opposition is highly divided. It includes two central blocs: the remnants of the March 14 Alliance, which opposes Hezbollah and the legacy of Aoun; and the so-called Change Bloc, which includes fragments of independent parties that are not affiliated with traditional camps.

Parliament convened five times thus far (between October 20 and November 10) to choose a president, but without a decision (Aoun was chosen only after 45 sessions of Parliament). The main candidate voted upon thus far is Michel Moawad (son of former president René Moawad), who is affiliated with the bloc of Hezbollah opponents and whom the organization claims is backed by the United States. In the fifth session, Moawad received the support of only 44 members of Parliament, all Hezbollah opponents. The members of the Change Bloc, who see him as a scion of the old leadership, did not support him. In any event, Hezbollah has the ability to recruit a veto bloc of one-third of the parliament and it is doubtful whether the divided opposition will manage to reach a consensus and achieve the election of a candidate who will challenge that organization.

The Hezbollah camp, which includes Amal and the FPM, has not yet put forward a candidate on its behalf due to internal disagreements. Its representatives worked to scuttle the sessions held until now by voting with blank ballots or boycotting the sessions in the second round in order to prevent a quorum. It appears that the leadership of this camp would like first to agree on a candidate and then work to ensure his selection, prior to bringing his candidacy before Parliament. The primary dispute is between the Shiite parties, Hezbollah and Amal, and their Christian partner, the FPM. The Shiite duo already agreed on a candidate, the younger Suleiman Frangieh, who is part of the Hezbollah camp and closely affiliated with President Bashar al-Assad of Syria. They are now trying to convince Gebran Bassil, who heads the FPM and is himself interested in the role, to support their candidate. Transitional Prime Minister Mikati also announced that he supports Frangieh. Bassil has little chance of being chosen as president given his negative public image and American sanctions against him for his affiliation with Hezbollah. For this reason Hezbollah associates blame the US and Saudi Arabia for preventing the selection of the new president. In his speech on November 11, Nasrallah claimed that Lebanon needs a president similar to Aoun, who supported Hezbollah, and who will not be put off by the American stance or bribed, in contrast with the current candidates who are calling for stripping the organization of its weapons.

In this reality, it is clear that the composition of Parliament and the disputes between and within the blocs are likely to see the continued paralysis of the Lebanese political system for a long time. Choosing a president will not solve Lebanon’s difficult problems, but an unfilled presidency would completely freeze decision-making processes in the state. The political paralysis would create additional difficulties on the expected long road to reconstructing Lebanon and prevent the advance of reforms insisted on by the IMF as a prerequisite for Western aid. It appears that the only escape from this conundrum is agreement among all camps on a compromise candidate, who would gain the support required by law. The main candidate mentioned in this regard is Commander of the Lebanese Armed Forces Joseph Aoun, whose political positions are not known but who is known for his pragmatic approach to Hezbollah. Thus far, however, he has denied that he has any interest in the presidency, and in any event, the Constitution requires him to have a two-year “cooling off” period. However, there are precedents for changing this law by consensus.

For Israel, which has an interest in domestic stability in Lebanon, the governmental vacuum in Lebanon may have implications in two main areas:

The opinions expressed in INSS publications are the authors’ alone.

Orna Mizrahi
Orna Mizrahi, a senior researcher at the Institute for National Security Studies, joined INSS in December 2018, after a long career in the Israeli security establishment: 26 years in the IDF (ret. Lt. Col.) and 12 years in the National Security Council (NSC) in the Prime Minister’s Office (she served under 8 heads of the NSC). In her last position (2015-2018) as Deputy National Security Adviser for Foreign Policy, she led strategic planning on regional and international policy on behalf of the NSC for the Prime Minister and the Israeli Cabinet, and was responsible for preparing the papers for the Prime Minister’s meetings with leaders in the international arena.
inss.org.il
Share
Facebook
Twitter
Pinterest
WhatsApp
Linkedin
Viber