Tehran Attacks Kurds in Response to Mass Protests in Iran 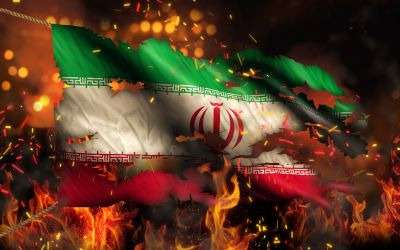 Published originally under the title “IRGC’s Attack on Kurds Is Revenge for Mass Protests in Iran.”

The Iranian regime, knowing it can’t attack Western powers who have expressed support for recent protests across the Islamic Republic, has decided to attack Iran’s Kurdish minority in response.

Iran’s decision to target Kurds is not a surprise. It is trying to distract from the murder of Mahsa Amini, the woman whose death at the hands of Iran’s police led to the protests. Amini was a Kurd from western Iran.

Iran’s regime knows that murdering a woman, particularly a woman from a minority group, will lead to anger. This is why Iran’s regime initially tried to downplay the killing, excuse it and even pretend to investigate it. This is because Iran is aware that when a regime targets a woman and murders her that this is a red line for many people in Iran, especially in the Kurdistan region.

Protests began in the Kurdish region. The slogan “woman, life, freedom” has become a rallying cry of the protests in Iran and many have pointed out that this slogan comes from the Kurdish region and has now been taken up more broadly.

The slogan “woman, life, freedom” is one that many media outlets have not noticed. Iran has now decided to target Kurdish groups across the border in Iraq as the protests spread in Iran.

Why is Iran doing this?

The Iranian regime is cracking down on the Kurdistan region in Iran. However, it fears that if it cracks down too harshly that it could provoke a more widespread rebellion.

Iran’s regime knows it is hated by groups across Iran, from minority Kurdish, Azeri, Baloch and other groups, to Farsi speakers in Tehran. It can’t fight all the opposition at once. The regime survives by fighting one group at a time. That is how the center survives while keeping the periphery on edge. This is why Iran has been bombarding the Kurdistan autonomous region in Iraq.

Iran’s regime knows it is hated by groups across Iran, from minority Kurdish, Azeri, Baloch and other groups, to Farsi speakers in Tehran. It can’t fight all the opposition at once.

Rudaw in northern Iraq notes that IRGC-affiliated media Fars News “defined the attacks on the Kurdistan Democratic Party of Iran (KDPI) and Komala, both Kurdish-Iranian opposition groups with bases in the Kurdistan region, as a response to the evil support of the anti-revolutionary elements for the disturbances and actions of thugs and with the aim of punishing and extorting these groups.”

The mayor of an area called Sidakan said that the shelling has now taken place for three days. This is illegal shelling by Iran attacking what it claims are Kurdish groups across the border. The New York Times termed these groups “separatists” in an article, but the groups are opposition groups that have long struggled for Kurdish rights in Iran.

Iran’s Tasnim upped the rhetoric against Kurdish dissident and opposition groups this week, claiming that “the ground forces of the Islamic Revolutionary Guard Corps have started their new round of operations against the positions of terrorist groups in the Kurdistan region of Iraq this [Monday] morning.”

Iran claims that it has used artillery and drones to carry out the attacks. It claims to have struck the “assembly headquarters and training and operational centers of the terrorist groups based in the Kurdistan region of Iraq, using smart and pinpoint weapons.” Iran admitting it used drones is interesting. Iran is increasingly using drones in its operations and exporting drones to Russia.

Iran’s media also says it has struck Komala and the KDPI group.

This is the shadow war that has taken place in Iran’s Kurdistan region and across the border. Iran’s decision to target the Kurdish groups is clearly linked to the protests.

Seth Frantzman is a Ginsburg-Milstein Writing Fellow at the Middle East Forum and senior Middle East correspondent at The Jerusalem Post.