The war in Ukraine has hastened the prospects of coming space wars. In an October 26 statement at the Thematic Discussion on Outer Space of the 77th Session of the United Nations General Assembly, Deputy Head of the Russian Delegation Konstantin Vorontsov warned that the use of outer space civil infrastructure facilities and commercial satellites in armed conflicts by the United States and its allies may make them legitimate targets for Russian retaliatory strikes. Taking advantage of the forum, the Russian Federation reiterated the need for international commitments regarding the weaponization and militarization of outer space to prevent a full-fledged arms race. Vorontsov expressed concerns over the US efforts to extend weapons systems in outer space “designed for the threat or use of force.”

The remarks are in line with an earlier Sino-Russian February 2022 joint statement opposing plans to turn outer space into an arena of armed confrontation. For this purpose, both sides expressed the need to advance the Russian-Chinese draft treaty on the prevention of placement of weapons in outer space as well as to strengthen the role of the UN Committee on the Peaceful Uses of Outer Space as a platform for coordinating international cooperation and developing international space law. Likewise, the US State Department and NASA have spearheaded the Artemis Accords — or a non-binding declaration of principles and rules grounded in the 1967 Outer Space Treaty —  to ensure safe and transparent civil space exploration, and promote “peaceful cooperation in space exploration and scientific endeavors.”

Yet, the weaponization of outer space is ongoing. Countries around the world are making unprecedented commitments to civilian space exploration as well as its militarization. According to the Secure World Foundation’s 2022 Global Counterspace Capabilities report, “an increasing number of countries are looking to use space to enhance their military capabilities and national security” by developing a broad range of defensive and offensive dual-use technologies. In addition to active investments in counter-space programs by France, India, Iran, Japan, and North Korea, dominant players such as China, Russia, and the United States lead in the research, development, testing, and systems and weapons operationalization domains, enhancing the risk of future conflicts in space. 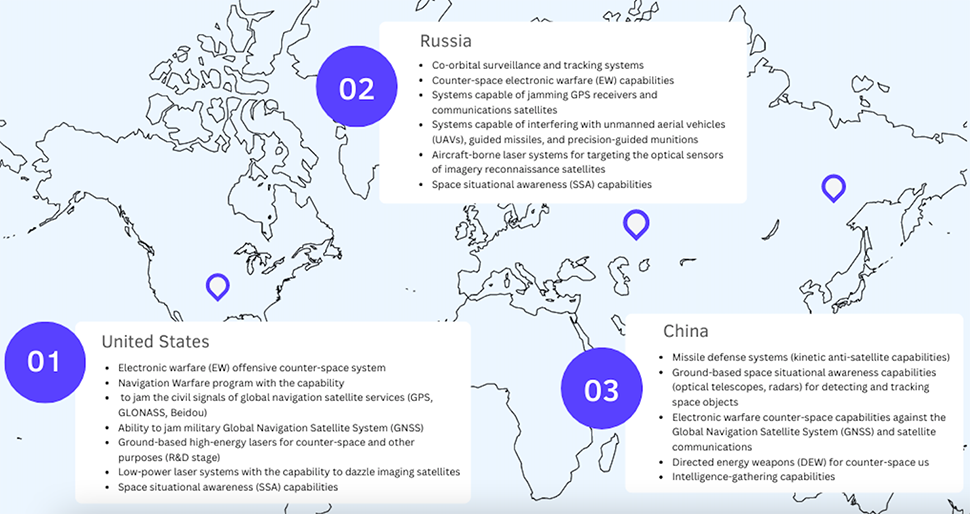 This raises several timely and legally difficult questions indirectly alluded to by the Russian UN delegation:

The core international humanitarian law principles of distinction between civilians and combatants or civilian objects and military objectives, proportionality, and necessity constitute an established benchmark for assessing the legality of jus in bello conduct, impose the requisite limits on the use of force and are good albeit inadequate sources for analyzing inter-state conflicts, including those potentially extending beyond the terrestrial realm.

International law permits states to resort to armed force only in cases of self-defense or aggression requiring that parties to the conflict distinguish between civilian objects and military objectives and use force that is proportional or such that prevents an “incidental loss of civilian life, injury to civilians, damage to civilian objects, or a combination thereof, which would be excessive in relation to the concrete and direct military advantage anticipated.” States intent on attacking the satellite infrastructure of other states, therefore, would need to balance the military advantages sought and the prospects of damage and civilian losses related to it. Provided that the attack was not indiscriminate, the legal controversy might arise when, in the fog of war, it might become increasingly difficult to draw appropriate distinctions between private civilian satellite systems contracted to state militaries in order to help them achieve military objectives in an inter-state conflict and raising the question of whether a civilian satellite system contracted to a military entity in order to advance its military objectives in an inter-state conflict ceases to be a civilian object and as such is no longer immune from an attack by adversarial armed forces.

Creating appropriate legal instruments that would provide the necessary legal guidance on fundamental dilemmas of international law of armed conflict in outer space, illustrated by the above questions and express general principles of international law applicable to the extraterrestrial domain, is a sine qua non on the evolutionary path of modern-day conflicts. This will involve expanding the remit of existing institutional mechanisms for arbitrating legal disputes between state and non-state entities engaged in the space arms race and providing advisory opinions on urgent international legal issues while establishing a workable framework for space diplomacy.