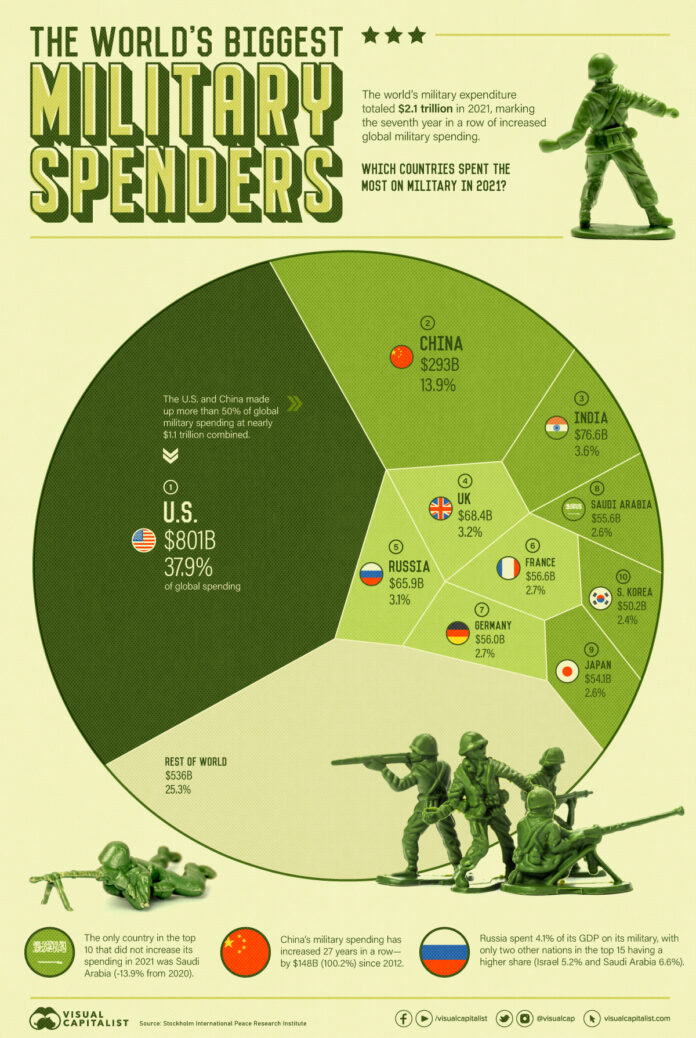 The Top 10 Countries by Military Spending in 2021

As Russia’s invasion of Ukraine has continued, military spending and technology has come under the spotlight as the world tracked Western arms shipments and watched how HIMAR rocket launchers and other weaponry affected the conflict.

But developing, exporting, and deploying military personnel and weaponry costs nations hundreds of billions every year. In 2021, global military spending reached $2.1 trillion, rising for its seventh year in a row.

Using data from the Stockholm International Peace Research Institute (SIPRI), this visualization shows which countries spent the most on their military in 2021, along with their overall share of global military spending.

Which Countries Spend the Most on Military?

U.S. military spending increased year-over-year by $22.3 billion, and the country’s total for 2021 was more than every other country in the top 10 combined.

The next top military spender in 2021 was China, which spent $293.4 billion and made up nearly 14% of global military spend. While China’s expenditure is still less than half of America’s, the country has increased its military spending for 27 years in a row.

In fact, China has the largest total of active military personnel, and the country’s military spending has more than doubled over the last decade.

Military Collaboration Since the Russia-Ukraine Conflict

Russia’s invasion of Ukraine in February has resulted in seismic geopolitical shifts, kicking off a cascade of international military shipments and collaboration between nations. The security assistance just sent by the U.S. to Ukraine has totaled $8.2 billion since the start of the war, and has shown how alliances can help make up for some domestic military spending in times of conflict.

Similarly, Russia and China have deepened their relationship, sharing military intelligence and technology along with beginning joint military exercises at the end of August, alongside other nations like India, Belarus, Mongolia, and Tajikistan.

Since China’s breakthrough in hypersonic missile flight a year ago, Russia has now been testing its own versions of the technology, with Putin mentioning Russia’s readiness to export weaponry he described as, “years, or maybe even decades ahead of their foreign counterparts”.

Along with advanced weaponry, sanctions and energy commodities have become new tools of modern cold warfare. As Western economic sanctions attempted to cripple Russia’s economy following its invasion, Russian gas and oil supplies have been limited and forced to be paid in rubles in retaliation.

Global trade has been turned into a new battlefield with offshore assets and import dependencies as the attack vectors. Along with these, cyberattacks and cybersecurity are an increasingly complex, obscure, and important part of national military and security.

Whether or not Russia’s invasion of Ukraine ends in 2022, the rise in geopolitical tensions and conflict this year will almost certainly result in a global increase in military spending.