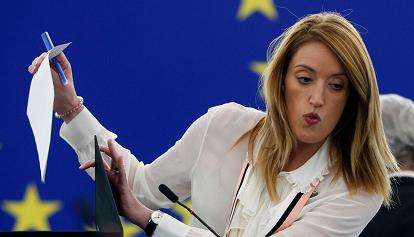 The soccer ball is not round. Billions of football fans are convinced that they are attending the World Cup in Qatar. But the game is quite different. And it is played in a field that has nothing to do with sport: it is the most classic of the war between spies. The European Union has been overwhelmed by the Qatargate scandal. At the highest level: the vice president of the parliament, the Greek MP Eva Kaili has been arrested. While attempts are being made in the Old Continent to ban cash in order to be able to digitally track citizens, over 700,000 euros in banknotes of 20 and 50 euros were seized in Kaili. The law, as we know, is not the same for everyone.

According to the reconstruction of the European media we know that the investigations into these confirmed cases of corruption date back to five months ago, at least. Qatar, the newspapers claim, would not have acted in the first instance. It would have been the intelligence officials of the kingdom of Morocco who weaved relationships with politicians and staff of the Brussels parliament. The scandal is destined to spread: there could be more than sixty MEPs involved.

The investigation by the Belgian judiciary stems from a dossier from the Brussels secret service. A classified file marked “national security”. But the Belgian 007s of the VSSE didn’t work alone. The interference activity of the network linking Morocco and Qatar would have been put together by other European agencies: certainly there is the hand of the French DGSE.

The maneuver of corruption towards the European Parliament – write the Belgian magistrates – would have been activated by Belharace Mohammed, an officer of the Dged, the secret service of the kingdom of Morocco. Belharace was also able to count on the intermediation of a diplomat based in Warsaw: Abderrahim Atmoun. But Belharace is only the operative agent: the project to infiltrate the European Parliament would be an idea of Mansour Yassine, the very powerful director general of the Dged.

To understand what is really happening, going beyond the news, we need to go back a few weeks. At the Al Thumama Stadium in Doha on 27 November the decisive match between Morocco and Belgium is played. The presence in the stands of Yassine Mansouri and Abdellatif Hammouchi (national director of security in Morocco) is not noticed by sports journalists. But in Qatar there are spies from all over the world. The news of the presence of the top Moroccan intelligence executives puts the Elysée in turmoil. And since the God of football is a bit witty, the match that counts for the final of the football tournament will see the national teams of Rabat and Paris oppose each other.

It is therefore possible that it was Paris that set in motion the defamatory machine against the Emir of Qatar. French spymaster Bernard Emié is sent to Doha to “supervise” the France-Morocco semi-final match. The head of the Directorate-General for External Security (DGSE) and former French ambassador in Algiers, is sent to Doha to “supervise” the Morocco-France semi-final behind the scenes. All this happens a couple of weeks before the Qatargate scandal: an investigation, as we have seen, packaged by the Belgian secret services who have received mountains of documents from their French colleagues.

Why is a football match so important for the secret services of Africa and Europe? There is a geopolitical reason. But it’s tiny. For France, reigning world champions, it would be a terrible setback to be defeated by Morocco. It is as if a new world order were being established in sport. And France with its African global currency has no intention of giving up the scepter. For info, ask the ghost of Gaddafi. In reality, it is likely that more thorny issues lurk behind the so-called Qatargate.

Does the alliance between Qatar and Rabat only serve to get people talking about the Emirate? It’s hard to settle for this version. Just as it’s hard to believe that Morocco’s intelligence staff is bothered by a simple football match. And it is equally incomprehensible that Paris sends its most important intelligence officer in response. In reality there is no mystery. It’s a plot that everyone knows. And that everyone today is competing to hide. If Morocco really bribed EU officials and parliamentarians, it can only have done it for one reason: Western Sahara.

Long before this media scandal, geopolitical analyst Anthony Dworkin of the European Council for foreign relations had explained what is happening between the EU and Morocco: “European states and the EU play a key role in North Africa via historical ties, geographical proximity and economic ties to the region and could help reduce tensions between Morocco and Algeria, but to do so they must maintain a balanced position in relations with both countries. However, European leaders often seem unwilling to assert themselves in the face of Morocco’s demands and thus encourage its maximalist policies, undermining their credibility in the eyes of Algeria”.

In short, everything was already written. The EU is dominated by Morocco. Today perhaps we discover that it happens not for noble geopolitical reasons but for vile money. The existence of an attempt at political pressure by Morocco against the EU, therefore, was and is a certain and clear political fact. Hostilities between Morocco and the Polisario Front (Saharawi) resumed in November two years ago, when the Polisario announced the end of the ceasefire after Moroccan forces had crossed the buffer zone of Guerguerat, controlled by the UN. As always, the spark came from Washington. Has anyone forgotten that Morocco’s military maneuvers began after the Trump administration recognized Moroccan rights to those territories?