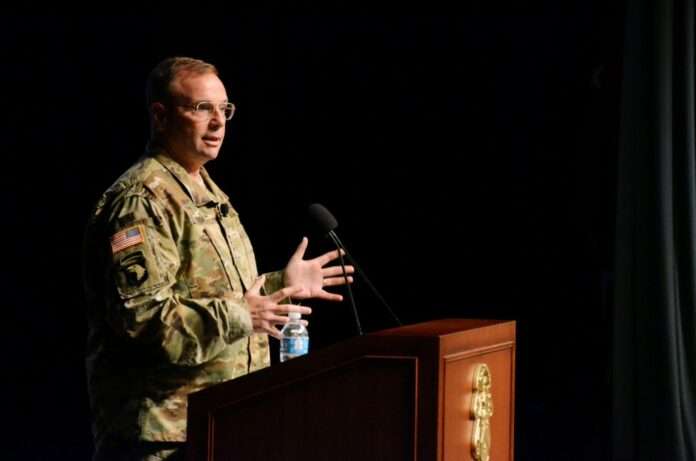 Lieutenant General (Retired) Ben Hodges is former commanding general of US Army Europe. He now serves as a senior advisor for Human Rights First, a nonprofit advocacy group. In an August 6, 2022, interview with the Atlantic Council’s Rich Outzen, Hodges, also co-author of the book Future War and the Defence of Europe, discussed the frictions and continuities in the United States–Turkey relationship. Having spent several years in Turkey as commander of Allied Land Command, he said that “Turkey is not doing all that it could or should” on Ukraine, but praised some of its efforts.

Defense Journal by Atlantic Council IN TURKEY (DJ): How would you characterize Turkey’s role in and contributions to NATO’s warfighting capabilities?

Frederick Benjamin “Ben” Hodges III (FBH): Turkey has delivered everything it was asked for in NATO missions, and has always been there when called. It met every manning requirement with high-quality officers, and has provided professional, competent, and reliable forces to NATO missions. The equipment was top shelf, with impressive modernization projects in a number of areas. One memory that stands out was watching the Turkish Land Forces’ EFES joint combined arms live fire exercise (CALFEX). The drill involved over thirty Turkish Navy vessels, fixed and rotary wing aviation, paratroopers, engineers. It was among the best large-scale joint live fire exercises I have seen. Now, several years later, the Turkish military also has a large number of troops with recent combat experience, making it an even more formidable component of NATO’s defense array.

DJ: Has the Ukraine war changed Western perceptions of the relevance of combat-ready NATO forces?

FBH: Yes, but things really started changing before this year. The 2016 NATO Summit in Warsaw brought the Enhanced Forward Presence initiative, forming land forces’ battle groups and bringing an armored-division worth of US equipment back to Europe. The Madrid Summit laid out very clear missions for deterrence and warfighting, both conventional and nuclear. Russia’s willingness to use a variety of missile systems against populated areas in Ukraine has been an eye-opener, as NATO realized a need for air defense capabilities—not just for military targets but for hundreds of densely populated urban areas across Europe. The rate of Russian military expenditure of artillery and precision-guided munitions has demonstrated that US and European industry need to pick up the pace as well. Our [United States] training scenarios have been refocused back to conventional warfighting, with some de-emphasis on counterterrorism.

Turkey’s role in NATO’s conventional defense is significant. It has commitments under a number of warfighting operational plans that it is prepared to fulfill. The excellent work of Turkish forces serving as the 2021 Very High Readiness Joint Task Force shows its ability to do so.

DJ: Black Sea security is a rising concern for the United States and for NATO. Can you say a little more about Turkey’s role in the Black Sea?

FBH: The United States has erred in the past by viewing countries on the Black Sea littoral as individual islands rather than as a strategic system of sorts, leading to missed opportunities. There has been a mismatch between policy and regional strategy. We [The United States] have to do a better job of investing in a manner that integrates and strengthens our [The United States] friends in a regional vision and strategy. This means being prepared to defend our allies against direct threat, but also finding ways to incentivize economic cooperation so that it maximizes their potential and decreases the influence of countries like Russia and Iran.

The Black Sea should be seen as an economic corridor linking southeast Europe, Turkey, and the Caucasus. It is not just a mission of countering Russia, but of providing a bulwark for the West against Iran, as well.

DJ: How would you assess Turkey’s current role in the Ukraine war?

FBH: Frankly, Turkey is not doing all that it should or could. I say that as a friend, but a friend who has increasing difficulty defending Turkey’s halfway position. The need to maintain diplomatic and trade ties with Russia is understandable. But allowing the export of grain stolen from Ukraine and shipped to Turkey from Sevastopol, on the theory that it is from Crimea and not Ukraine, ignores Ankara’s own view of Russian annexation of Crimea as illegal. Turkish ship trackers see constant questionable traffic between Russian and Turkish ports, and while Ukraine and the world appreciate Turkey’s support to Ukraine, the tolerance of Russian illicit trade undermines Turkey’s standing.

Turkey makes a claim to regional leadership in the Black Sea, but at some point, leadership involves principle, not just pragmatism. Turkish leadership means synching the country’s NATO and regional roles. Enforcing Montreux Convention restrictions on Black Sea entry on Russia as a combatant makes sense, but asking informally for noncombatant NATO allies not to access the Black Sea is not the right kind of leadership.

DJ: What is one thing about the Turks that is most often missed in Washington?

FBH: Geography, for one. For American diplomats and soldiers dealing with Europe, Turkey is in the lower right-hand corner of the map, on the periphery. For those dealing with the Middle East, such as US Central Command, Turkey is an obstacle to US plans and operations located on the northern periphery. Yet Turkey is rightfully at the center of its own map, which is a very complicated one: Iran, Iraq, Syria, the Mediterranean, the Black Sea, the Caucasus. Without appreciating how Turkey views this difficult neighborhood and how it prioritizes and will respond to threats and opportunities, and crafting mutually acceptable solutions that account for Turkey’s views, US strategies for the region stand to enjoy bleak prospects.

DJ: So, what would you propose doing to take advantage of the Black Sea opportunity?

FBH: NATO, led by Turkey and the United States in this case, needs a strategy to account for the entirety of the Black Sea area. We need to begin with an agreement on the nature of the threat. Then we [The United States and Turkey] need confidence-building measures; Turkey needs to be convinced and reassured that the United States and NATO will not leave them exposed in any confrontation with Russia. As of now, based on events in Syria and elsewhere, the Turks are concerned that NATO would not back them up against Russia, despite asking for its support against Russia to defend others. This is hard because US support to Turkey has been intermittent at best, due in large measure to the domestic political discourse in the United States.

DJ: How do you view the current state of United States–Turkey military-to-military relations?

DJ: How do you see the prospects for extra-regional cooperation between Turkey and the United States—beyond the NATO space or along Turkey’s borders?

Lieutenant General (Retired) Ben Hodges is former commanding general of US Army Europe who now serves as a senior advisor for Human Rights First, a nonprofit advocacy group. Hodges is a co-author of the book Future War and the Defence of Europe.