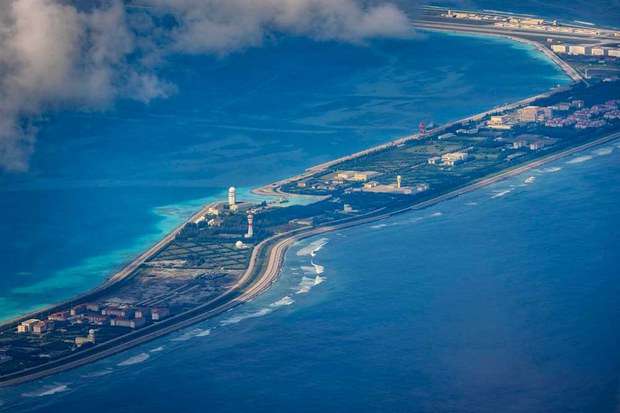 In this Oct. 25, 2022 aerial photo, buildings and communication structures are seen on the artificial island built by China in Mischief Reef in Spratly Islands, South China Sea. China has progressively asserted its claim of ownership over disputed islands in the South China Sea by artificially increasing the size of islands, creating new islands and building ports, military outposts and airstrips.

New images have emerged showing airfields and other structures on some of China’s artificial islands in the South China Sea that the U.S. said had been “fully militarized.”

Getty Image’s photographer Ezra Acayan obtained access to flights near a number of reefs and rocks that China has reclaimed and turned into military bases with radar stations, airstrips and artillery installations.

The photos taken on Oct. 25 show another dimension of the Chinese artificial islands, up to now mostly captured on satellite images.

Fiery Cross Reef appears to be one of the most developed, with a fully operational airfield, hangars, other large buildings and radomes, or domes with radar equipment inside.

A new type of building spotted on Fiery Cross, as well as on Mischief and Subi Reefs, is a garage-like structure that may be sheltering missile launchers, according to analysts.

“My guess is that the sea-facing garages are for angled cruise missile launchers,” Tom Shugart, adjunct Senior Fellow at the Center for a New American Security, wrote on Twitter.

Another analyst, Tyler Rogoway, editor of The War Zone defense news portal, said they could “be used to house, service, and rapidly deploy” launchers used to fire surface-to-air, anti-ship, or surface-to-surface missiles.

Shugart also noted some other details such as “a car driving around Fiery Cross and someone walking down a street.”

“It’s not crowds, but it’s also not nothing,” he wrote.

Three weeks ago Chinese state media reported that there is a growing population of more than 5,000 “officers and soldiers stationed” on islands and reefs that China occupies in the South China Sea.

In one of the pictures of Fiery Cross, a KJ-500 airborne early warning and control aircraft is visible on the runway.

“The image of a KJ-500 on the runway is compelling and confirms that the PLA is still regularly flying aerial patrols off the islands,” Greg Poling, director of the Asia Maritime Transparency Initiative at the Center for Strategic and International Studies (CSIS) told RFA.

According to The War Zone’s Rogoway, the KJ-500 and other intelligence-gathering and submarine-hunting aircraft “frequently operate from the airfield there.”

Radomes, gun turrets and close-in weapon systems for detecting and destroying incoming missiles and aircraft are common features on all the artificial islands.

On Subi Reef, the main runway is being blocked by several objects, possibly vehicles, or carts.

“This is an unsafe act, hostile to anyone else flying in the area” as pilots of an aircraft in true distress may not see the blockade and crash, according to Shugart.

“This once again puts the lie to the idea these islands were built for the navigational safety of all,” the Fort Hood-based analyst said.

China and five other parties claim parts of the South China Sea including the features which, according to the U.N. Convention on the Law of the Sea, are reefs and rocks and not islands.

By law, reefs and rocks have much more limited rights to natural resources than islands.

Beijing has developed at least seven artificial islands, creating 1,295 hectares (3,200 acres) of new land since 2013, according to the CSIS Asia Maritime Transparency Initiative.

On a trip to Washington in 2015, China’s leader Xi Jinping said “China does not intend to pursue militarization” of the artificial islands in the South China Sea but critics say they greatly expand the offensive capability of the PLA and threaten other countries in the vicinity.

photo:In this Oct. 25, 2022 aerial photo, buildings and communication structures are seen on the artificial island built by China in Mischief Reef in Spratly Islands, South China Sea. China has progressively asserted its claim of ownership over disputed islands in the South China Sea by artificially increasing the size of islands, creating new islands and building ports, military outposts and airstrips.