Kenya Goes to The Polls 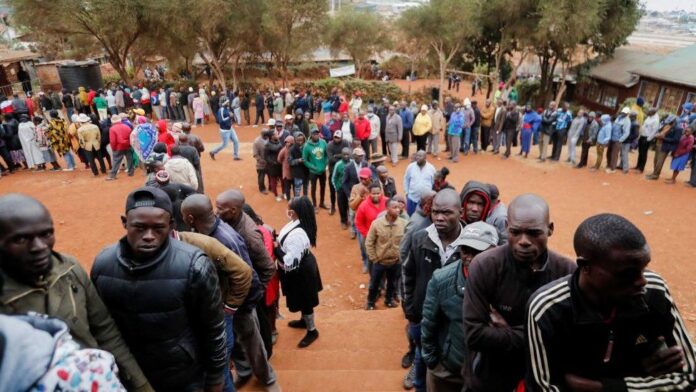 After almost ten years under President Uhuru Kenyatta, Kenyans go to the polls today to decide on his replacement.

As FP’s Nosmot Gbadamosi wrote in last week’s Africa Brief, the election is full of paradoxes: Raila Odinga, a five-time opposition presidential candidate, is the establishment pick, while William Ruto, the current vice president, has marketed himself as the outsider.

Those positions were set in motion by the term-limited Kenyatta, who crossed party lines to endorse his old nemesis Odinga, fracturing the president’s own ruling Jubilee party, whose splintered factions also face voters today in legislative elections.

Ruto has turned the snub into a campaign line, taking the position of a populist bent on disrupting the elite levels of Kenyan politics. With his rags-to-riches story (which includes a history of corruption allegations), Ruto has branded himself as one of the country’s “hustlers,” in contrast to the elite “dynasties” he has railed against.

Today’s election is unique in Kenya’s history in that neither main candidate is a Kikuyu—the country’s largest ethnic group (Odinga comes from the Luo ethnic group, Ruto from the Kalenjin). Both men have attempted to court the influential bloc by naming Kikuyu running mates. Martha Karua, Odinga’s vice presidential pick would be the first woman to hold the role.

Ethnic politics may partly explain why neither man can seem to regularly beat the other in opinion polls, raising the specter of another first for Kenya—an election run-off.

As has become common in elections worldwide since the outset of the coronavirus pandemic and the war in Ukraine, the cost of living has been the driving concern of Kenyan voters. Food prices are up 15.3 percent compared to last year, while inflation climbed to a five-year high of 8.3 percent in July.

Odinga and Ruto will have to deal with those concerns at a national level, even if neither of them will experience them directly; both men are extremely wealthy. They belong to class of super-rich that is growing in Kenya at a faster rate than in almost any other country. That wealth isn’t spreading, however; less than 0.1 percent of Kenya’s population now owns more than the other 99.9 percent, according to Oxfam.

Odinga has pledged to begin direct cash transfers to the approximately 30 percent of Kenyans living below the poverty line, while also expanding healthcare access. Ruto has focused on the agricultural sector, which employs 70 percent of the country’s workforce. He has promised to spend $4.2 billion over five years to boost the sector and increase food security.

Neither man will have free rein when it comes to spending, however. The country is still in the midst of a loan program with the International Monetary Fund; it’s facing the worst drought in 40 years; and it’s a net fuel, wheat, and fertilizer importer, leaving it exposed to price shocks driven by the war in Ukraine. Kenya’s economy is expected to slow this year but will still post a respectable 5 percent growth rate, according to World Bank projections.