Jonathan Spyer: Is Erdoğan’s Turkey Aiding in a Jihadist Takeover of Northwest Syria? 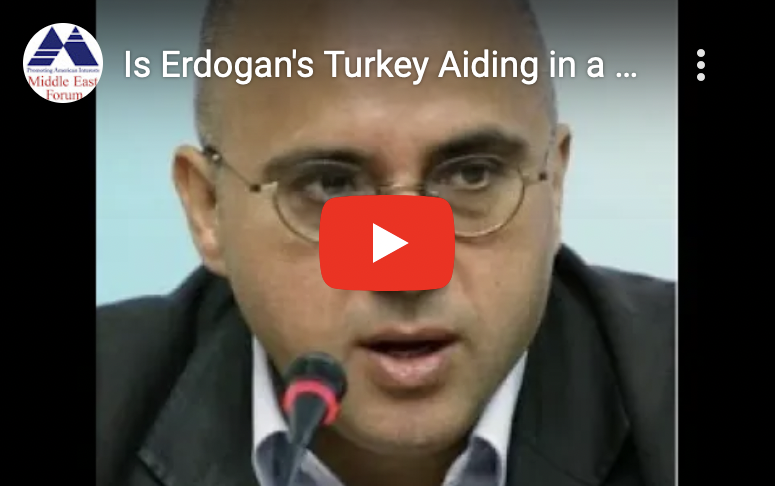 Spyer described the extremely complex conditions in northwest Syria in the context of a fractured war-torn country divided overall into “three power enclaves.” The Assad regime controls 60 to 70 percent, the Kurds and U.S. control 25 to 30 percent, and Turkey, “in cooperation with a number of Islamist militias,” operates in the remainder.

The Syrian territory controlled by Turkey, which President Recep Tayyip Erdoğan “is the essential guarantor of,” is divided between two areas: (1) To the north, the enclave of Azaz is ruled by the Syrian National Army (SNA), a “notional” government entity controlled by Turkey and comprised of a number of rebel militias; and (2) To the south, the province of Idlib is controlled by Hayat Tahrir al-Sham (HTS), a “hard-liner” Sunni Jihadi organization and “former franchise of Al-Qaeda,” and its “Syrian Salvation Government.” Spyer said that even though Erdoğan does not “officially” cooperate with HTS, which Turkey as well as the U.S. and the European Union (EU) consider a terrorist organization, recent events Spyer has reported on indicate that “de facto, there is a tacit cooperation on the ground” between Turkey and HTS.

To fight the Kurds in northeast Syria, Turkey has populated the SNA (which it established) with Syrian refugees who fled Assad’s civil war. The Kurdish Democratic Union Party’s (PYD) fighting force (YPG) is broadly aligned with the PKK, Kurdish insurgents who have fought Turkey since the mid-1980s and whom Erdoğan regards as terrorists. Turkey’s multiple invasions of northwest Syria’s Kurds since 2016 were triggered by the Kurds’ growing control over much of the “900 kilometer” long Syrian-Turkish border, which Erdoğan regarded as an “urgent” threat. His strategy was to “chip away” at Kurdish control of the border, separating them into enclaves, “and destroy[ing] them.”

Spyer said Turkey’s aim to “disempower” the Kurds is stymied by the SNA, an “unimpressive force” racked by conflict between tribal militia groups that are “mafia-like” and at war with each other “for petty criminal reasons.” Turkey’s enabling the HTS to fight and defeat part of the SNA in Afrin, a northwest Syrian area that had been under Kurdish rule until Turkey wrested control in 2018, caused a lot of speculation among foreign policy analysts. Spyer dismisses the idea that Erdoğan’s opening the door for the HTS is a path to rapprochement with the Assad regime. Spyer said that Erdoğan is “an ideological man” and unlikely to abandon the “Sunni Arab rebels and Islamists and Jihad,” since doing so “would be him essentially conceding defeat on a strategic level for a policy he’s promoted over the last decade.”

Instead, Spyer surmises that Erdoğan saw the “chaos” in the region under the SNA and reasoned that the HTS – jihadis who enforce Sharia law and strict governance to deal with any corruption or opposition – would be a “more stable and reliable partner” for the Turkish government to control. Russia, which until recently had restrained Erdoğan from launching additional offensives against the Kurds west of the Euphrates and is still “committed” to the Assad regime, is redeploying significant components of its forces from Syria to the war in Ukraine. In the meantime, the U.S. maintains a military presence east of the Euphrates to counter ISIS while also protecting the Kurds.

Erdoğan’s support for the HTS is not a new development, given his history of supporting Jihadi and Islamist groups such as Hamas in Gaza, the short-lived Muslim Brotherhood (MB) government in Egypt, and the MB “franchise” Ennahda Party in Tunisia. Turkey is also “increasingly close” to “major non-NATO allies” Pakistan and Qatar, which also support Islamism and Jihadi groups. Spyer said the power plays in northwest Syria are of importance to the West because they are “part of a much larger picture.” Consequently, Washington’s and Jerusalem’s foreign policy vis a vis Turkey should consider “the nature of the Turkish government.”

This current Turkish government of Erdoğan and the AKP has basically made a strategic ally across the region of Sunni political Islam. … The examples are countless, and they form part of a coherent regional strategy in which the Turkish government wishes to partner with anti-Western dangerous and violent Sunni Islamist forces.

By “hollowing out” Turkey’s free media, its court system, and the top echelon of the Turkish military and security forces, Erdoğan’s “support for political Islam” has had a chilling effect on the country. Spyer said Erdoğan’s replacement of Kemalist nationalist officers with Islamists are part of his effort to create a “new Islamic Republic of Turkey.” Turkey’s membership in NATO and its support of an al-Qaeda affiliate are indicative of Erdoğan’s double-dealing with the West while furthering his Islamist project.

Spyer said that Erdoğan’s recent pursuit of a rapprochement with Israel is a result of his “pragmatic” calculations that it will enable him to recover from domestic problems that are putting his 2023 re-election bid at risk. Specifically, Turkey is facing “runaway inflation,” with its economy “in an enormous mess.” By “reconciling” with Israel and other U.S. regional allies, Erdoğan thinks he will get back in the good graces of the U.S.

Spyer: It is “unwise” to continue the tolerance the U.S. and others have displayed in the past towards Turkey and its ideological Islamist allies. “I don’t think it should be cost-free. … I absolutely think that there should be a reckoning.”

Spyer, who is highly skeptical of Erdoğan’s overtures, anticipates that Israel’s newly elected prime minister Netanyahu will have little “patience” with Turkey’s mercurial behavior towards the Jewish State and is loath to jeopardize the positive relationship Israel has forged with Cyprus and Greece, Turkey’s adversaries. Turkey’s rapprochement may be “on thin ice,” despite Erdoğan’s comments to stay the course towards Israel. Spyer believes that Erdoğan may resume his animus towards Israel after elections in Turkey pass, particularly when Hamas decides to act against Israel in the next round of relentless attacks on the Jewish State.

Spyer said in response to a question that since Israel wants to have “normal relations” with Turkey, “a NATO member and a U.S. allied country,” it would not offer “overt support to the Kurds,” but the survival of the Kurdish enclave in northeast Syria is in Israel’s interest. “Apart from the moral reason” for Kurdish autonomy, “de facto,” the enclave “forms a buffer against Iranian expansion east to west.” If Iran attempted to smuggle fighters and weaponry across the Kurdish area, access to the enclave would enable Israel to “interdict at a time of war.”

Spyer said that although Turkey, like Pakistan and Qatar, are “notional” close allies of the U.S. and the West, each actively supports Islamist Jihadi organizations committed to the destruction of the West by continuing to engage in duplicitous behavior that undermines the security of the U.S. and Israel, “largely cost free.” He believes it “unwise” to continue the tolerance the U.S. and others have displayed in the past towards Turkey and its ideological Islamist allies. “I don’t think it should be cost-free. … I absolutely think that there should be a reckoning.”