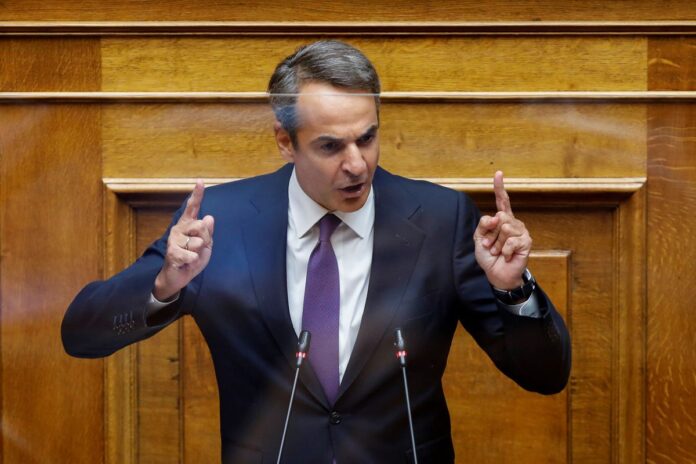 ATHENS, Aug 26 (Reuters Breakingviews) – It is only a few years since the Grexit horror movie ended. But sadly Greece’s creditors, investors and allies need to start worrying about the country again. A bugging scandal threatens Prime Minister Kyriakos Mitsotakis’ government and prolonged political instability. This is not a re-run of the crisis that threatened to eject Greece from the euro. But the state’s high deficit and debt – which is 189% of GDP – are a cause for concern at a time of soaring energy prices and rising interest rates.

Earlier this month the leader of Pasok, one of Greece’s opposition parties, accused the country’s intelligence service of bugging his phone. There had also been an unsuccessful attempt from an unknown source to infect his phone with spyware, called Predator.

Mitsotakis, leader of the centre-right New Democracy party, said he was unaware of the phone tapping and wouldn’t have approved it if he had known read more . He fired the head of the intelligence service. The government’s general secretary, to whom the intelligence service reported and who is Mitsotakis’ nephew, also quit. The government denies purchasing or using Predator. Nevertheless, the Greek parliament has reconvened to debate the issue today.

Although Mitsotakis has a solid majority, he has to call an election at the latest by August 2023. This will be fought under proportional representation, with the result that no party will get an overall majority. There will then be a second election, under a new law, which will give the leading party a large number of bonus members of parliament.

Opinion polls previously suggested Mitsotakis would win a majority in this second election – or come close to doing so. But following the eruption of the bugging scandal, this no longer seems likely. What is more, it will be hard for him to form a coalition, as his obvious partner was Pasok, the centre-left party whose leader’s phone was tapped. It will be extremely reluctant to do a deal with Mitsotakis.

However, it will also be hard for Greece’s largest opposition party, the left-wing Syriza, to form a coalition. Though it would try to cut a deal with Pasok, the two groups probably wouldn’t have a majority. They might only be able to get one via a fanciful coalition including the communists and the far-right.

There are other possibilities. New Democracy might replace Mitsotakis with a leader more appealing to Pasok. Another is that Greek parties might form a grand coalition, led by a technocrat. But none of the scenarios looks terribly stable. Meanwhile, many questions about the bugging scandal remain unanswered. If there are further damaging revelations, Mitsotakis may struggle to hang on until the election.

Investors and Greece’s allies have been generally enthusiastic about Mitsotakis’ premiership. His pro-business approach and pledge to modernise the country attracted capital. His promise to run a sound fiscal policy reassured the European Union, which holds the lion’s share of the country’s humungous debt. He managed the pandemic well, drove forward the government’s digitalisation, and took steps to decarbonise the economy. And his firm line against Russia’s invasion of Ukraine got plaudits not just in other European capitals but also in Washington. He even delivered a speech to a joint session of U.S. Congress.

There are also concerns, though. Mitsotakis didn’t seem terribly interested in fighting corruption. He effectively wiped the slate clean for many financiers accused of criminal breach of trust and gave what amounted to an amnesty to large tax evaders. He also centralised power, changing the law so that the intelligence service reported to his office.

At the same time, fiscal policy was looser than might have been expected for a country that had recently gone through a near-death experience. The government handed out a lot of money to support firms and workers during the pandemic. It has also spent a larger proportion of GDP than any other EU country cushioning consumers and businesses from the energy crisis, according to Bruegel, the Brussels-based think tank. The government is on course to run a primary deficit (before interest payments) of about 3.5% of GDP this year, according to Miranda Xafa, a Greek economist.

A new government seems likely to be less pro-business than the current one. There is also a risk that Mitsotakis will take populist measures – especially spending yet more money to cap energy bills – in an attempt to hang onto power. As one election follows another, other parties will have the incentive to promise more public spending.

Greece’s creditors might argue that this doesn’t matter too much. The country’s debt was restructured as part of its bailouts. It doesn’t have to repay the principal or interest on the debt it owes the EU until 2033. What is more, although debt has been rising, the combination of inflation and economic growth means the burden has shrunk as a percentage of GDP: the ratio declined by 4 percentage points in the first quarter of the year.

Meanwhile, the EU may well avoid friction with Greece given that Europe is in the midst of a geopolitical and economic crisis. It has already suspended the bloc’s fiscal rules, which are supposed to keep national debt and deficits under control. And the EU is much more worried about instability in Italy following the fall of Mario Draghi’s government.

These factors shield Greece in the short run. But they may not be enough if there is a prolonged period of instability. After all, the government still needs to finance its ongoing deficit. From 2033 its bill for repayments and interest will jump sharply.

What’s more, once the geopolitical and energy crises are over, the EU may not be so willing to turn a blind eye to what is happening in Athens. Last week, the European Commission ended its “enhanced surveillance” of the Greek economy, on the basis that the country was finally out of the woods. That is a decision it may ultimately regret.

(The author is a Reuters Breakingviews columnist. The opinions expressed are his own.)

Hugo Dixon is a journalist, entrepreneur and political campaigner. He was Breakingviews’ first editor-in-chief and before that ran the Financial Times’ Lex Column. He also founded InFacts, a journalistic enterprise which until December 2019 was making the case against Brexit.