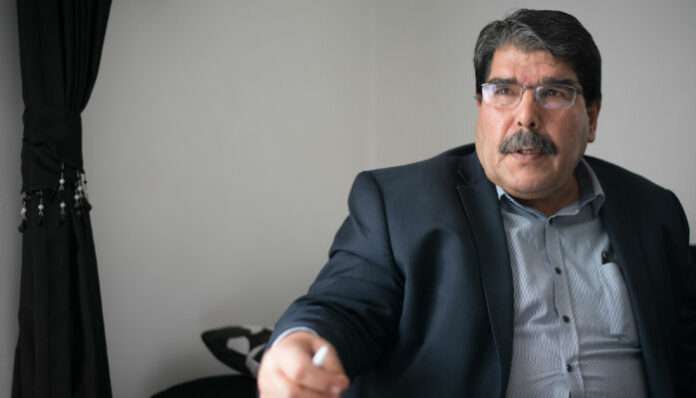 Ahlam Albashir, who was detained by Turkish police on suspicion of a bombing in İstanbul that killed six people and injured more than 80, has links to the Turkish-backed Free Syrian Army, Kurdish Syrian Democratic Union Party (PYD) Co-chair Salih Muslim claimed in an interview with Fırat News Agency (ANF) on Wednesday.

The Turkish government says Albashir is a Syrian national trained by the outlawed Kurdistan Workers’ Party (PKK), which is listed as a terrorist group by Ankara and much of the international community and has waged a deadly insurgency for Kurdish self-rule in southeastern Turkey since the 1980s.

However, surprising observers, the PKK and Syrian Kurdish militant group the Peoples’ Protection Units (YPG) have denied any role, raising questions on social media and elsewhere about the official line.

“This was a terrorist attack, which we condemn like everyone else,” Muslim told ANF.

“Nobody in our region knows the person who was responsible for the attack. However, her social media accounts indicate that she has ties to groups such as the FSA. There are photos of her in front of Sultan Murad Brigade flags. She is not Kurdish and has no ties to the Rojava Autonomous Administration,” he added.

The bomb attack in İstanbul can help boost a security-focused campaign for Turkish President Recep Tayyip Erdoğan and even a Turkish military intervention in Syria ahead of the 2023 elections, according to a Reuters analysis.

The attack, which came seven months before an election in which Erdoğan hopes to extend his 20 years in power despite Turkey’s deep economic troubles, has put national security back on the political agenda.

Jailed Kurdish leader Selahattin Demirtaş also raised questions about the government narrative on the recent bombing in a column he wrote for the T24 news website.

Demirtaş asked why Interior Minister Süleyman Soylu hastily announced the origin of the bomber as the Syrian Kurdish provinces of Afrin or Kobani, warning that the government might be trying to use the attack as a pretext for a military incursion into Syria to score political points ahead of the elections.

Demirtaş also questioned the motives of the attacker and her identity, alleging that such an attack could not have been perpetrated without help from actors working for the state.

On Wednesday a report by the Diken news website revealed that Ammar Jarkas, another suspect detained by Turkish police in connection with the bombing and whom pro-government journalists claim masterminded the attack, had been living in Turkey for nearly a decade and co-founded a car rental business in 2020.

A day after the attack, police detained Albashir in a house raid in İstanbul and the government announced that she was trained by the PKK.

The Turkish government and pro-government media’s haste to jump to conclusions after the attack was criticized by some analysts, who claimed that determining the facts after such attacks in such a short period of time is not likely.

The attack, which came seven months before an election in which Erdoğan hopes to extend his 20 years in power despite Turkey’s deep economic troubles, has put national security back on the political agenda.