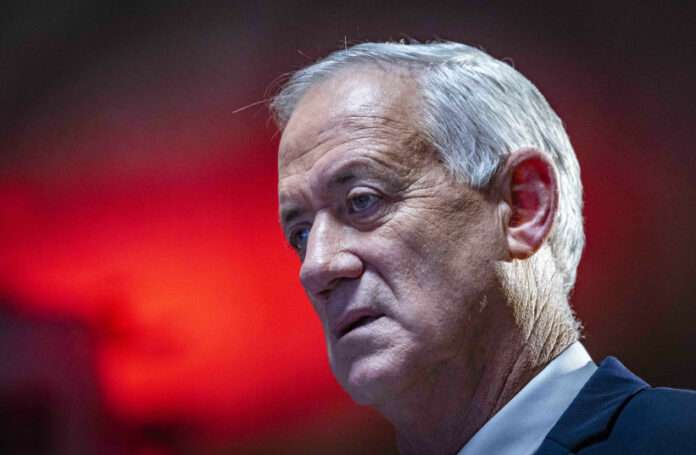 A senior security official denies that any deals are set to be signed and says the Israeli visit to Turkey is to build trust.

By ANNA AHRONHEIM
Minister of Defense Benny Gantz at a state Memorial ceremony for the fallen soldiers of the Yom Kippur War at the military cemetery memorial hall on Mount Herzl, October 06, 2022.
(photo credit: OLIVIER FITOUSSI/FLASH90)

Defense Minister Benny Gantz took off to Turkey on Wednesday, as the two countries are poised to establish stronger military ties with the aim of strengthening regional security and stability.

The visit, the first by an Israeli defense minister in over a decade, comes just days before the election.

Gantz will meet with his counterpart Turkish Defense Minister Hulusi Akar and be welcomed by an honor guard in Ankara.

A senior security official told journalists that it is a “historic visit” that will focus on the building of trust between the two officials.

What will Gantz and his Turkish counterpart discuss?

According to the senior official, both countries have their own interests in the resumption of ties, with Israel hoping to become a stronger strategic player in the region, especially regarding Iran. And Turkey is seen as a key player in the region, including in Syria where Israel has been working for over a decade to thwart Iran’s plans for a forward base against the Jewish state.

According to the official, Iran’s involvement in Syria will be one of the issues discussed between Gantz and Hakar.

“The signing of the Abraham Accords, possible new ties with other Gulf countries, together with the integration to CENTCOM, they all strengthen the Israeli presence in the region in the region-in terms of military-defense, diplomacy and possible future industrial ties. Especially against Iran.”

“The signing of the Abraham Accords, possible new ties with other Gulf countries, together with the integration to CENTCOM, they all strengthen the Israeli presence in the region in the region-in terms of military-defense, diplomacy and possible future industrial ties,” he said. “Especially against Iran.”

“We need to engage with everyone,” he added.

Turkey and the Palestinians

Turkish President Recep Tayyip Erdogan’s continued support for the Palestinians and the Gaza-based terror group Hamas was one of the reasons that security ties between the two countries was cut over a decade ago, followed by the Mavi Marama raid.

According to the official, Israel will continue to place pressure on Ankara regarding Hamas which continues to support, plan, and fundraise for Hamas terrorists to carry out attacks in Israel.

Just last week the Shin Bet (Israel Security Agency) announced that three Israeli-Arabs had been arrested for planning attacks in the name of Hamas and had met Hamas operatives in Turkey where they provided sensitive information.

“We will not only discuss the good things, but the challenges and obstacles that remain,” the official said.

Akar was quoted by Turkey’s Hurriyet News that during the visit, “we will evaluate the general situation. Our policies and opinions are certain. The Republic of Türkiye is following a very transparent policy. We will explain these.”

Israel and Turkey fully resumed ties after a decade-long diplomatic cooling in August, including reinstating ambassadors and consuls-general.

The rapprochement comes after a deterioration in ties that began in 2008, with Operation Cast Lead, and reached their nadir in the wake of the 2010 Mavi Marmara raid by Israeli commandos on a Gaza-bound ship trying to break the naval blockade of the Hamas-run enclave.  Then, 10 pro-Palestinian Turks who were part of Turkey’s Humanitarian Relief Foundation (IHH) were killed after they attacked the commandos.

Following the raid, Ankara broke off relations with Jerusalem.

The two countries had for years been close allies in the defense industry, with security cooperation, intelligence sharing and military training. The relationship began in the 1960s and peaked in the 1990s with the 1994 Defense Cooperation Agreement and 1996 Military Training Cooperation Agreement.

The senior security source said that defense deals will not be discussed during the visit.

Those two agreements made the military-security ties one of the closest in the Middle East. The two countries used to participate in annual military drills, but following the downgrading of ties Jerusalem turned instead to Turkey’s adversary, Greece and the Greek Cypriots instead.

The connections with the Greeks and the Cypriots are “exceptional” the source said, adding that the relevant officials in those two countries were made aware in advance of the growing ties with Ankara.

Though the two countries have normalized ties again, Israel does not plan, however, to restart military cooperation at the same level yet with Turkey. Nevertheless, in September, a Turkish warship anchored in Haifa Port as part of a NATO patrol in the region.

Six years after Ankara broke off relations with Jerusalem following the 2010 incident, Turkey and Israel normalized ties and sent ambassadors to respective capitals but the ties once again cooled after the United States moved its embassy to Jerusalem in 2018.

Lahav Harkov contributed to this report.