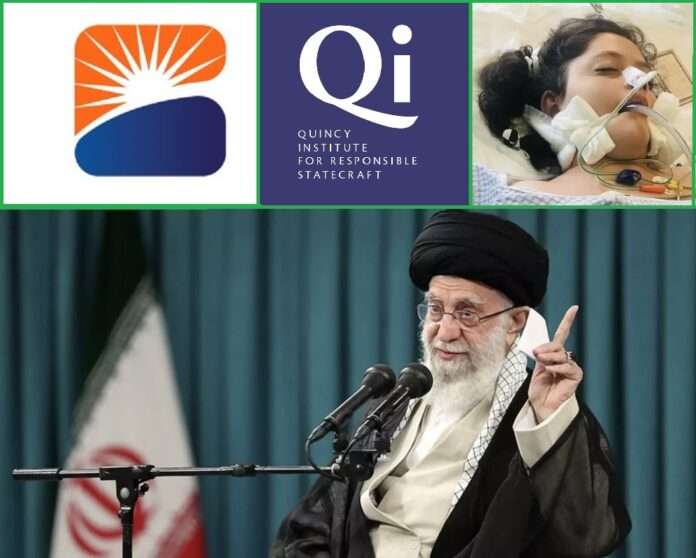 Two American think-tanks accused of serving as unofficial agents of foreign Islamist powers are working in close partnership in an apparent reflection of broader Islamist alliances in the Middle East.

The alliance came to light on October 11 when the Qatari-affiliated Democracy for the Arab World Now (DAWN) heralded its lobbying efforts with the Iranian-linked Quincy Institute in a shared statement calling on U.S. lawmakers to tighten restrictions on foreign lobbying and distance the U.S. government from the “human rights-abuser,” Egypt. The two groups are demanding greater transparency with foreign lobbying of the U.S. government.

Farhad Rezaei, a senior research fellow with the New York-based Philos Project, is troubled, but not surprised, by the partnership between DAWN and the Quincy Institute.

“DAWN and the Quincy Institute have a lot in common, including anti-Israel policies, whitewashing war crimes, and promoting dictators with terrible human rights records across the globe,” he said. “Their mission is to make the United States appease brutal autocrats and kleptocratic regimes and to take a much tougher approach to US regional allies. Their unholy alliance is nothing else but more support for the most notorious theocratic and autocratic regimes in the world.”

Ben Freeman, a staffer at the Quincy Institute, was equally harsh in his assessment of Elshami’s work for Egypt, accusing him of using his status as former chief of staff for Speaker of the House Nancy Pelosi to “promote support for a dictatorship that is squashing the Egyptian people.”

Ironically, the Quincy Institute has its own close ties to another dictatorship in the Middle East. Some of the organization’s leading figures have apparently liaised for officials of the Islamic Republic of Iran. Since the death of Mahsa Amini in mid-September, the Iranian regime has spent the past few weeks arresting and killing people in the streets as they protest the killings and arrest of women who refuse to wear hijabs as demanded by the regime’s morality police.

The institute ran interference for the regime on October 4 when it downplayed the protests and encouraged American officials to ignore them. “Biden and his European allies should ignore the hawkish instrumentalization of the protests in Iran to pressure for an exit from the nuclear talks, and instead do their best to pursue the agreement,” the institute declared.

Working with the Quincy Institute is a bad look for DAWN, a Washington, D.C. based think tank that claims to promote “democracy, the rule of law, and human rights for all of the peoples of the Middle East and North Africa.”

DAWN’s partner in the anti-Egypt influence operation, the Quincy Institute, was cofounded in 2019 by Trita Parsi, founder of the pro-Tehran National Iranian American Council (NIAC). The institute was launched with just enough seed money from sources as various as Soros and Koch to suggest to lawmakers that this is no mere one-sided operation and is therefore worth listening to.

Journalists have long criticized Parsi for being the Western mouthpiece of the U.S.-sanctioned Javad Zarif, who served as Iran’s foreign minister through August 2021. Hassan Dai, an Iranian dissident and Parsi critic, proved a connection between Parsi and Zarif when he obtained copies of emails exchanged between the two.

Mehrdad Khonsari, a former Iranian diplomat who is now a prominent opposition leader living in the UK, suggests the establishment of the Quincy Institute may have been an attempt to promote NIAC’s pro-Iranian agenda under another brand name.

“The appearance by the Quincy Institute to have a broader scope than Iran-US issues feels more like a ploy to camouflage the more obvious connections which NIAC was accused of having with the Iranian regime,” he said, adding that “their so-called academic analysis of contentious US-Iran issues ultimately boils down to a de-facto endorsement of Iranian views.”

Iranian dissidents have raised concerns about Negar Mortazavi, a Quincy Institute affiliate. The Quincy Institute has consulted her on Iran policy, but dissidents complain of her associations with Javad Zarif, Iran’s former foreign affairs minister.

When the University of Chicago planned to host Mortazavi for a talk about the power of Iranian women, thousands expressed their opposition to her through a change.org petition that gained nearly 40,000 signatures in 48 hours. The since deleted petition read: “Mortazavi is a fierce supporter of US-Canada designated Javad Zarif who, on his trip to US (sic), publicly denied the existence of political prisoners in Iran.”

And in April of last year, Iranian dissident Hossein Ronaghi called Mortazavi “the symbol of discrediting the Truth.” The regime has arrested Ronaghi numerous times for calling out its atrocities against the people of Iran. They threw Ronaghi into prison again in mid-October, where he reportedly remains with rapidly deteriorating health.

Mortazavi also writes for DAWN. Within days of the vicious stabbing of Salman Rushdie, Mortazavi interviewed DAWN Fellow Nader Hashemi about the attack. Hashemi expressed his concern that the attack, “will reinforce this already you know negative image of the Islamic Republic of Iran within the West….” When asked about the politics of the attack, Hashemi said he found it “more likely” that the “Mossad” (Israeli intelligence) backed the attack than Iran.

DAWN’s Executive Director Sarah Leah Whitson, who previously served as Managing Director for Research and Policy at Quincy, also trumpets Mortazavi, as does DAWN Fellow Marc Owen Jones. All this indicates that DAWN, like the Quincy Institute, is not the pro-democracy organization it claims to be. Rather, it is instead an unofficial agent for Qatari interests in the United States.

The late Jamal Khashoggi founded DAWN with three friends a few months before his murder. In the wake of his death, DAWN has nearly sainted the man, whitewashing his years as a terror supporter and Qatari operative. Continuing the legacy of Khashoggi, DAWN primarily criticizes the enemies of Qatar, an ally of Iran and an adversary of its Gulf neighbors.

The October 11 press release notes the Egyptian firm that hired Elshami is paying $65,000 a month for its lobbying. This pales in comparison to the money spent by Qatar, a country with a very poor government and human rights record.

In 2020, Qatar ranked second in “spending the most on foreign influence, lobbying and propaganda operations targeting the United States.” According to Foreign Agent Registration Act filings, “Qatari investments in the U.S. are expected to exceed $85 billion by 2021.” This year, the government of Qatar has spent just over $5.4 million on U.S. influence with non-government Qatari spending at just over $9.3 million. Compare that to Egypt. This year, the government of Egypt has spent $195,000 lobbying the U.S. with non-government spending at zero.

If DAWN were serious about promoting democracy in the Middle East, it would not pick and choose which regimes to call out. Rather, the organization would uphold human rights across the board, stay far away from the Quincy Institute, openly support the Iranian peoples’ fight for regime change, and condemn Qatari influence operations in the U.S.