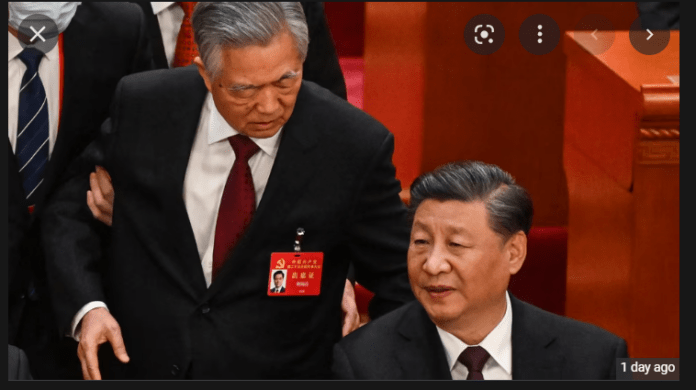 An extraordinary thing happened in China at the final meeting of the party congress over the weekend. Hu Jintao, the previous president of China, was sitting next to President Xi Jinping when two men approached from the rear. Hu rose and appeared increasingly surprised and then alarmed. A few others sitting at the lead table also appeared openly surprised, while most seemed unconcerned or were blank-faced out of discipline. Hu was escorted behind Xi, who appeared as if nothing significant was happening. It seemed to me that Xi did finally glance at him, I think with a look of contempt, but that is likely not the case, as the point of this drama seemed to be that dismissing Hu was routine. Although videos of Hu’s departure could be viewed around the world, they did not appear in China. The Chinese now have said, however, that Hu was not feeling well.

This is not the way party congresses have typically been covered in China. In the past, they were a carefully framed portrayal of the absolute unity of the Chinese Communist Party. Every public element was controlled, with no spontaneity permitted, let alone drama of this sort.

Hu may have had to go to the bathroom and needed help, or it may have been some other prosaic event. But I doubt that would require a national blackout. It is always difficult to interpret actions involving individuals. My view of the world is that individuals are defined by the world, not the other way around. So let me take a shot at seeing how China created the television drama we all saw.

The economic crisis of the past two years had to have created political divisions. After Mao, China was defined by consistent and massive growth. There was an expectation in China, shared by much of the world, that the Chinese economic miracle would continue for a long time, making China a great power.

A second problem was the South China Sea and the inability of the Chinese military to break out of America’s effective blockade. There was much talk in China and elsewhere about the surging power of China’s military and particularly its navy, but there were no actions taken that demonstrated that power. The alliance with Russia proved another serious misjudgment.

Xi came to power at the height of the Chinese growth surge. He also came to power on what appeared to be the dawning of Chinese military power. In all of this, he was attempting to surpass his predecessor, Hu Jintao. Hu had built the economy and the military and had made China into an economic presence. Xi was going to make China an economic, military and global force. It didn’t happen. During Xi’s most recent term, all of these hopes seemed to shatter.

Hu was a symbol of what China was going to become. Xi is the symbol of what China did not become. Hu, as a former successful leader of China, hovered over him, and every time Hu spoke, Xi felt the tremors. I don’t know what went on in the Chinese Politburo. Hu may have criticized Xi, as a president who succeeded when success was easy. Xi may have rejected what was said, claiming that success had become more difficult to achieve and that Hu, in his place, would do very poorly indeed. Or perhaps no words had to be exchanged, because Xi understood that he was being measured against Hu. Perhaps Hu was organizing a coup or allowing himself to become the coup’s symbol, and Xi felt he had to contain him with a very public act so that the country knew where power lay. And more important, maybe Xi wanted to frighten any enemies from acting, by showing them what could happen.

It’s hard to understand precisely what happened, but it’s easy to understand what brought us to this place. This is politics, and failure, no matter how good the excuse, is unforgiving. Xi chose to act where success would redeem him. Of course, it is possible that a battle is now raging in secret over Xi’s action. He acted, it seems, without the senior staff being told. If so, they may fear for themselves next and move on Xi. But then Xi may have anticipated this. And so the murky world of Chinese politics has yielded us a coup against a retired president. It was the act of a worried man. He will be worried until the next act.