Finland could be just weeks away from announcing plans to join NATO, meaning the government is already considering how Moscow might retaliate, according to a senior Finnish defense official.

WASHINGTON: By all signs, Finland is heading towards a decision on joining the NATO alliance within the next few months, if not weeks. And in the process, a top Finnish defense official tells Breaking Defense, the country has to prepare for the reality of a furious, but unpredictable response from Moscow.

“Of course, Russia will react, but we don’t know how. And we need to be prepared” should Finland decide to join NATO, said Esa Pulkkinen, the permanent secretary at Finland’s Ministry of Defense. “We need to be ready, of course, to face consequences.”

NATO’s vaunted Article 5 protections do not kick in for aspirant members, only ratified ones. That means from the moment Finland — and perhaps its neighbor Sweden — declares the intention to join NATO until the moment every alliance member has ratified their ascension, there is no guarantee other nations will come to their aid in response to military action by Moscow.

Pulkkinen, a retired lieutenant general who now serves as the top civil servant in Finland’s defense ministry, is at the center of the question of how Finland could handle any potential Russian threat. Speaking to Breaking Defense this week in Washington, he acknowledged that Russia’s reaction is just one of many aspects that have to be weighed in the NATO discussion.

And while Pulkkinen downplayed the likelihood of Russia launching a second full invasion of a European country, he also said his country couldn’t afford to rule it out completely.

“You cannot rule out anything. I mean, that’s something that you need to do, assess the risks. You should not exclude anything. But that risk assessment, I think, is taking place in Finland now,” he said.

Already Russia has issued warnings, like in the first week of the Ukraine conflict when a top Russian spokesperson said that the Finland and Sweden joining NATO would have “serious military and political consequences, which would require our country to make response steps.” Russia’s invasions of Georgia in 2008 and Ukraine in 2014 were seen, in part, as a way to block those nations from moving to join the Western alliance. Which means any decision to join NATO could set up a perilous moment when Russia’s best strategic course, at least in Moscow’s eyes, might well be to attack.

Many reasons why MQ-9B SkyGuardian and SeaGuardian are a number one choice for a growing number of nations.

NATO members are well aware of the issue of the gap between announcement and ascension. According to Foreign Minister Pekka Haavisto, several representatives from alliance nations discussed “what kind of security assistance [Finland will] need during that period,” during this week’s NATO foreign ministers meeting.

“This question is being asked very actively, that is, offering such help or support if there is a need for it,” Haavisto was quoted as saying by Helsingin Sanomat.

Russia’s response could come in many forms from cyber or economic action to grey zone activities and limited military operations. In that event Pulkkinen said Finland would look to the “support of our friends,” but acknowledged that until it became a full-fledged NATO member, the Nordic country would be mostly on its own. 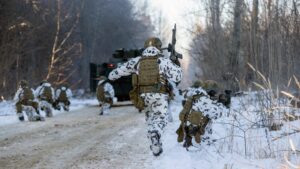 For his part, Pulkkinen made it clear he doesn’t expect nations to pledge to protect Finland during this gap period. “I think it’s unrealistic to think about,” he said. “We need to mitigate the risks by ourselves.”

Surviving a potential Russian attack during the NATO ascension process would be a two-pronged effort. The first aspect, and the most obvious, is defending Finland’s population from whatever may come over the border.

Pulkkinen seems less focused on preparing for a military invasion, as “Russia knows, and we know, that we are able to defend ourselves. We’ve been preparing ourselves for four decades.”

He also raised the question of whether Russia could actually manage an invasion of Finland while Ukraine operations are ongoing, noting how much of the Russian forces are tied up in Ukraine — around 80%, by some Western estimates. However, the mobilization of the Russian population by Moscow would leave plenty of bodies to throw at Finland — ill trained and ill-equipped bodies, but sheer quantity nonetheless.

“Militarily, we are very well prepared … of course, but there are a lot of other things Russia could potentially do — or not do, depending on their choices,” Pulkkinen said. “And I think we have means to mitigate, hopefully, with the support of our friends, in that way.”

Jason Moyer, an expert with the Wilson Center who has written extensively about Sweden and Finland’s potential paths to NATO, agreed a full invasion was unlikely, saying “I find it hard to imagine, given the extent the Russian military has struggled in Ukraine that they would have the bandwidth to put any kind of pressure on Finland if they announced they were seeking to join NATO tomorrow.”

Instead, he predicted, “Russia will likely make the usual fuss of expelling Finnish diplomats, the economic fallout will be dramatic given their proximity and trade relationship…. and there might even be an air incursion or cyber-attack. But this is a small price for the long-term security NATO provides.”

It’s against these other non-conventional responses that Finland is also preparing, Pulkkinen said, echoing comments from Finnish President Sauli Niinistö, who previously said threats could include border violations and hybrid challenges. (Notably, the day after a NATO meeting of foreign ministers, Finland’s foreign ministry came under denial of service attacks and saw a suspected violation of its airspace by a Russian jet.)

There is precedent for concern here in the experience of the two most recent NATO members: When Montenegro sought to join NATO, a coup attempted that has been tied to Russia sought to overthrow the government and install  anti-NATO leadership. And when North Macedonia was working on a referendum that would allow NATO membership, Russian influence campaigns were well underway.

Still, Moyer is also more bullish, perhaps, than Pulkkinen on what the other NATO nations could offer to ensure Russia doesn’t attempt an invasion. He suggested setting up a no-fly zone over Finland before Russia can get any planes in the air as one potential idea. And, he noted, Finland is in a better place than Ukraine due to being in the European Union; the EU’s article 42.7, which is not as strong as NATO’s Article 5, still extends some security agreements to member states.

That EU agreement is “untested,” Moyer noted, but “it’s better than what Ukraine had to work with when they were first invaded.”

Moving The Process Along

The other way Finland can succeed is by pushing the NATO process — which requires an aspirant to meet certain democratic and military readiness thresholds and for each NATO member’s individual governments to ratify them joining — to move as quickly as possible.

What a “fast track” could look like isn’t entirely clear, but both Sweden and Finland have a leg up on some other nations who have applied in the past, RAND analyst Gene Germanovich wrote for Breaking Defense last month. He cited both nation’s strong democracies and capable militaries as meeting the baseline NATO requirements. Combined with the two nations longstanding partnerships with NATO, there should be no major paperwork or inspections needed to bog things down, Germanovich argued.

“We fulfill all the political and military criteria and requirements already,” Pulkkinen said. “And that of course will be one factor we may use in terms of the negotiations with NATO, which type of processes will be used…. We do think it should have been kind of the — if not the fast track, certain parts of the formal process can be dealt quicker.”

Pulkkinen stressed several times that he is a civil servant and not a politician, and so would not weigh in on whether Finland should or shouldn’t join the alliance. But he also noted throughout the interview the groundswell of support the idea has gained in Finland since the start of the year. (A March 14 poll found support for joining NATO at 62%, a historic high — and up nine percentage points from a poll conducted on Feb. 28.)

“Finns, in general terms, think that Ukraine is like Finland in 1939. And that’s one of the fundamental reasons for the big change in the opinion and views on NATO, for example, in Finland,” Pulkkinen said.

Moyer predicts a Finnish announcement on joining NATO in a matter of weeks, noting officials have “been making the rounds and has had discussions with every NATO member state capital to secure its membership.”

The process, Moyer predicted, “would likely be a few months, but it could be shorter. We’re seeing unprecedented, seismic shifts in foreign and security policy across Europe due to the Russian invasion of Ukraine, it could only take a few weeks given the extraordinary circumstances of the current moment.” (Generally the NATO membership process takes well over a year once it has begun.)

Sweden’s population has, comparatively, lagged behind Finland when it comes to enthusiasm over NATO in recent weeks. But Pulkkinen expressed optimism that should Finland decide to jump for NATO, Sweden would likely go as well, saying “the tone and language [in Sweden] are changing. I can’t anticipate whether if that decision will be taken, it’s done together, or whether it’s done separately, but I think that if one country moves then the other moves as well. That’s my, let me say, hope and understanding.”

Added Moyer, “It seems most likely that Finland will join first, followed by Sweden. Sweden won’t be dragged into NATO membership by Finland, and Finland won’t let Sweden’s hesitation prevent them from joining. Sweden will be completely circled by NATO countries, offering a higher degree of security. The two will continue to bilaterally support one another and maintain deep levels of security cooperation.”

Regardless of the NATO question, Pulkkinen said that his recent meetings in Washington had been “very promising” in terms of pushing the bilateral security relationship to “go further.” He said topics of the meetings included increasing ties between Washington and Helsinki on the arctic, cyber and intelligence sharing.