Explained: Why is Europe keeping a watchful eye on deepening Russia-Turkey ties? 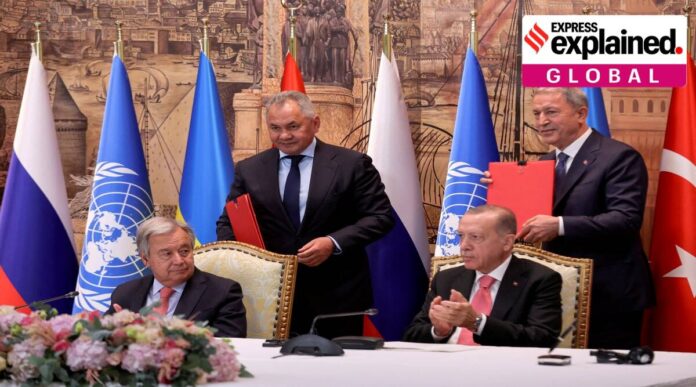 Russia and Turkey are often viewed as geopolitical rivals, whose tensions can be traced back by many centuries. Currently, their relationship appears to be growing strong, and experts say this could lead to retaliation from the West. We explain what has happened, and how Europe may react.

Russia and Turkey agreed to enhance economic cooperation at a meeting held in the city of Sochi, Russia, on August 5. This meeting was viewed with some alarm by European countries, coming at a time when the West has sought to reduce the scope of its economic relations with Russia over the ongoing war in Ukraine.

However, Turkish President Recip Tayyib Erdogan and Russian President Vladimir Putin have not always maintained warm relations with each other. The two countries are often viewed as geopolitical rivals, whose tensions can be traced back by many centuries. Currently, the bilateral relationship appears to be growing strong, and experts say this could lead to some kind of retaliation from the West. We explain what has happened, and how Europe may react from here onwards.

What is the agreement signed between Russia and Turkey?

Turkey’s TRT television channel said in a report citing statements made by President Erdogan, that the two leaders had touched upon gas exports to Turkey and agreed to partially pay for them in Russian currency, the ruble.

According to a Bloomberg report, five Turkish banks have adopted Russia’s Mir payments system for payment in rubles.

The countries also agreed to “meet one another’s expectations on the economy and energy”. Russian Deputy Prime Minister Alexander Novak told reporters: “We talked about the financial banking sector — on which big agreements were also reached — so that our commercial companies, our citizens can make transactions during their tourist trips and exchange money as part of trade turnover,” according to Russian media agency TASS.

Why are European countries concerned?

One EU official told Financial Times that the bloc was monitoring Turkish-Russian relations “more and more closely”. A senior Western official also suggested that in case of more extreme measures, countries might call for the withdrawal of investments from Turkey and stop their banks and companies from operating in the country.

Another source of concern could be Russia’s Mir payment system, the Financial Times reported, which has been adopted by 5 Turkish banks. With Visa and Mastercard suspending their operations in Russia since the invasion of Ukraine, Russian tourists in Turkey can now use their Mir card, effectively circumventing some Western sanctions.

At the same time, Turkey is an important partner for the EU, without being an official member. The country has also been a longtime member of the North Atlantic Treaty Organization (NATO), the security alliance of Europe and Western countries.

It holds the key to allowing Sweden and Finland admission into NATO, which the alliance might be eager to do given the events in Ukraine. The Financial Times report also referred to Turkey’s instrumental role in dealing with the Syrian refugee crisis, stating that the country hosted around 3.7 million Syrians as part of a deal with the EU, and “helped to stem the flow of migrants to Europe.” On the whole, Turkey is an important partner with the West and taking action against it could lead to a new range of issues cropping up for the West.

Russia is a friend of Turkey but also an age-old geopolitical rival, going back to the Russo-Ottoman wars. For Turkey, Moscow’s annexation of Crimea back in 2015 has been a nagging concern and President Recep Tayyip Erdogan has said Turkey will never recognise this “illegal” action. Their strategic interests also made them take opposing sides during the Syrian Civil War.

In the last few years, Ankara and Moscow have been able to collaborate on projects, despite being at loggerheads at times. In their statements after the meeting on August 5, available on the Kremlin website, the leaders mentioned the ongoing construction of the Akkuyu nuclear power plant, which has been backed by the Russian firm Rosatom since 2010. When completed it would be Turkey’s first nuclear power plant.

They also referenced TurkStream, an underwater gas pipeline through the Black Sea that “directly connects the largest gas reserves in Russia to the Turkish gas transportation network, providing reliable energy to Turkey, South and Southeast Europe,” as per its website.

On the other hand, the US sanctioned Turkey in 2020 under its Countering American Adversaries Through Sanctions Act (CAATSA), for purchasing the S-400 air defence missile system from Moscow. India has also purchased this system but got an exception from the imposition of CAATSA by the US government.

Erdogan neither supported the invasion of Ukraine, nor has Turkey joined the Western-led economic boycott of Russia. This middle position was again utilised by Turkey recently, when it brokered the grain export deal between Ukraine and Russia in July, which unblocked Ukraine’s important ports on the Black Sea. For how long this position can be maintained in the face of Turkey’s increasing proximity with Russia, is the question that remains.