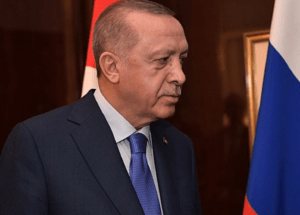 EXECUTIVE SUMMARY: The EU does not have the option of being indifferent to the antics of neo-Ottoman bully Recep Tayyip Erdoğan. Doing so would discredit the EU and weaken its soft power. But sanctions, if miscalculated, could create new problems if they go beyond the desired target. Surgical precision will be needed.

Due largely to a blend of over-ambitious policy objectives, an assertive neo-Ottomanism, a newfound hard power as a means to augment soft power, and colossal policy miscalculations, Turkey has become the only country in modern history to be officially sanctioned by Russia and is facing the threat of European Union (EU) and US sanctions—all in less than five years. And this occurred at a time when Turkey’s economy is fragile due to fundamental balance of payment imbalances, two-digit interest and inflation rates, soaring unemployment, and a cash-strapped public vault, all of which have been exacerbated by the COVID-19 pandemic. The Turkish Central Bank’s net foreign currency reserves are at an all-time low of negative $46.5 billion, and the Turkish lira has lost 30% of its value over the course of 2020.

The punishing Russian sanctions came at the beginning of 2016, shortly after Ankara shot down a Russian Su-24 fighter jet over Turkey’s border with Syria on the basis of the claim that the Russian aircraft had violated Turkish airspace. Within six months, the sanctions had cost the Turkish economy billions of dollars in lost exports and a 90% drop in Russian tourist arrivals in Turkey. President Vladimir Putin agreed to gradually lift the sanctions only after President Erdoğan officially apologized to him in June 2016—six months after threatening that “Turkey would shoot down every foreign aircraft that violates Turkish airspace.” Erdoğan’s apology also came with a tacit endorsement of Russian clout in the Syrian civil war.

Five years after Turkey shot down the Russian bomber, Erdoğan challenged the US to impose sanctions on his country. “Whatever your sanctions are, don’t be late,” Erdoğan said in response to uncertainty over possible sanctions being considered by Washington in retaliation for Ankara’s purchase of the Russian-made S-400 long-range air and anti-missile defense system and for bypassing US sanctions on Iran via a Turkish state bank. President-elect Joe Biden will choose—if he decides to revoke the Countering America’s Adversaries Through Sanctions Act (CAATSA)—from a menu of economic sanctions on Turkey. (Although President Trump has held off sanctioning Turkey under CAATSA, the final version of the must-pass annual defense policy bill unveiled on December 4 mandates that the US president sanction Turkey for its acquisition of the S-400 system.) While the possibility of US sanctions represents a potentially multibillion-dollar threat to Turkey’s already ailing economy, this threat is not an imminent danger.

But then there is the EU. The threat of EU sanctions on Turkey is already on the table—and no matter how EU leaders behave at their summit on December 10-11, EU sanctions on Turkey will remain an option for the foreseeable future. The hostile atmosphere between Ankara and Brussels and potential escalation in various disputes are too real to allow the EU to drop the sanctions card altogether.

Until recently, it was Turkey’s exponentially widening democratic culture gap that effectively halted accession talks with the EU. Now the problems are an even wider democratic deficit; the Cyprus dispute, to which is linked the conflict over hydrocarbon exploration off the divided island; military and political conflicts with Greece; and a recent “mini clash of civilizations” between Ankara and Paris. Most recently, tensions arose after a German frigate that is part of an EU mission enforcing an arms embargo against Libya intercepted a Turkish freighter in the Mediterranean Sea and carried out what the Turkish government dismissed as an “illegal” search. Shortly before that, in June, France said one of its frigates was “lit up” three times by Turkish naval targeting radar when it tried to approach a Turkish civilian ship suspected of involvement in arms trafficking.

The sanctions menu the EU is considering probably includes measures designed to limit Turkish hydrocarbon exploration, likely in shipping, banking, and energy. Another option, supported in particular by Austria, is to end a plan to broaden Turkey’s trade preferences with the EU. Some sanctions look inevitable, but the question is what the markets will bear.

A September report in the German newspaper Die Welt pointed out that Turkey’s economic problems may be its own fault, but they could spread to Europe and become a problem for the West, especially if the Turkish economy collapses completely. “Europe’s financial institutions must fear the collapse of Turkey. Many of them are still involved in the country with billions of euros, and the West has a lot to lose. This makes sanctions more difficult—and strengthens President Erdoğan’s authoritarian position,” the article said. “These are the European banks which, even after four years of ongoing Turkish crisis, are still involved in Turkey with investments of billions of euros. Western financial institutions will have to fear serious depreciation if the country is to truly enter into an extensive balance of payments crisis.”

Die Welt wrote that Spanish financial institutions’ exposure to a Turkish collapse was $62 billion. That exposure is $29 billion for French banks, $12 billion for British banks, $11 billion for German banks, and $8.7 billion for Italian banks. That means lenders from five EU countries are vulnerable to a combined $122.7 billion loss.

To avoid that disaster scenario, Erdoğan has launched a new charm offensive. He is promising democratic, judicial, and economic reforms and said “Turkey’s future is in Europe,” a puzzling sentiment when contrasted to his earlier characterization of Europe as “an Islamophobic Christian club, Nazis and remnants of Nazis and fascists.”

Erdoğan fears Western sanctions because they may accelerate Turkey’s economic downfall, which could lead to early presidential and parliamentary elections that might finally bring down his government.

Sanctions and poverty will surely prune Erdoğan’s approval ratings, but they could give him a boost too. In the event of sanctions from Europe and/or America, Erdoğan will revert to his fiercely anti-Western, Maduro-esque rhetoric that “foreign and evil imperialist powers, modern-day Crusaders, are plotting all this misfortune against Turkey.” That cheap rhetoric could unite conservative and nationalist Turks behind him and augment his vote. The combined effect would probably be negative for Erdoğan, but this is not a certainty.

On the other hand, if Erdoğan thinks he can get away with his irredentist confrontation with Western civilization and pursue an even more aggressive policy without any punishing cost, he will not miss the opportunity, and that will mean more trouble for the neighborhood. It’s up to the grown-ups to find the best way to teach the bully some manners.

Burak Bekdil is an Ankara-based columnist. He regularly writes for the Gatestone Institute and Defense News and is a fellow at the Middle East Forum.