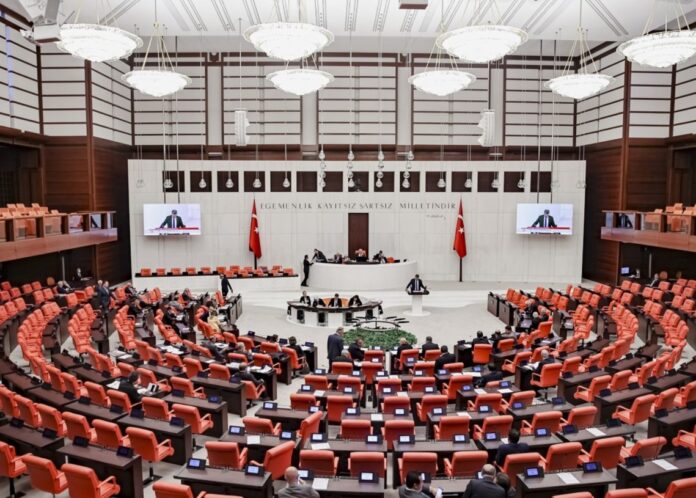 The Islamist government of President Recep Tayyip Erdoğan prevented the Turkish parliament from investigating nongovernmental organizations that were used as fronts to raise funds and recruit jihadists for the Islamic State in Iraq and Syria (ISIS).

The motion to open a parliamentary investigation into ISIS-linked NGOs was submitted to the Speaker’s Office by the main opposition Republican People’s Party (CHP) on May 27, 2019. The move came after several ISIS suspects identified some NGOs as hubs for trafficking ISIS fighters and moving funds during court hearings on deadly terrorist attacks in Turkey.

Yet the parliament, controlled by Erdoğan’s ruling Justice and Development Party (AKP) and its far-right nationalist backers, has never put the motion on the agenda, effectively killing the proposal to launch a legislative inquiry into the ISIS network in the country.

Under the current bylaws, parliamentary investigation committees have no sanctioning authority, and their reports have the status of recommendations. But the establishment of such committees helps expose wrongdoings in government institutions, motivate judicial authorities to launch criminal proceedings if necessary and inform the public about government actions.

The Erdoğan government fears a parliamentary inquiry may expose links between ISIS cells and some factions within the Turkish government. A string of deadly terrorist attacks in 2015, blamed on ISIS, helped Erdoğan sustain his regime and regain the majority in parliament he had briefly lost in the summer 2015 elections.

2015 was an exceptional year for Turkey in terms of back-to-back terrorist attacks that hurt the opposition parties, which were forced to cancel campaign rallies under the threat. On July 20, 2015, 33 people died in a suicide bomb attack in the Suruç district of Şanlıurfa province. On October 10, 2015, 103 people were killed in a bomb attack on a crowd gathered in front of the Ankara Train Station. Both were blamed on ISIS, although the terrorist group has never officially claimed responsibility for either.

In an intelligence report published earlier by Nordic Monitor, it was revealed that İlhami Balı, the mastermind behind these deadly attacks, stayed in a hotel under the control of Turkish intelligence agency MIT in Ankara on May 25-27, 2016. His connection to the agency suggested Balı’s actions were directed by MIT, which coordinated clandestine operations within ISIS for political goals to help President Erdoğan in elections.

Balı, born in Reyhanlı in the Turkish border province of Hatay on March 17, 1982, was operating in an al-Qaeda cell before joining the al-Nusra Front in the initial years of the conflict in Syria. Al-Nusra was supported by the Erdoğan regime, which was hoping to oust the Bashar al-Assad government in Damascus and replace it with an Islamist puppet regime.

A Turkish court had previously convicted Balı — in an investigation predating the 2011 Syrian crisis — on charges of membership in al-Qaeda and sentenced him to three years in prison. Balı relocated to Syria in 2012. He later moved to ISIS, which tasked him with serving as the ISIS border chief (emir) responsible for the smuggling of jihadists and logistical supplies and the transfer to Turkey of wounded ISIL militants along the Turkish-Syrian border.

In the general election of June 7, 2015, the ruling AKP lost its majority and was unable to form a government on its own for the first time since 2003. While it was predicted that a coalition government would be formed, a new election on November 1, 2015 was declared as permitted under the constitution by Erdoğan, who undermined the coalition negotiations. Between June 7 and November 1,862 people, including security officers, civilians and outlawed Kurdistan Workers’ Party (PKK) militants, lost their lives in Turkey.

In fact, the ISIS network in Turkey was well known to the police and intelligence service. In a classified MIT report dated 2015, it was estimated that some 10,000 to 12,000 Salafists lived in Turkey. The report named the provincial leaders of the ISIS network and identified NGOs actively working on behalf of ISIS.

Accordingly, the ISIS cell networks in various Turkish provinces and their leaders were identified as the following: Eyüp Baksi in Adana province, Mustafa Dokumacı in Adıyaman, Ertuğrul Demirhan in Antalya, Mehmet Şeker in Batman, Lokman Akar in Bursa, Mehmet Erdem in Ankara, Rıdvan Yılmaz and İlker Taşer in Eskişehir, Nusrat Yılmaz in Gaziantep, Halis Bayancuk in Istanbul and Van provinces, Mehmet Sercan in Izmit, Abdulkerim Özalp in Konya and Ismail Bayaltun in Şanlıurfa.

The MIT report also profiled some NGOs as ISIS front entities that were working as recruitment and fund-raising organizations. Some of those include Genç Ensar Derneği, Genç Muvahhidler Derneği, Ahsen İlim Kültür Eğitim ve Yardımlaşma Derneği and Islah Derneği.

In 2016 the Erdoğan government summarily and arbitrarily shut down over 1,600 associations and foundations, mainly that were linked to opponents of the Erdoğan regime from the Gülen movement, a group that is critical of Erdoğan on a range of issues, from corruption to the government’s links to armed jihadist groups. Yet those linked to ISIS were not touched, and they continued their operations, in some cases under new names and formations.

The Erdoğan government has proven to be lenient and forgiving when it comes to punishing dangerous jihadists from al-Qaeda and ISIS. It kept delaying the implementation of many recommendations made by the Financial Action Task Force (FATF) to align Turkish laws and regulations with global rules for preventing the financing of terrorism and money laundering activities.

A US Treasury report on programs to combat terrorist financing and activities to disrupt ISIS financing released on January 4, 2021 indicated that the terrorist group continues to rely on “logistical hubs” inside Turkey for its finances.

“ISIS continued to use money services businesses, including hawalas, to move funds in and out of Iraq and Syria, often relying on logistical hubs in Turkey and in other financial centers,” the US Treasury report said.

In recent years many individuals and entities based in Turkey have been designated as financial facilitators for ISIS  by the Department of the Treasury’s Office of Foreign Assets Control (OFAC). The designations confirmed a pattern in which ISIS has been using the financial system in Turkey to fund its network while the authorities shy away from clamping down on ISIS cells.

Turkey was also accused by UN investigators of being an important hub in raising funds for ISIS-affiliated groups across the region.